Here’s a burnin’ tenor saxophone solo from the great tenor saxophonist, George Coleman.  This is from his album “Amsterdam After Dark”.  The solo is from the tune “Apache Dance” which has a solo section over the changes of “Cherokee”.

I was actually given this solo transcription by a teacher at Berklee College of Music almost 30 years ago.  (I think it might have been Bill Pierce).  I remember practicing this solo like crazy at the time.  I was captivated by George Coleman’s extensive use of the bebop scale in this tenor sax solo.   I had heard of the bebop scale before, but to be honest, I never really heard much use of it in actual recordings. This was the first recording and transcription where I saw it in action.

George Edward Coleman is an American hard bop saxophonist, bandleader, and composer, known chiefly for his work with Miles Davis and Herbie Hancock in the 1960s. He was named a National Endowment for the Arts Jazz Master for 2015. 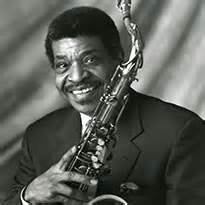 It was my first or second semester at Berklee and I was really wanting to get Cherokee down and burnin’ fast.  I remember taking the lines and concepts and transposing them to the alto key and trying to get them mastered.  I spent thousands of hours on these lines and over the course of time, the transcription was destroyed or lost. Pages were ripped, pieces were missing, pages were lost…….

Years later when I started teaching, I decided to transcribe the solo myself to use with my students who were working on the bebop scale material.  (It wasn’t very hard as I knew many of the lines already.)    Working on the scale and links from my “Mastering the Bebop Scale” books is one thing, but nothing replaces hearing the lines and concepts pieced together in a real recording to hear how they can be used.

This is another solo that could keep you busy for a few years.  It’s not enough to just play through the solo and get it up to speed.  You really want to take apart the lines, understand the concepts and transpose them to other keys to really get them mastered and into your own playing.  Enjoy!!

*As a side note:  For those of you who like Eric Alexander, you can hear that Eric was heavily influenced by George Coleman as you listen to this CD.  Even in this solo, there is a lick at measures 193-195 that I have heard Eric Alexander play hundreds of times.  As you listen to George Coleman, I think you will hear many similarities as far as phrasing, articulation, lines and sound.

If you enjoy this solo be sure to check out my extensive books and lesson on “Mastering the Dominant and Major Bebop Scale” below:

Thank you so much for the great job you are doing to help further our jazz studies. Though I make my living as a repairer of musical instruments I am a student of jazz and have been fortunate enough to be involved with a big band and a combo for the last several years. As my children began to leave “the nest” I had decided to dedicate the next half of my life to a more serious study of the sax but I didn’t know exactly how I would go about doing this until a friend of mine turned me onto your si… END_OF_DOCUMENT_TOKEN_TO_BE_REPLACED