Here’s another great Michael Brecker tenor sax solo transcription I am excited to share with everyone. This transcription has been available out there on the internet for many years now, so I have never posted my transcription here on my site, but I kind of wanted to now for sentimental reasons.

This transcription includes the chords which go with the solo which I haven’t seen out there on another transcription and there are some slight differences between mine and the one already available on the internet.  The chords are from the Don Grolnick Collection which I purchased a few years ago when I was working on a transcription of “Four Chords” by Steps Ahead.

This is one of the first tenor sax solos I tried to transcribe my second year of college (I say “tried” because it was a weak and feeble attempt with so many wrong notes and messed up rhythms…..).  I was going to Ithaca College at the time and this was one of the first Michael Brecker albums that I purchased. It is Don Grolnick’s “Hearts and Numbers” album and this solo is from the song “Act Natural”. I remember cranking this tune on my record player in my dorm room at Ithaca College and playing along with the record trying to sound as confident and “BA” as Michael Brecker did on the tenor saxophone. I had no idea what the chords were but I knew it was in E minor in that first section of the solo and I really played the tar out of that first 16 bars of the solo over and over again.

To be honest, I think I played bits of this solo on almost every E minor solo I took for the next 10 years! It still comes to mind almost every time I am playing in E minor because it is so ingrained in my brain (especially measures 9-11).

This solo was a huge awakening for me because, although the tune sounded like it was in E minor (I am talking in the key for Bb tenor sax here, this would be D minor for concert instruments), Michael Brecker was playing lines from the B altered scale all over the place.  The first 16 bars of this solo are really a great lesson in how you can play in an E minor tonality and use lines based off the E minor pentatonic (EGABDE), the E blues scale (EGABbBDE), the E dorian scale (EF#GABC#DE) and the B altered scale (BCDEbFGAB) to take things more “outside” the tonality (“outside” is a term that means playing lines that sound very dissonant against the harmony).

As I practiced to this song everyday, I really learned how you could use these four elements and mix them together to form a really interesting solo over a minor tonality.  This was like my own personal lesson from Michael Brecker! 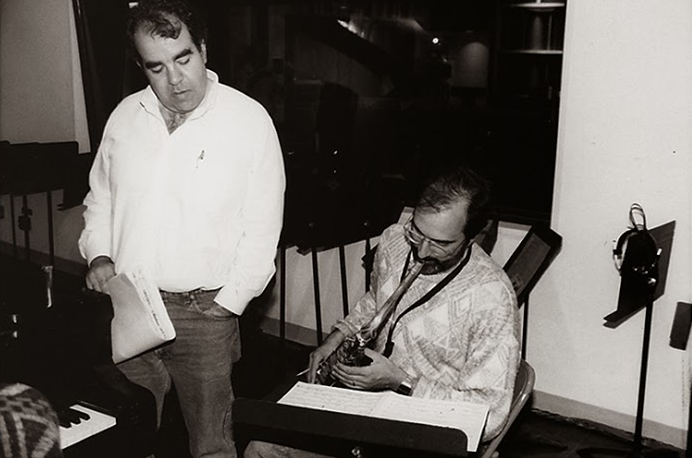 Michael Brecker and Don Grolnick in the 80’s

One of the most important lessons to be learned from Michael Brecker during these daily personal sessions with his recordings, was to play with an 80% sound. To fill the room with tone and to play with confidence!  Michael Brecker played with such an authority and confidence, even if he played wrong notes, you would never know, because he played them so confidently!

I remember seeing him in person a year later in Buffalo NY with Steps Ahead, and he seemed so quiet and humble to me as he walked out and I watched him talking to the audience and interacting with the band.  I thought “Is this the same guy I was listening to on the recordings?”

Michael Brecker and Don Grolnick in the 80’s

Then the music started and there was no question, Michael started playing his tenor saxophone and it was like he owned every corner of the room.  When he took a sax solo, it was so commanding and powerful that you couldn’t turn away.  I remember sitting in my seat and having so much excitement and energy that I felt like I couldn’t contain it!  I didn’t know what it would take or even if I could ever do it but that was how I wanted to play!

Thanks again to Michael Brecker. The anniversary of his death passed a couple of weeks ago on January 13th. It’s hard to believe you have been gone for 14 years already. Your contributions to music and as a person are still having a lasting impact on those you interacted with and influenced as well as all those who have yet to hear your great recordings in the future.  We miss you! 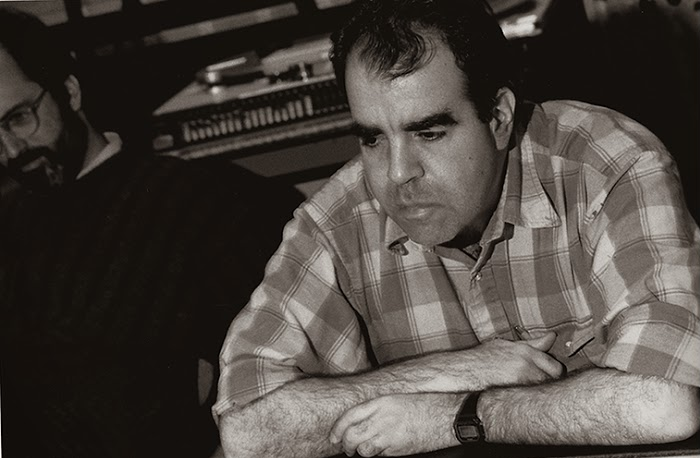 I also want to acknowledge the great Don Grolnick whose album this was.  Mr. Grolnick died in 1996 at the age of 48 from cancer. As I am now 53, 48 seems like such a young age to die. All I know of Don Grolnick is his incredible music, but I am so thankful for his creative brilliance and contributions to jazz. This album,  “Hearts and Numbers” is one of the jazz classics for me and had a monumental impact on my musical life! Thank you Don Grolnick!

If you have any thoughts on Michael Brecker, Don Grolnick, the transcription or life in general,  I would love to hear from you in the comments below.   Steve

If you like these type of outside modern sounding lines like I do, be sure to check out my Devastating Lines for Jazz and Funk Soloing for Minor and Dominant Grooves. These two books are filled with great modern 16th note lines in all 12 keys that you can learn and use while soloing. Check out all the 5 star reviews! Steve

Mr. Neff,  I want to thank you for sharing your God-given talents through your on-line lessons.  My husband, Michael, is blind, but he is a great sax player and he has been enjoying your lessons for quite some time now.  It’s not unusual for me to hear “Hey, babe, listen to THIS!” – and he will cut loose on his sax, just thrilled at what he learned during his session with you.  His excitement warms my heart!  You have no idea how much you have poured into my husband.  You have opened musical … END_OF_DOCUMENT_TOKEN_TO_BE_REPLACED

I’m an experienced player in the pop/soul/funk areas of music and, previously, classical.  Over the decades I’ve been playing, I’ve always felt that I could do what I needed in those styles of music.  However, recently I began to feel limited by my use of the same old licks. When I discovered Steve Neff’s website, and heard the audio examples based on the exercises in his books, I realized they were what I needed.  I purchased all of them and have been working on them since.  It’s very hard work… END_OF_DOCUMENT_TOKEN_TO_BE_REPLACED

Your material is great! I got your New Altissimo Lesson 6 months ago and I have learned more from that than in all my 44 years of playing! I appreciate your down to earth teaching method and I really appreciate the heart that you teach with. I have been a subscriber to your lessons for the past 6 months and I have learned a great deal. Over that period of time I have had some questions and you have never failed to respond. Thanks! I have already recommended your lessons to a number of players in… END_OF_DOCUMENT_TOKEN_TO_BE_REPLACED

Just a brief note to compliment you on your teaching skills and in particular for the honesty of your lessons.  I am a returning alto sax player in my 50’s and I was looking for a no nonsense, straight to the point kind of guidance. I had intended to email you with a few questions regarding the use of the bis key but then I noticed that there was a lesson on that specific topic and after viewing it,  all my questions were answered. I once took a group lesson with a well known professional sax … END_OF_DOCUMENT_TOKEN_TO_BE_REPLACED