Here is a killer Joel Frahm lick that I picked up off of a Facebook video below. Joel is trying out a TT tenor saxophone mouthpiece that he sounds terrific on (he hasn’t even taken off his winter hat or coat which cracks me up…..like he just walked in off the street).  At the :08 mark he plays a fast lick that I immediately transcribed in my mind (Just joking, but I did run up to my office and take about 1/2 an hour to transcribe it immediately after hearing it……..). 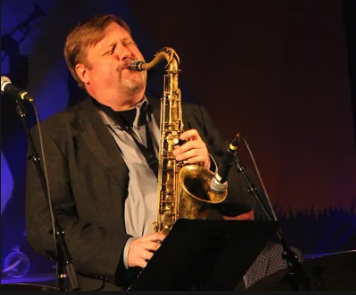 If you like Joel Frahm’s playing, make sure you check out Joel’s recordings!  I have most of them and they are terrific!  Thanks to Joel Frahm for being a continual inspiration to the saxophone world!

If you like these type of outside modern sounding lines like I do, be sure to check out my Devastating Lines for Jazz and Funk Soloing for Minor and Dominant Grooves. These two books are filled with great modern 16th note lines in all 12 keys that you can learn and use while soloing. Check out all the 5 star reviews! Steve

I bought Steve’s dominant bebop book and took a couple of online lesson from him. I really appreciated Steve’s careful listening of what I wanted to get done in a lesson and his clear, concise ideas on next steps to improve my playing and musical interpretation.  His mastering  the Dominant Bebop Scale has lots of exercises to use a scale that addresses the largest percentage of chords I come across in pop/blues music. The dominant V7.  Needless say it has improved my playing.  I teach and a… END_OF_DOCUMENT_TOKEN_TO_BE_REPLACED

Your major diatonic patterns book is great. I”m studying the first twenty patterns (first twenty pages) each day with different articulation each day and slowly increasing the tempo each week or so.  There is a noticeable improvement in finger coordination across all keys and its amazing how much more secure I feel on the difficult keys when attempting to play pieces with 5+ flats/sharps. I’m able to sort out the fingerings for these pieces now much more quickly than before, often in one or two … END_OF_DOCUMENT_TOKEN_TO_BE_REPLACED

I’m an experienced player in the pop/soul/funk areas of music and, previously, classical.  Over the decades I’ve been playing, I’ve always felt that I could do what I needed in those styles of music.  However, recently I began to feel limited by my use of the same old licks. When I discovered Steve Neff’s website, and heard the audio examples based on the exercises in his books, I realized they were what I needed.  I purchased all of them and have been working on them since.  It’s very hard work… END_OF_DOCUMENT_TOKEN_TO_BE_REPLACED

Thank you so much for the great job you are doing to help further our jazz studies. Though I make my living as a repairer of musical instruments I am a student of jazz and have been fortunate enough to be involved with a big band and a combo for the last several years. As my children began to leave “the nest” I had decided to dedicate the next half of my life to a more serious study of the sax but I didn’t know exactly how I would go about doing this until a friend of mine turned me onto your si… END_OF_DOCUMENT_TOKEN_TO_BE_REPLACED