Today’s review is about a great transcription book by Petter Wettre entitled “The Lighthouse Omnibook”.   This book has been sitting on my shelf for a few years but I was reminded of it the other day when John Greiner (a great tenor player that I played with at Berklee in different ensembles) mentioned the recording Elvin Jones “Live at the Lighthouse” on the SOTW forum.  I immediately thought of this great book sitting on my shelf so I thought I would do a review of it.

In 1987, I decided I wanted to transfer from my college in Ithaca NY and go to Boston to study at Berklee.   Two things sparked this need for me to transfer.

1.) We had started a little combo in Ithaca and were playing jazz in a local club when a guy asked to sit in with our little group.  I don’t remember his name and have no idea who he was but I know he said he had gone to school or was going to school in Boston.   This tenor player played over the standards like nothing I had ever heard before.  I had no idea what his lines were or how the heck he was navigating through the chords. Half the time he didn’t even sound like he was playing the changes but just playing crazy lines as he soared high above them.   It sounded amazing to me……..I thought “Maybe I should go to Boston!”

2.)  Later that next summer, I came out to stay my high school girlfriend who was living in Boston and going to Berklee as a singer.  While there for the summer, I went to a bunch of recitals and student concerts. I was blown away! I remember seeing a young Donny McCaslin playing in the performance center with Warren Hill and I was hooked.   These guys were a few years older than me but they were playing stuff I just had to learn.   I also saw George Garzone and Jerry Bergonzi playing a few times that summer which totally blew my mind even more.   I had to come to Boston! 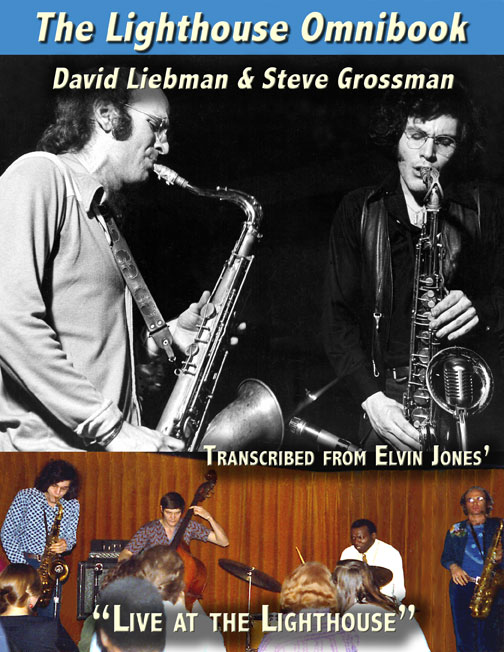 After arriving at Berklee that fall, I got down to business.   What I wanted to learn, what I needed to learn wasn’t anything I could learn in the classroom. What I had to figure out was what were these lines and sounds I was hearing that made no sense to me.  One day I was talking to a burnin’ guitar player friend who was talking about Elvin Jones’s album “Live at the Lighthouse” like it was the holy grail.   I asked what it was and he just looked at me as if I had asked the dumbest question ever asked.  “Dude, you really need to get your act together and listen to that album! Where have you been?”  I went to Tower records the next day and got it.

What makes “Live at the Lighthouse” so great is that it is an intense post-Coltrane example of where Coltrane lines and harmonic ideas could go next. This record was recorded in the early 70’s and the energy and intensity is just ridiculous.  I had never heard a recording like that before and the energy was a new experience for me.  The album features Dave Liebman and Steve Grossman on saxophones. What I heard in this recording were the sounds and type of lines that I heard when that sax player sat in with our group in Ithaca, NY.  They were the type of lines I heard in Boston when I would hear Bergonzi or Garzone playing.   I had to figure out what these lines were!

Up to this point in my life, I had studied a lot of Charlie Parker, Phil Woods and Dave Sanborn as I was mainly an alto player at the time.   Listening to these new types of lines and harmonic ideas opened the doors to a new direction in improvisation for me.

I played “Live at the Lighthouse” over and over for months.   I cranked it on my stereo and played along as best I could.  Many times not knowing what Steve Grossman or Dave Liebman were playing or why but nonetheless trying to imitate the sound and intensity of what they were playing.

Years later, when I heard that there was a transcription book of the whole “Live at the Lighthouse” album,   I freaked out.  “WHAT!”    “ARE YOU KIDDING ME?”  I had to have it and ordered it immediately.

This book is awesome.   All the crazy lines from Steve Grossman and Dave Liebman are written out note for note. (although actually playing these lines is another matter) Looking at the book for the first time you start to realize the depth of knowledge used to create these lines.  Even though they are all written out, understanding what Liebman or Grossman was actually thinking can be challenging to say the least.  The chords changes are also written out which is a huge help also.

Check out these clips from Live at the Lighthouse below:

*You can find the rest of the album on Youtube.  Have fun!

Thank you so much for the great job you are doing to help further our jazz studies. Though I make my living as a repairer of musical instruments I am a student of jazz and have been fortunate enough to be involved with a big band and a combo for the last several years. As my children began to leave “the nest” I had decided to dedicate the next half of my life to a more serious study of the sax but I didn’t know exactly how I would go about doing this until a friend of mine turned me onto your si… END_OF_DOCUMENT_TOKEN_TO_BE_REPLACED

I bought Steve’s dominant bebop book and took a couple of online lesson from him. I really appreciated Steve’s careful listening of what I wanted to get done in a lesson and his clear, concise ideas on next steps to improve my playing and musical interpretation.  His mastering  the Dominant Bebop Scale has lots of exercises to use a scale that addresses the largest percentage of chords I come across in pop/blues music. The dominant V7.  Needless say it has improved my playing.  I teach and a… END_OF_DOCUMENT_TOKEN_TO_BE_REPLACED

First, I’m really excited about your materials! This site is a vast resource for any aspiring (and maybe already inspired) jazz musicians. I’m not a sax player, I play mandolin and fiddle, but have been learning jazz and playing weekly with a quintet for the past 6 months and have been struggling with all of the issues you get into in your lessons. I bought several books and lessons and plan to continue with some others as soon as I organize my practice routine. Thanks again for a great site … END_OF_DOCUMENT_TOKEN_TO_BE_REPLACED