Now, being a primarily an alto player back in college in the 80’s I had heard of Dick Oatts but to be honest I hadn’t really heard him too much back then.  I seem to remember hearing him on a few big band recordings and a Flim and the BB’s CD I had but that was about it.  Years later I stumbled across his Standard Issue Vol. 1 CD on ITunes and after listening to a few clips decided this guy was burnin’! 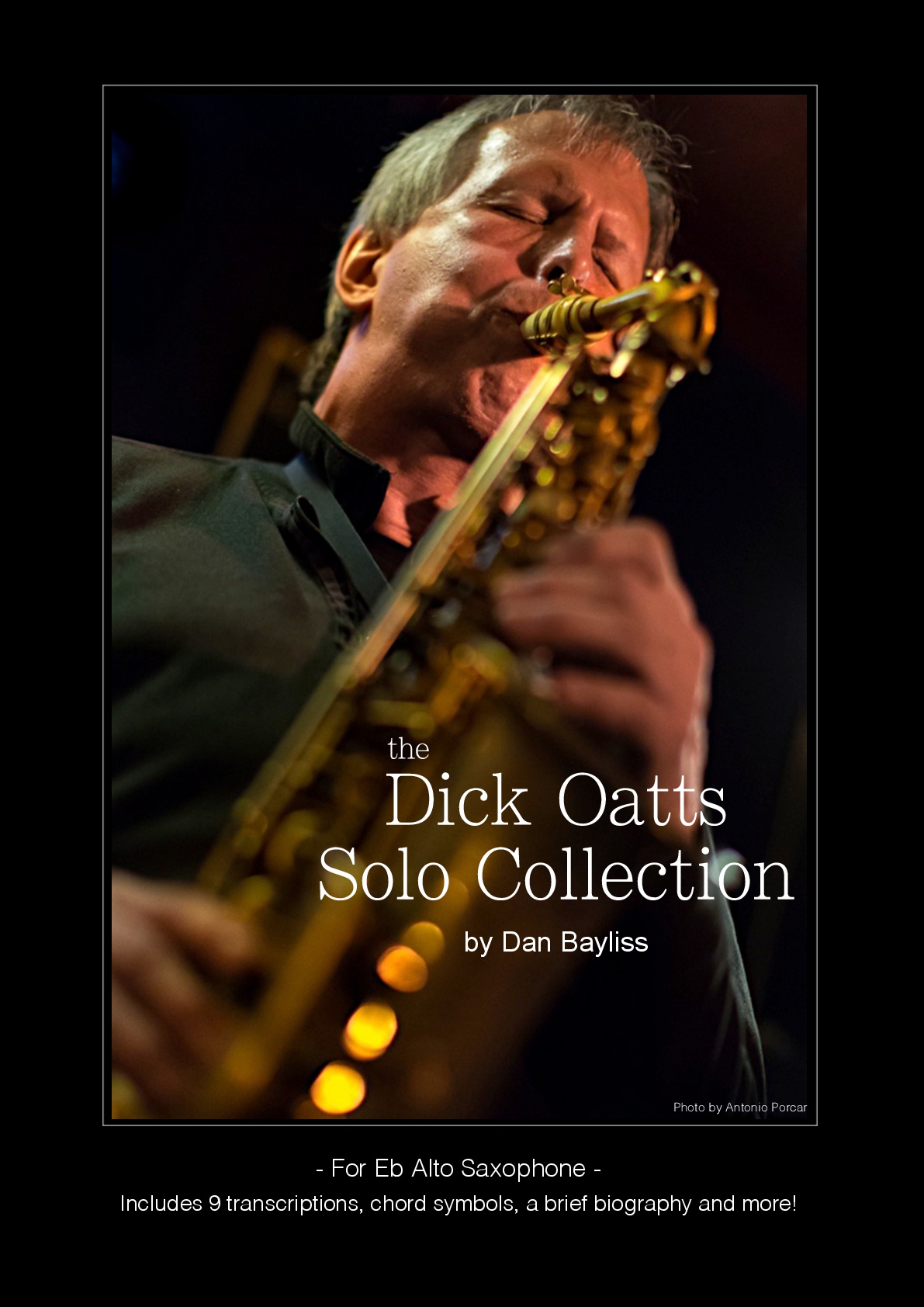 I spent about an hour this morning listening to the tracks and following along through the transcriptions and I have to say that Dick Oatts is killin’ on these standards.  Mr. Oatts does an amazing job of mixing different elements together while improvising which is what really excites me about his playing.  He has the bebop language and lines mastered and plays many of these lines throughout these solos but just when you are comfortable and think you know what he will play next he takes the line way “outside”.  This is the kind of “outside” playing that you hear from the best players that just makes you almost fall out of your chair.

Then, just when you think you have a handle on this and know where he’s going with this “outside” sound, he ventures into a melodic idea that is just so beautiful and memorable that you wonder if it is a quote of a standard you don’t know because it is so melodic.

Then , as you are diggin’ the cool melodic ideas he starts getting playful with the rhythm and mixing up hemiolas with across the bar line phrasing that has you again wondering where he’s going.

Finally, through the midst of all this he throws in some soul and blues lines that again just surprise and amaze you.  I mention all this,  because this is my favorite kind of player to listen to.  They keep you guessing and interested by creating a solo with so many layers and directions that as a musician you can’t help but be fascinated and intrigued.  You are always waiting and wondering what’s coming next……….

The 9 standards that are transcribed are:

All the Things You Are, Blues for Alice, Like Someone in Love, Little Willie Leaps, Memories of You, On Green Dolphin Street, Stella By Starlight, The End of a Love Affair, You Stepped Out of a Dream.

Honestly,  there is so much material in these 9 solos that you could spend a year just trying to play them and understand what is going on. Figuring out why these lines sound so fantastic and what Dick Oatts was thinking???   As I was working my way through listening to the solos,  I started feeling this urge to grab the print out of the book, a CD player and my alto sax and head off to a deserted island for a year of shedding.  No internet, no mouthpiece reviews, no housework and distractions,  just shedding with Dick Oatts………..Ahhhh, if only…….

A few of the things that stick out to me after the first listen are:

Upon first run through, it looks like Dan Bayliss did a great job with the transcriptions.   I can’t speak for all the notes and rhythms because I haven’t played along with the recordings yet but it was easy to listen and follow along as I worked my way through all the solos. The measures are spaced out nicely and all the chord symbols are there above the lines which is nice.  He also does a nice job with accidentals which is a pet peave of mine.  I get irritated when the accidentals don’t make sense in relation to the chord symbols but Dan does well with these.  There are a few places where courtesy accidentals would be nice (like in bar 23 of All the Things…….) These are just handy when you are sight reading and moving across the bar line to a natural note………

The only critique of the book is that I wish it had a time marker on the first page of each solo to let you know when the solo was starting on the recording.  This just makes it easier to find the starting point of each solo quicker…….(I know, Dan’s thinking “I gave you all the notes and rhythms! You need a time marker also!  Are you spoiled?)

As a person that does transcriptions my self, I will say that many of the faster lines have to to be worked on and learned side by side with the recording.  I think it is easier to figure out these lines by playing over and over with the recording until you are playing together with Mr. Oatts seamlessly.  Some of the faster lines and passages are next to impossible to read as you have 16th notes mixed with triplets mixed with 32nd notes mixed with notes in groups of 7 and other crazy stuff all going a thousand miles an hour.  The transcription gives you the notes to work with but then the key is playing them so you begin and end at the same place as the recording for those lines.  If the line looks crazy on the page then try to let your ears guide you on how it should sound.  (I use to go through this with the Omnibook when I was younger trying to intellectually figure out the lines Parker was playing when they had crazy rhythms.  Listening to the recording made it so much easier to figure out and copy…….)

Dick Oatts is an amazing player and I think all jazz sax players would benefit from spending a lot of time with these transcription.   The book is full of those lines that I used to hear as a college student when I would go visit NYC.  I would leave a club thinking “What the heck was that??” and be totally inspired to go home and shed for 8 hours in a row.   In the Dick Oatts Solo Collection, these lines are all written out for you.  You don’t have to think “What the heck was that?”, you can look down at the page and see what it is!  The great rhythmic ideas are all written out for you and the killin’ bebop lines are all right there in front of you. The book is available via Dick’s website: www.dickoattsmusic.com if you are interested.

A hearty thank you to Dick Oatts for spending his life working to master what we call “jazz”.  Thank you for all the hours spent shedding these concepts and tunes and thank you for recording these special moments so we could all listen, enjoy and benefit from them.   Thanks also to Dan Bayliss for spending the many many hours transcribing all of this.  It must have taken forever!  I am very appreciative!  Now I have to go get my alto reed wet and play some Dick Oatts solos………….

I just started looking at my lessons and I have to say, dude you are awesome.  I ABSOLUTELY will learn from you!  I started the tenor about 1 ½ yrs ago and have since picked up an alto, and more recently a soprano.  I spend most of the time on the tenor, followed by soprano, and have only gotten to the alto a few times.  I think I’ll be sticking with tenor.  I’m having a great time and hope one day to play well enough to get regular gigs.  I’ve been playing keys for about 35 years (… END_OF_DOCUMENT_TOKEN_TO_BE_REPLACED

I bought Steve’s dominant bebop book and took a couple of online lesson from him. I really appreciated Steve’s careful listening of what I wanted to get done in a lesson and his clear, concise ideas on next steps to improve my playing and musical interpretation.  His mastering  the Dominant Bebop Scale has lots of exercises to use a scale that addresses the largest percentage of chords I come across in pop/blues music. The dominant V7.  Needless say it has improved my playing.  I teach and a… END_OF_DOCUMENT_TOKEN_TO_BE_REPLACED

Hey Steve! I hope you and your family are well.  I’m just writing to say thank you so much for all the resources you have made available to the saxophone community. I have been using your material for many years and I always come back to it… in fact I just took a break from practicing to write this…( reviewing “CreatingModern II-V-I Lines with simple pentatonics”.) I am, and continue to be, one of your raving fans! Blessings to you and your family this holiday season! Wishing… END_OF_DOCUMENT_TOKEN_TO_BE_REPLACED

Thank you for all the educational information you provide.  I am a classically trained musician.  Professionally, I am a 4th and 5th grade band teacher.  I have played piano and sax for many years, but now I am starting to gig out more. I have always improvised by ear in the past. I have gotten by with my strong sense of pitch, rhythm and melodic contour. However, I want to go deeper. I want to play with a greater variety of melodic and rhythmic ideas to pull from.  I have studied to gain a … END_OF_DOCUMENT_TOKEN_TO_BE_REPLACED