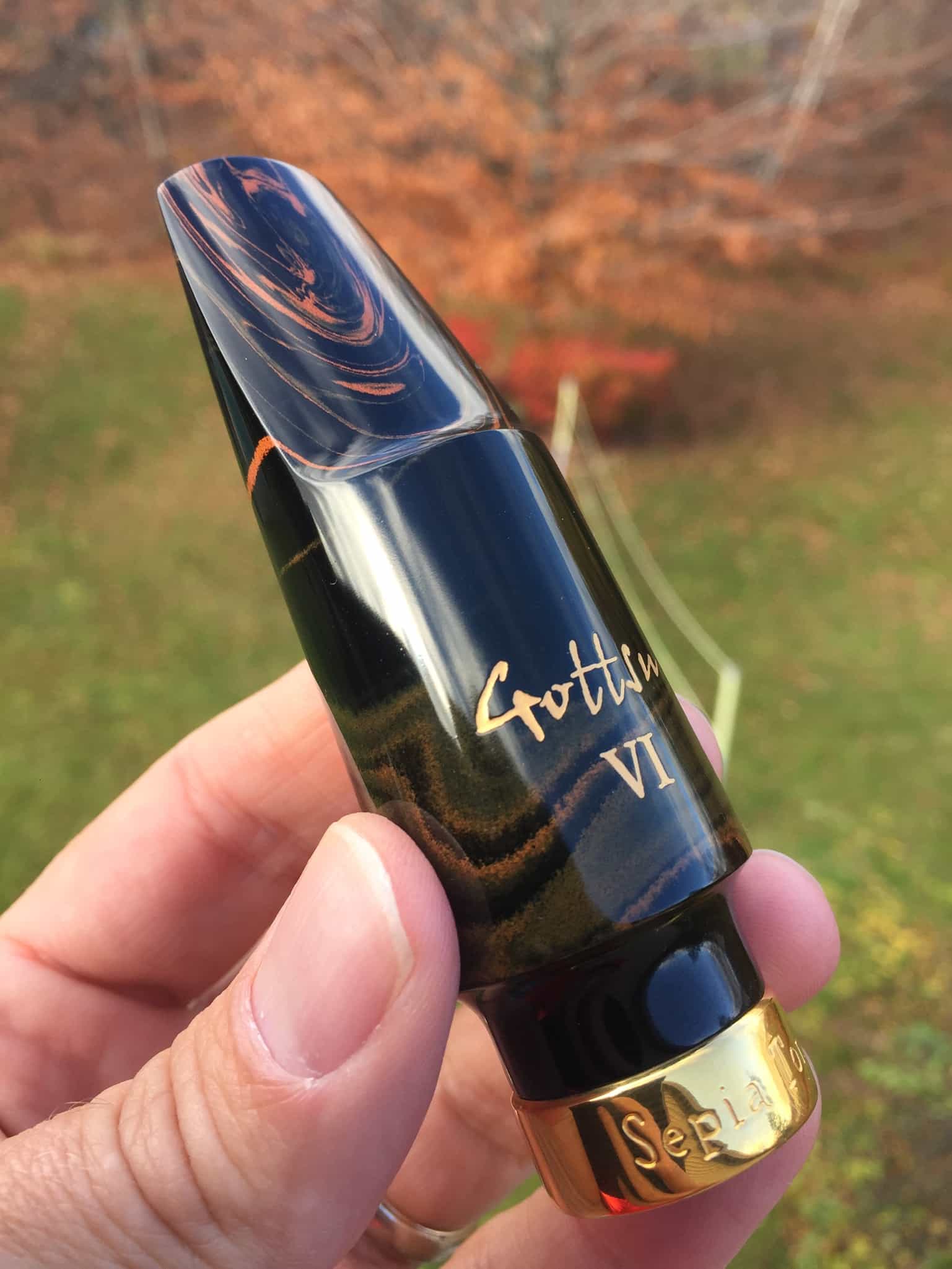 The table, tip rail, side rails and baffle look great to the eye.  The side rails are a bit thicker that the rails of the Gottsu Jazz metal tenor sax mouthpiece I reviewed last year.  The tip rail looks  thin, even and balanced.   The mouthpiece table is a little bit wider and longer than my Rigotti Gold tenor saxophone reeds and the curve of the tip rail lined up with the shape of the Rigotti saxophone reed tip nicely.  The side rails do flare out a bit as they head towards the tip rail which means you can see the tip rail extend out on the sides of the reed near the tip of the reed.  This might be a concern if the side rails were really thin but because they are wider rails the reed still seals well when the  mouthpiece seal test is performed on it. 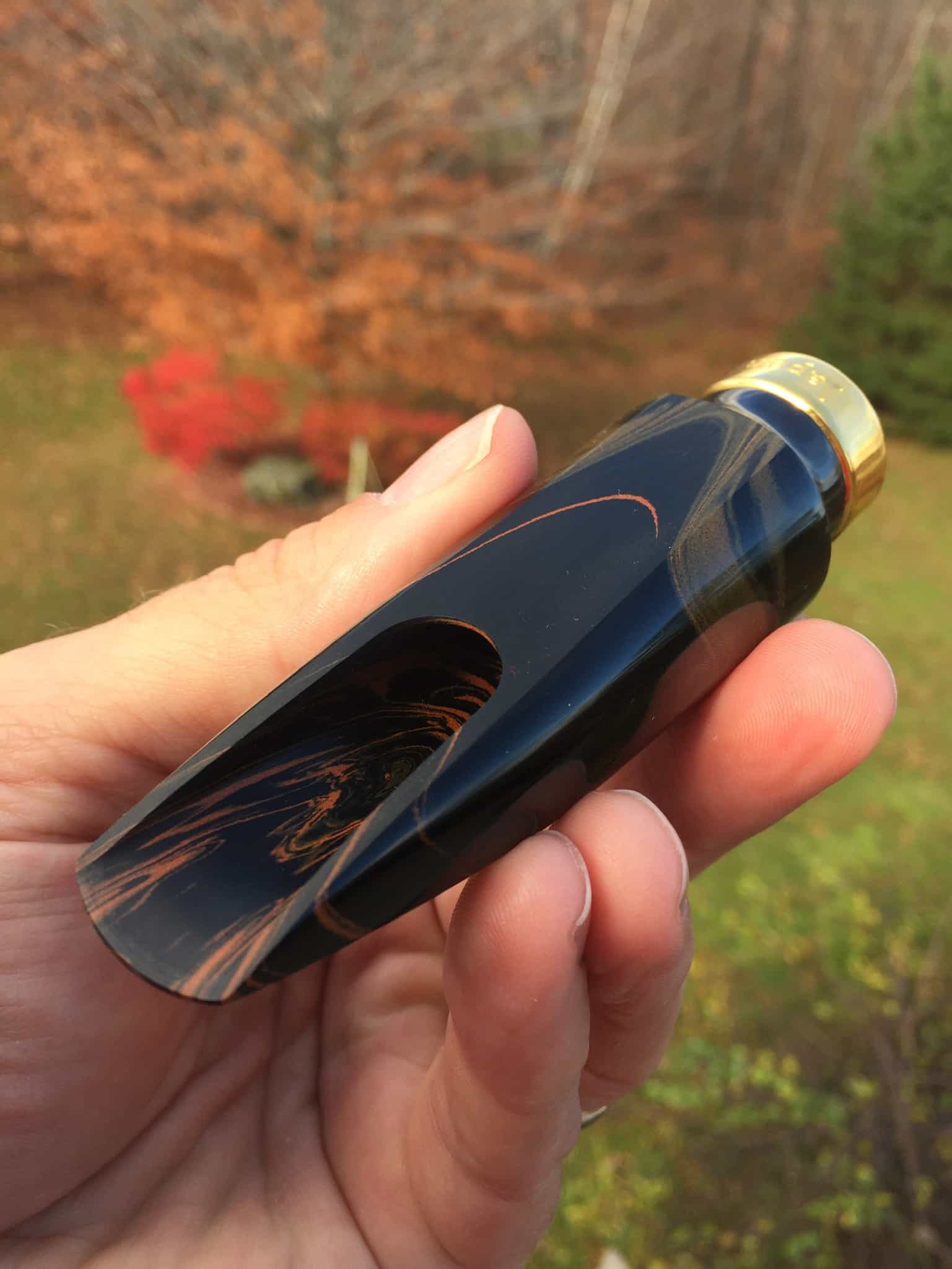 The inside of the side rails are scooped out nicely and the scooped shape continues into the round chamber as you look into the chamber from the tip. 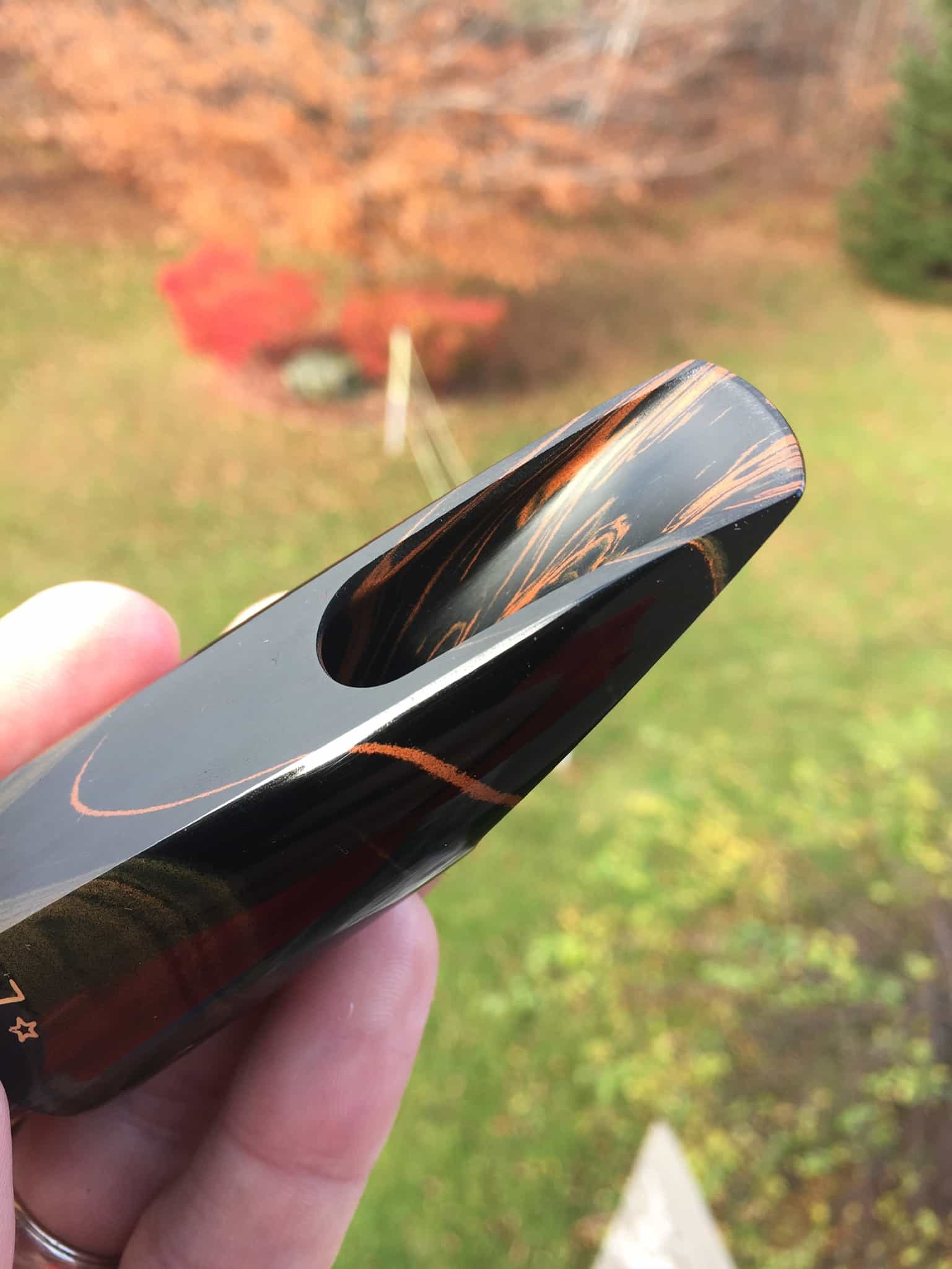 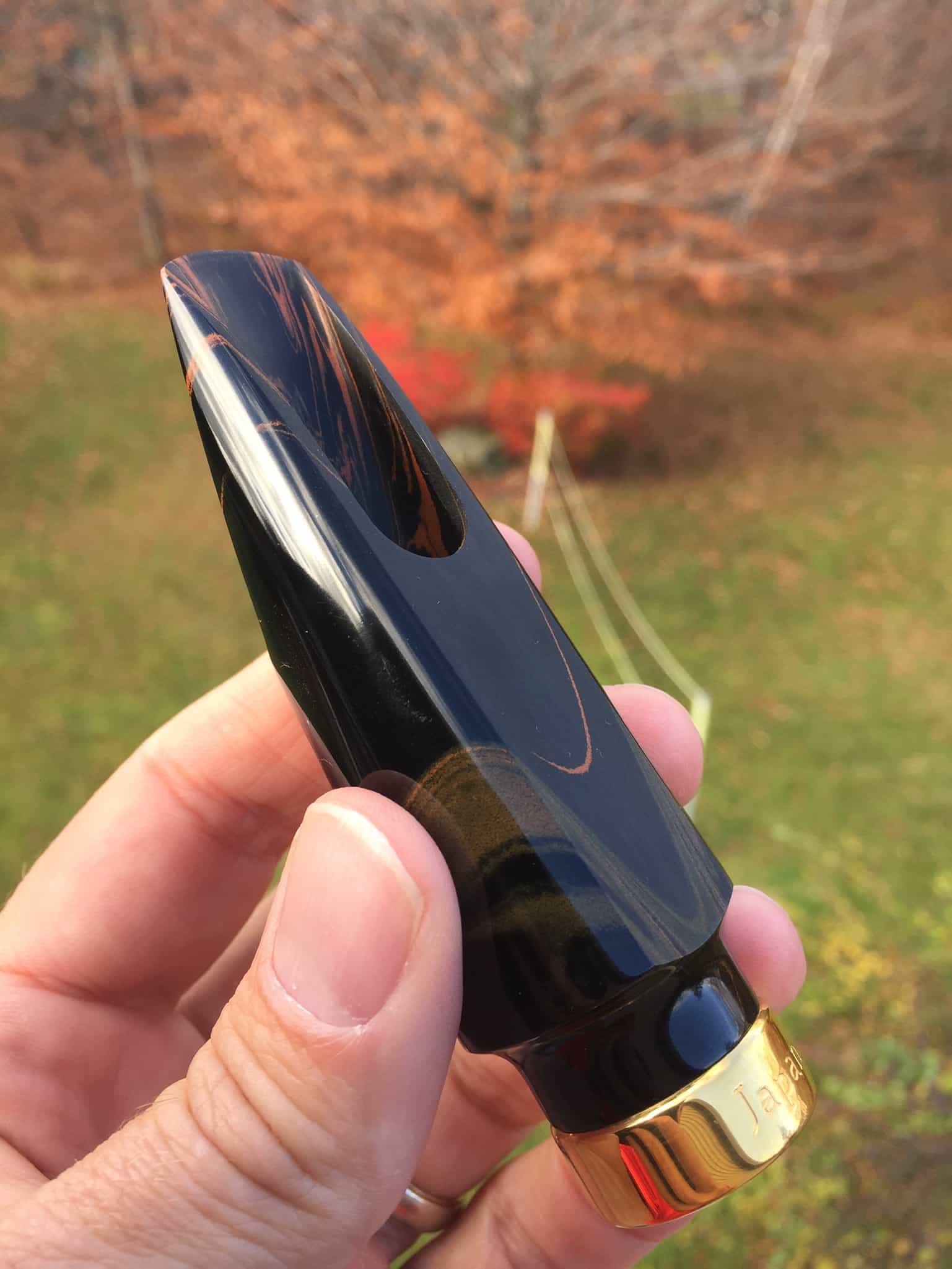 Here is a quote from the Gottsu mouthpiece website on the Gottsu Sepia Tone VI marble tenor saxophone mouthpiece:

Sepia Tone VI is the standard Gottsu model, and the most popular in Japan. The “VI” label stands for “Vintage”; it is only coincidentally also the roman numeral VI.  The features of this model are its dark, focused sound and ease of blowing. With the Gottsu Sepia Tone VI, you are free to make your own sound.

I made this model to give musicians nostalgia while playing it.  The style is designed to reflect the vintage jazz era.  Although other styles and sounds are fun to explore for a while, this mouthpiece will be the favorite that you always return to.

The reason I decided to implement 5-axis center machining at Gottsu was because of this model.  I really wanted to make the best hard-rubber mouthpiece in the world, so I spent many hours studying the programming in order to fix errors by myself.  That is how I started to create this Sepia Tone VI model. 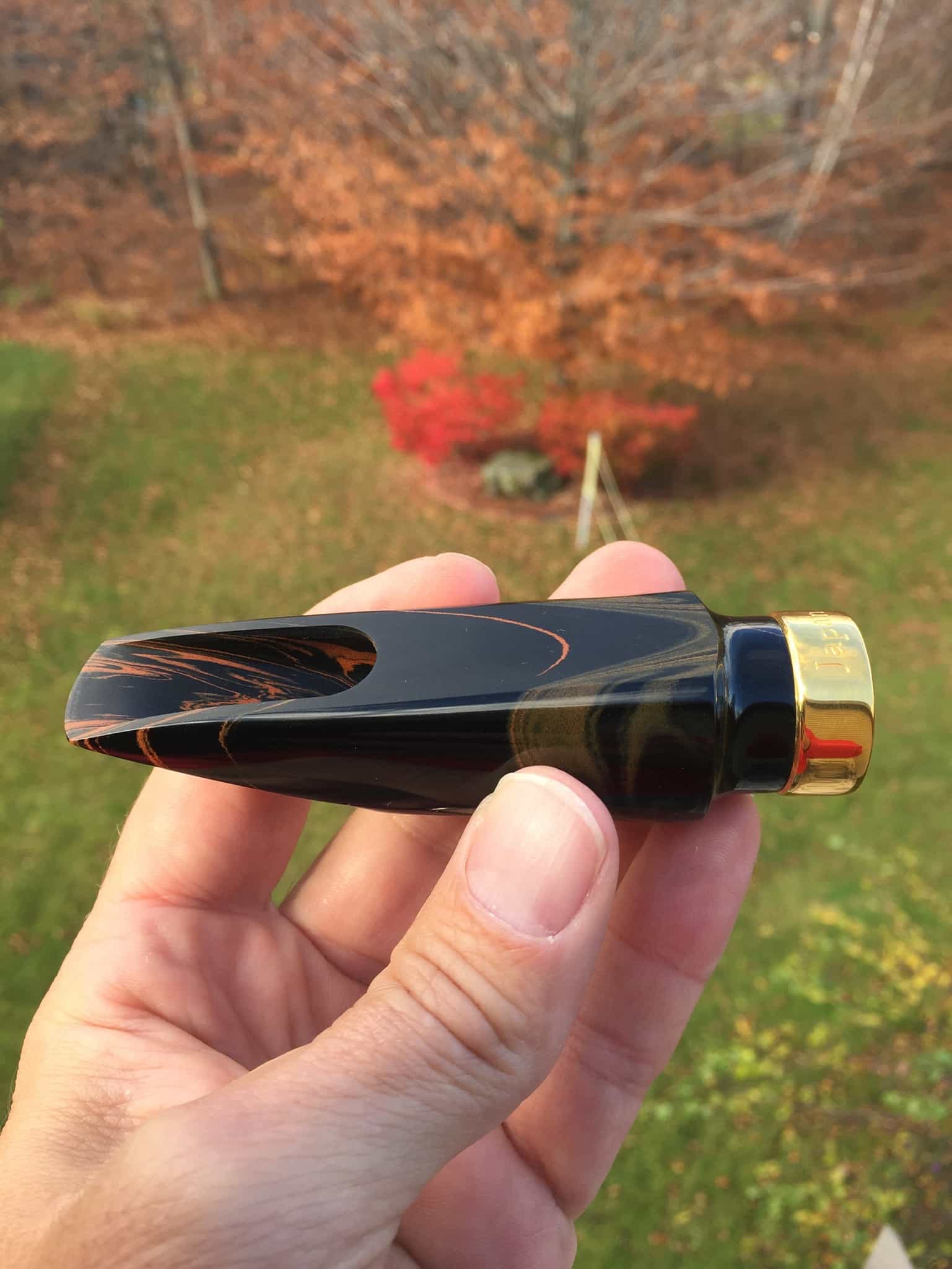 The tone of the Gottsu Sepia Tone VI tenor mouthpiece is kind of in the middle of the range from dark to bright but I did find it leaning to the dark side in my opinion.  With the softer Rigotti 2 1/2 reed I felt like the tone was brighter and more focused sounding.  With the harder reeds the tone of the Gottsu VI mouthpiece seemed richer and more complex to me but also more spread sounding.  The harder reeds made the tone less focused and pure and more spread and rich in character if that makes sense. 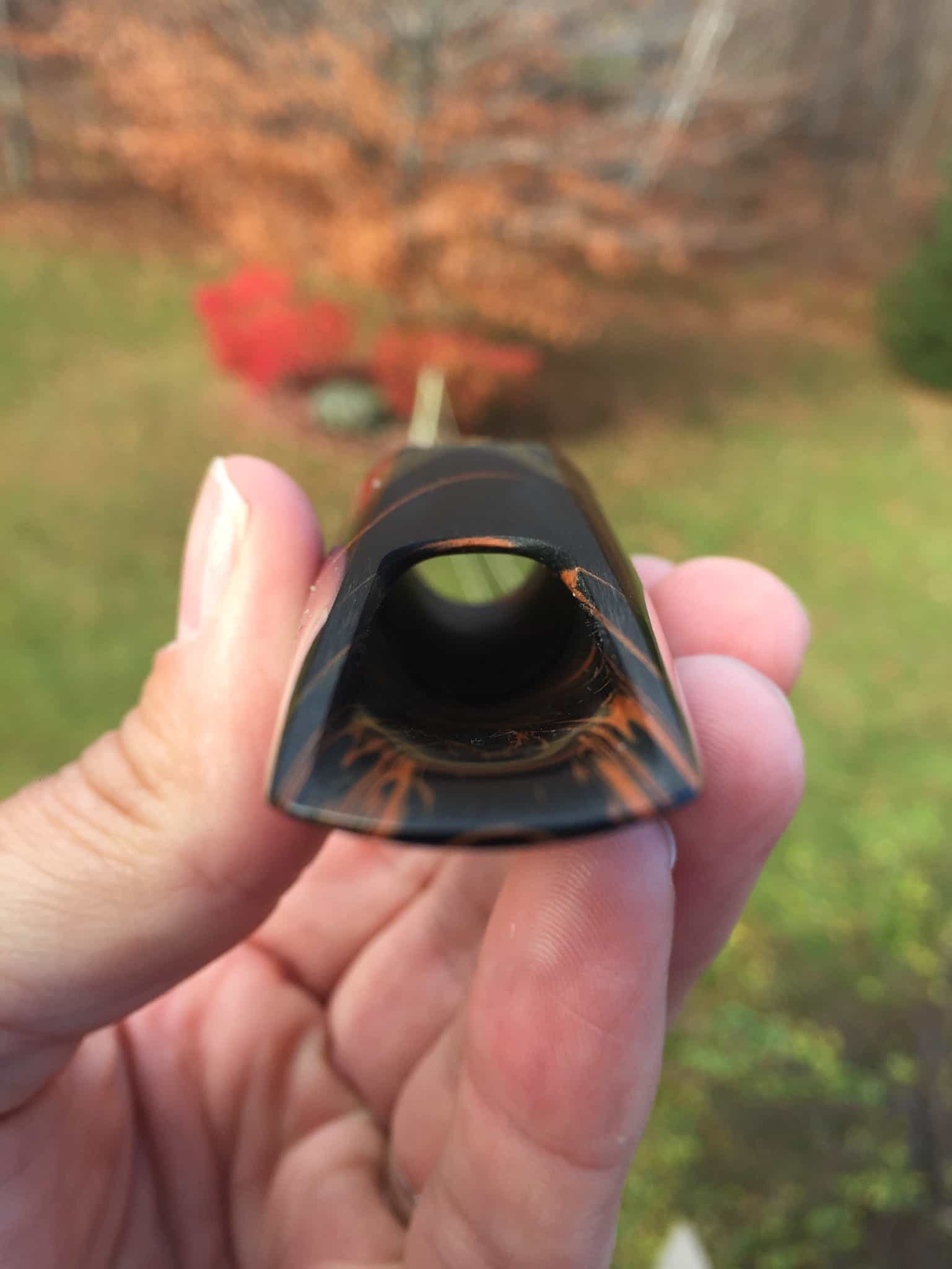 The intonation with the Gottsu VI marble hard rubber tenor mouthpieces was very good.  Nothing unusual to report but just that the intonation was as it usually is on my SBA (Super Balanced Action) tenor saxophone.

I felt like the max volume I could get out of the Gottsu Sepia Tone VI tenor sax mouthpiece was similar to what I can get out of a great hard rubber Otto Link.  I would say that between 1-10 my max volume on the Gottsu was about a 7.5 or 8.  That is common with this type of mouthpiece for me and usually I will experience more volume with a mouthpiece with a higher rollover baffle like an EB Otto Link.

Due to the darker more “spread” nature to the tone, I don’t think I would want to play this mouthpiece on a loud “top 40” type gig where you would have to cut through the band.  I don’t think it would give me enough volume and the tone does not have as many highs and brights in the sound to help it cut through as other pieces I have reviewed.

The Gottsu Sepia Tone VI marble hard rubber tenor mouthpiece is a great choice for players that want a mouthpiece that is great for jazz playing and leans to the darker side of a tenor sax tone.  It has a full bodied tone that is rich in character (especially with the harder reed on it), and is a great mouthpiece to play jazz standards on. 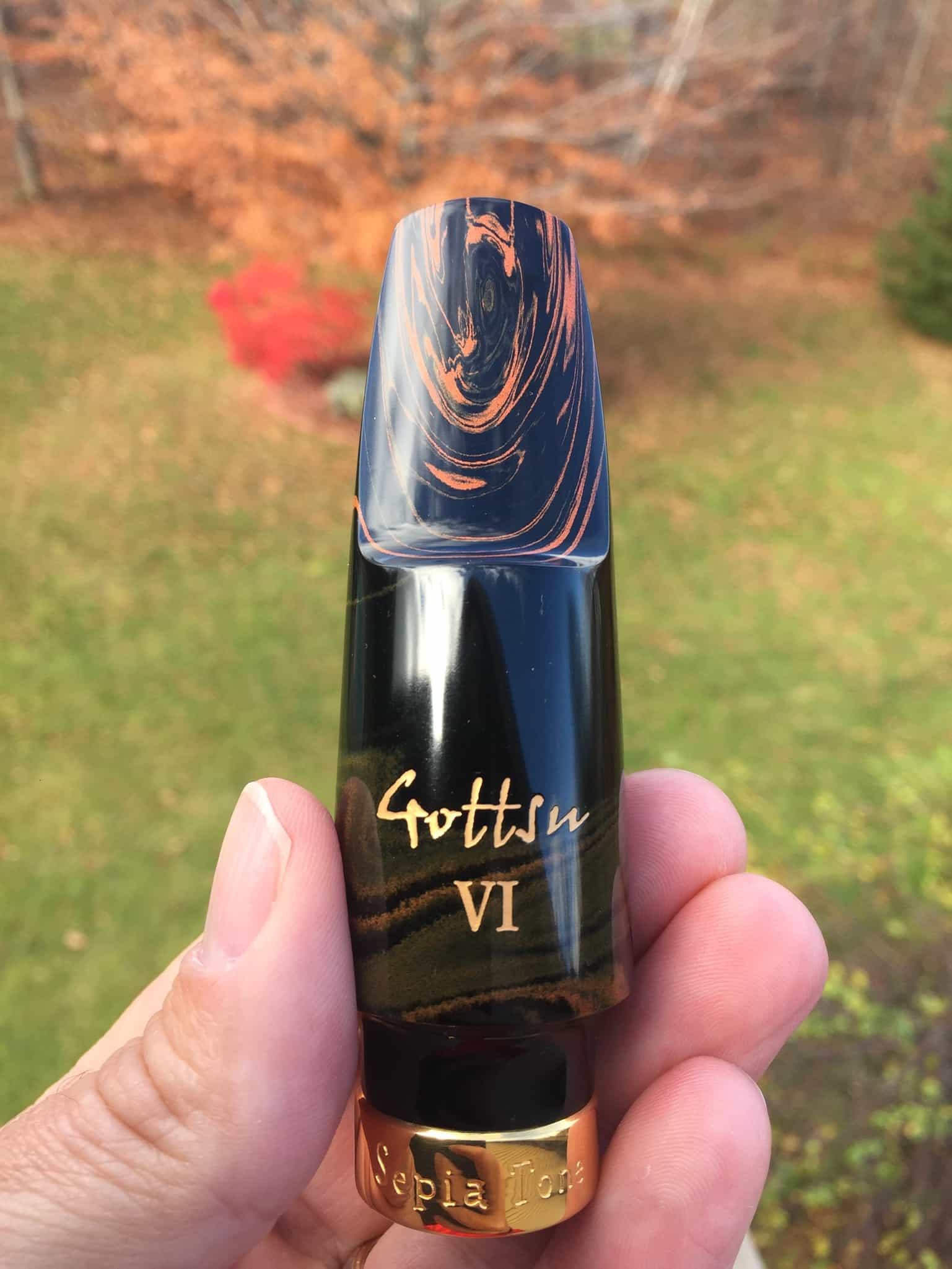 Unfortunately, I don’t see any US distributors of these Gottsu tenor sax mouthpiece right now on the Gottsu website so if you are in the US and are interested in trying one of these mouthpieces out, you might have to reach out the Gottsu company through their website for more information.

I just want to thank and commend Masahiko Goto at the Gottsu company for doing a great job on this Gottsu Sepia Tone VI Marble tenor saxophone mouthpiece and for sending it to me to try out for this review. It really is a well crafted and beautiful saxophone mouthpiece that plays exceptionally well.

If you have played or end up playing a Gottsu Sepia Tone VI marble tenor saxophone mouthpiece or have any other thoughts or comments about this review, I would love to hear what you think in the comments below.  Thanks,   Steve

I bought Steve’s dominant bebop book and took a couple of online lesson from him. I really appreciated Steve’s careful listening of what I wanted to get done in a lesson and his clear, concise ideas on next steps to improve my playing and musical interpretation.  His mastering  the Dominant Bebop Scale has lots of exercises to use a scale that addresses the largest percentage of chords I come across in pop/blues music. The dominant V7.  Needless say it has improved my playing.  I teach and a… END_OF_DOCUMENT_TOKEN_TO_BE_REPLACED