Mark Sepinuck, 10mFan as he is known in the saxophone world, has been producing a line of tenor and alto saxophone mouthpieces for the last six years that have been very popular with saxophone players around the world.  I have reviewed some of 10mFan’s tenor sax mouthpiece models in the past such as the Robusto, the Black Widow and the Classic. Recently I have also reviewed his alto saxophone models, the Showboat and the Daddy-O.

Mark has recently released another 10mFan tenor saxophone mouthpiece called the Showtime which I am reviewing today.  Mark describes it as being in the same category as his Robusto tenor sax mouthpiece which has been one of my favorite sax mouthpieces I have reviewed here so I was curious to try the Showtime tenor mouthpiece also! 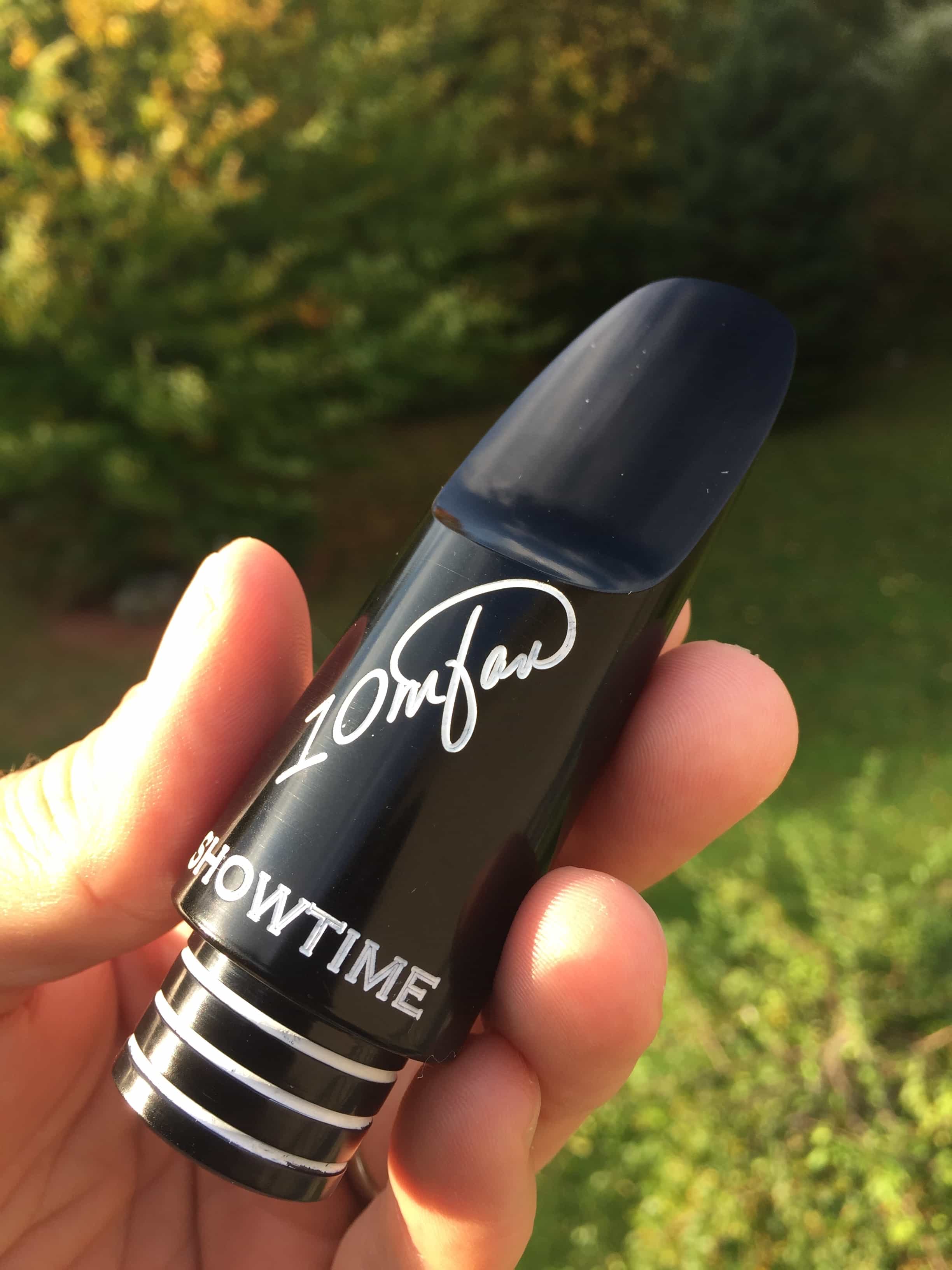 Here’s the description of the Showtime tenor saxophone mouthpiece in Mark’s own words from the 10mFan website:

This is much more free blowing than the vintage hr Links, and has much more volume available, better intonation, far more flexibility and versatility, beautiful evenness  in all the registers, and it’s simply an incredible all-around player that can do it all from warm  and lush to powerful.

Mark was nice enough to send me a sample 10mFan Showtime tenor sax mouthpiece in a 7** tip opening (.108) to try out for this review.

From above, the 10mFan Showtime hard rubber saxophone mouthpiece looks the same as the 10mFan tenor sax mouthpieces I have already reviewed.  It has the signature three white lines on the shank which I think is a great marketing idea.  You can spot these three lines from pretty far away and know what mouthpiece brand a player is using.

The mouthpiece has Showtime engraved in white on the top as well as 10mFan in cursive engraving.  When you look at the table side of the mouthpiece, the table is flat and smooth and the rails, baffle and tip look even and perfect.

The Showtime has a baffle that is similar in size and shape to the baffle in the 10mFan Robusto mouthpiece that I reviewed years ago and still have.  The main difference that I can see, is that when the baffle drops and terminates with the Robusto,  it is close to the front of the chamber.  The Showtime baffle drop and continues on right through the chamber at an angle and terminates at the back of the chamber where the bore starts.  This has the affect of making the chamber smaller than the Robusto chamber size. 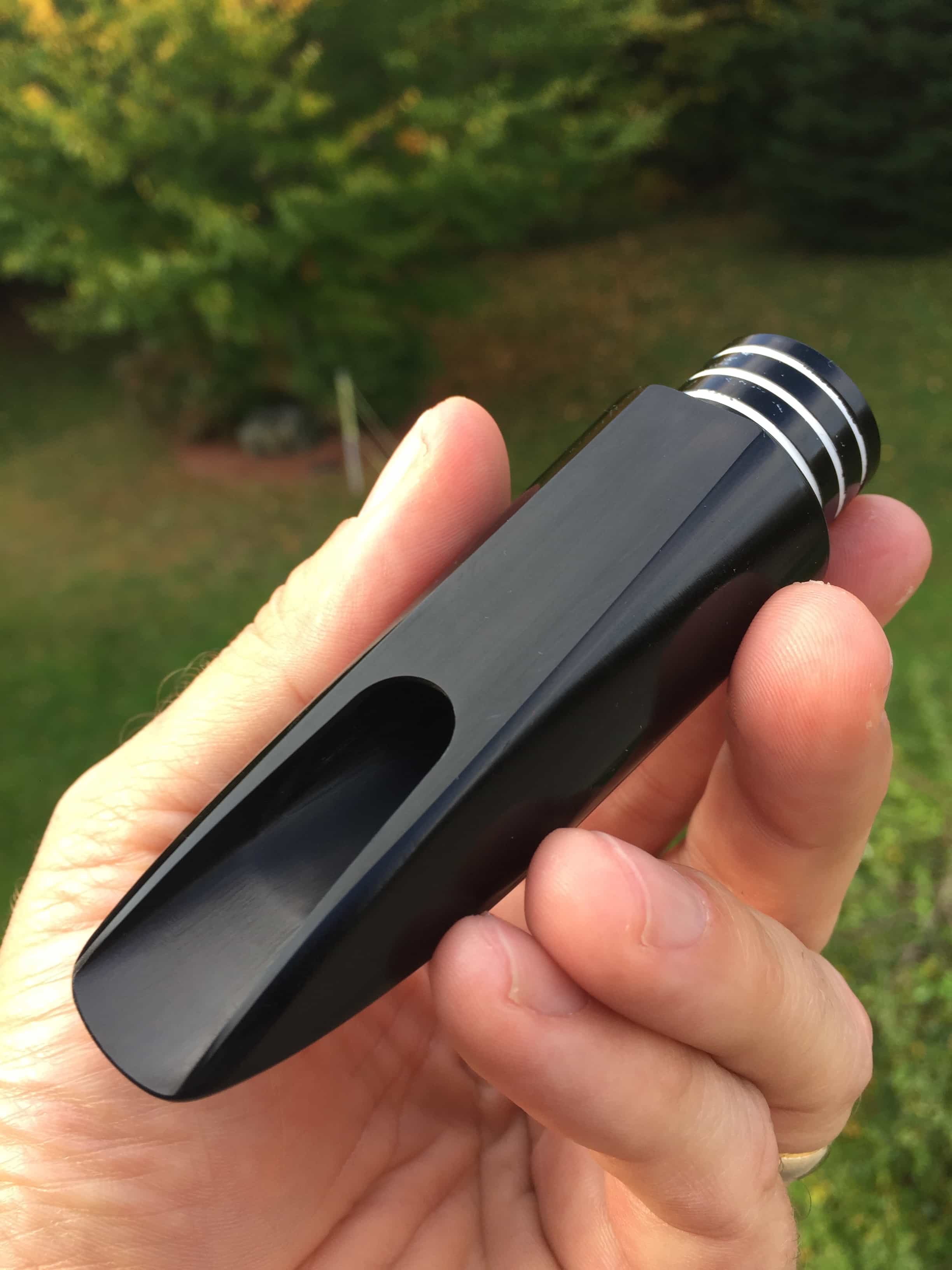 I tried the 10mFan Showtime sax mouthpiece with a variety of reeds but found that I liked the Rigotti Gold 3 Light and 2 1/2 Strong reeds the best.  The two reed strengths played with enough of a difference that I included some clips of both for you to listen to below.  I know from experience that some will dig the softer reed and some will dig the slightly harder reed……

In my opinion, the harder reed has a more thick tone that has a lot of character to it.  The softer reed has a brighter sound to the tone.  I added some reverb to each clip also so you could hear how it sounds with reverb. 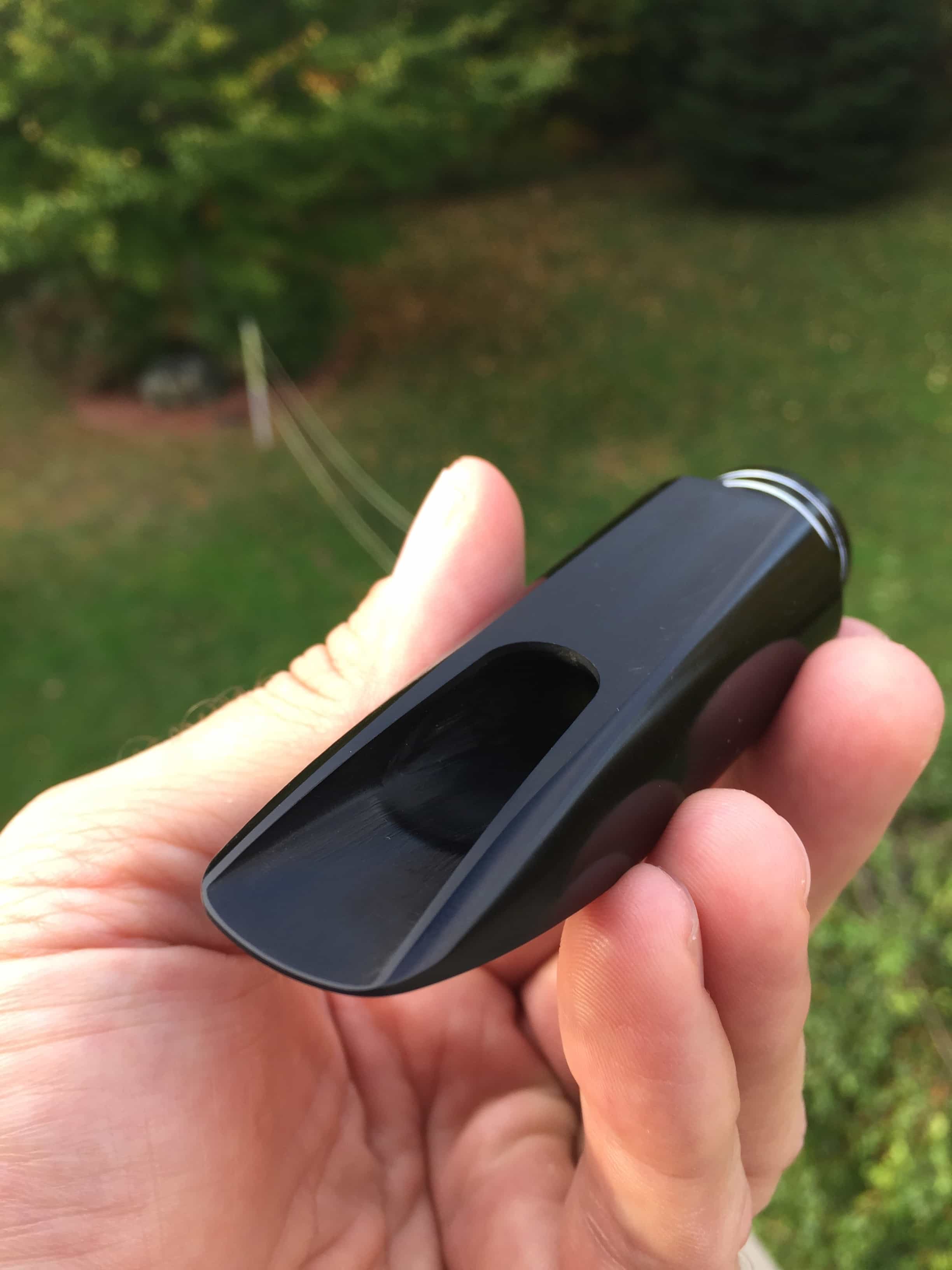 One interesting thing about the 10mFan Showtime is that this is a mouthpiece that I like the sound of in the room,  as much as I like it when playing into a mirror or wall.  This was a strange experience for me.  I would say that 99% of the mouthpieces I have reviewed, I have played into a mirror in my office to best hear how they sound.  Usually, when I play into the open space of the room, the sound is spread and diffused around the room. It is hard for me to hear the “core” sound of the tone.   When I play into the mirror,  the sound bounces right back to my ears and is more focused and compact sounding,  helping me to hear the “core” sound of the mouthpiece.

Playing the Showtime mouthpiece was quite different than this experience. When I played it into the mirror, I didn’t hear much of a difference from the sound when playing it into the open room.

I have been scratching my head and pondering why this would be so and I think maybe it is because the Showtime mouthpiece is more focused in tone already.  When I play into the room, I don’t hear that typical spread tone but I hear a more focused tone come back to my ears which I really like. 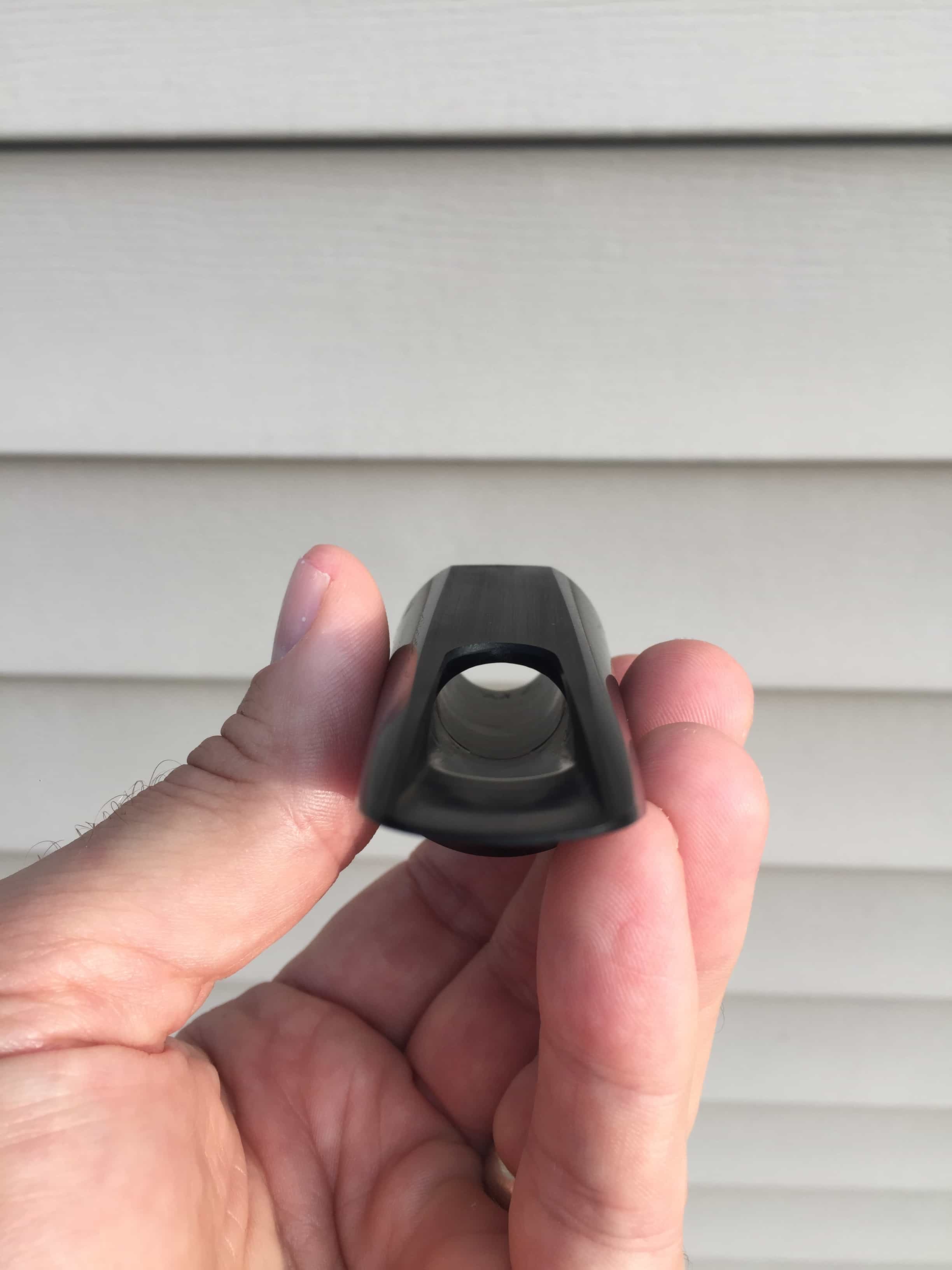 I found the tone of the Showtime to be in the middle of the bright and dark tone spectrum,  leaning a bit more to the bright side (especially with a softer reed).  The articulation was fast and clean and the intonation was very good. The response is immediate and it has plenty of volume and power when you push it.  The Showtime mouthpiece has more of a focus than Otto Links and other vintage mouthpieces which is nice these days when you are playing with electronic instruments as I have noticed that more focused mouthpieces seem to cut through the mix of a band easier in my experience.

The range of the horn seemed very even and smooth to me when playing fast which I always love.  The low notes are nice and fat and the high notes have a nice crisp brightness to them.

If you try a 10mFan Showtime tenor sax mouthpiece,  I would love to hear what you think in the comments below.  Thanks,   Steve

Also as an added addition to this review I feel compelled to post this video of Ben Wendel playing the Showtime tenor saxophone mouthpiece as well.   I love this clip!!

Disclosure: I received the sample mouthpiece mentioned above for free in the hope that I would try it and perhaps review it on my blog. Regardless, I only review mouthpieces that I enjoy playing and believe will be good for other saxophone players to try also. Steve

I just started looking at my lessons and I have to say, dude you are awesome.  I ABSOLUTELY will learn from you!  I started the tenor about 1 ½ yrs ago and have since picked up an alto, and more recently a soprano.  I spend most of the time on the tenor, followed by soprano, and have only gotten to the alto a few times.  I think I’ll be sticking with tenor.  I’m having a great time and hope one day to play well enough to get regular gigs.  I’ve been playing keys for about 35 years (… END_OF_DOCUMENT_TOKEN_TO_BE_REPLACED

I bought Steve’s dominant bebop book and took a couple of online lesson from him. I really appreciated Steve’s careful listening of what I wanted to get done in a lesson and his clear, concise ideas on next steps to improve my playing and musical interpretation.  His mastering  the Dominant Bebop Scale has lots of exercises to use a scale that addresses the largest percentage of chords I come across in pop/blues music. The dominant V7.  Needless say it has improved my playing.  I teach and a… END_OF_DOCUMENT_TOKEN_TO_BE_REPLACED

Hey Steve! I hope you and your family are well.  I’m just writing to say thank you so much for all the resources you have made available to the saxophone community. I have been using your material for many years and I always come back to it… in fact I just took a break from practicing to write this…( reviewing “CreatingModern II-V-I Lines with simple pentatonics”.) I am, and continue to be, one of your raving fans! Blessings to you and your family this holiday season! Wishing… END_OF_DOCUMENT_TOKEN_TO_BE_REPLACED

Thank you for all the educational information you provide.  I am a classically trained musician.  Professionally, I am a 4th and 5th grade band teacher.  I have played piano and sax for many years, but now I am starting to gig out more. I have always improvised by ear in the past. I have gotten by with my strong sense of pitch, rhythm and melodic contour. However, I want to go deeper. I want to play with a greater variety of melodic and rhythmic ideas to pull from.  I have studied to gain a … END_OF_DOCUMENT_TOKEN_TO_BE_REPLACED