Here is another killin’ transcription from a 10th grade student of mine here in Vermont, Jack Egan.  About a month ago, I shared an incredibly hard transcription on the site that Jack had done on Vincent Herring’s solo on “All the Things You Are”. Around that time, I shared another recording with Jack of a Youtube clip of Tim Green tearing up a blues on alto sax. This clip was sitting in a folder on my desktop entitled “Transcription Cue”.  That’s where I put all the amazing clips I find on the internet that I feel need to be transcribed someday.  Anyways, Jack was digging this clip as much as I did so again I threw out the challenge, “You should figure it out for your next transcription.” “Ok” he replies nonchalantly………..

Last week, Jack told me he had finished the transcription (after telling me he had made All-State Jazz Band here in Vermont!  Woohoo!) and then a few days later he emailed me the transcription. Upon looking at it,  all I could think was “Wow! This was a lot harder than I thought.”  Triplets, 16ths, 32nd notes, 32nd note triplets……..all mixed up and all over the place. Many of these rhythms were probably the first time Jack had encountered them.  Nevertheless,  Jack figured them out and finished the whole solo!  Again, I say “Wow!”   Great job Jack!  Check it out: 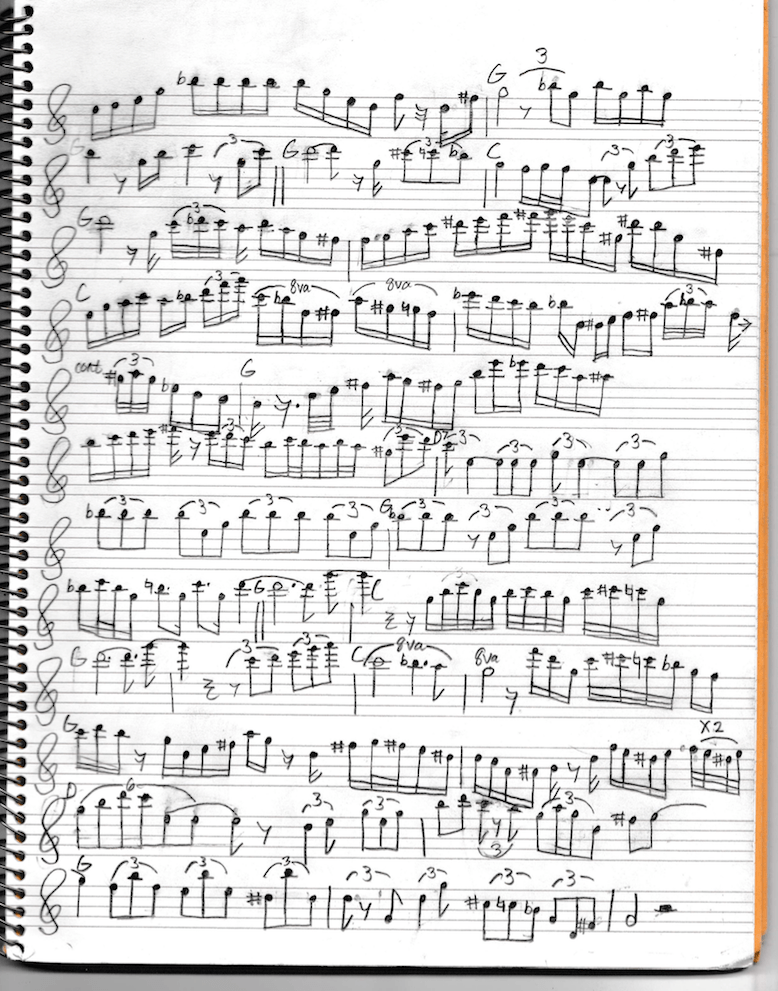 Back to the solo, I first heard Tim Green in the 2008 Thelonious Monk Competition where he came in second place. I later purchased his 2013 recording “Songs from This Season” which I loved but haven’t checked him out more than that until randomly finding the Youtube clip below one day.  He has my attention again that is for sure.

The title of this blog post states “Now THIS is how you solo on a blues!!”  Tim is bringing it on this solo! For me, it’s a great example of soloing on a blues with jazz vocabulary but also feeling and emotion.  During the solo you can hear people yelling and calling out almost like it is Gospel service.  People are moved and can’t help but yell out! This solo isn’t just about technical acrobatics but about feelings and expression.  It’s about the music coming out of the horn and moving the audience emotionally.  I  love it!

Tim does a masterful job combining so much classic bebop vocabulary with classic blues vocabulary.  He balances the flashy lines with the emotional maturity that slows down and holds out a note because it should be held out.  He slows down and repeats lines and ideas not to impress but to convey a feeling and build a story in his solo.  Masterful!

I’ve been playing this solo for the last three days and absolutely love it.  There is so much to gain from delving into it and learning from it.  I hope you find it as rewarding as I have to listen to, play with and learn from.  Great job to Tim Green for the fantastic solo and thanks again to Jack Egan for the transcription! If you want to check out more of Tim Green visit his website at www.timgreenmusic.com.  I can’t wait to hear more from this great young player.

*If you would like to support me here at neffmusic.com, you can do so on the support page of my store by debit or credit card.   Any support is appreciated and will go towards keeping this site running, saxophone reeds, mouthpiece patches, coffee, and towards justifying the many hours I spend on providing free transcriptions to the saxophone community!   Thanks,   Steve

You can follow the discussion on The Mixolydian Scale Lesson without having to leave a comment. Cool, huh? Just enter your email address in the form here below and you’re all set.