This is a very cool transcription from a 1996 bootleg recording of Vincent Herring soloing over “All the Things You Are” on the alto sax.  I have no further information about the recording except that it is from 1-27-96.

This transcription was done by a very talented 10th grade student of mine up here in northern Vermont named Jack Egan.   Jack was my one and only in-person student when I lived up in Newport Vermont for a year and a half.  I knew I was in trouble up there when I met a neighbor after we moved in and he asked me what I did for work.  I said I was a musician and he replied “What’s that?”  I was caught off guard and replied “You know….., I play music on an instrument”  He  just looked at me like I was insane, that’s northern Vermont for you……….Let’s get back to Jack, unfortunately I ended up moving about 2 hours south of Newport the next year and I was bummed that I would lose Jack as a student.  He was only in 9th grade but was doing incredibly well.

The good news is  Jack and his parents decided to continue lessons with me. They travel about two hours each way to take lessons every 2 weeks and I have to say that Jack is one of the hardest working students I have ever had.  If I say to practice something, Jack usually has it down by the next lesson two weeks later. Doesn’t matter what it is, if I say learn all the diminished scales, he comes back knowing them.  If I say learn all your altered scales, he comes back with them all mastered.   I am very proud of him and he has grown tremendously as a player over the last year.

As an example of Jack’s incredible work ethic, we were working on “All the Things You Are” together and I found this Vincent Herring bootleg of it on my computer that I shared with Jack.  We were listening to it during the lesson and I offhandedly said “You should transcribe this!”  He replied “Really?  You think so?”.  I said “Sure, give it a shot…….”

Now I have to admit,  I have said this to many students over the years but very few follow through on the challenge.  Jack was not one of those students.  The next lesson he came in with a page and a half of a transcription and said he was about half done.  Here’s a picture of his page 1: 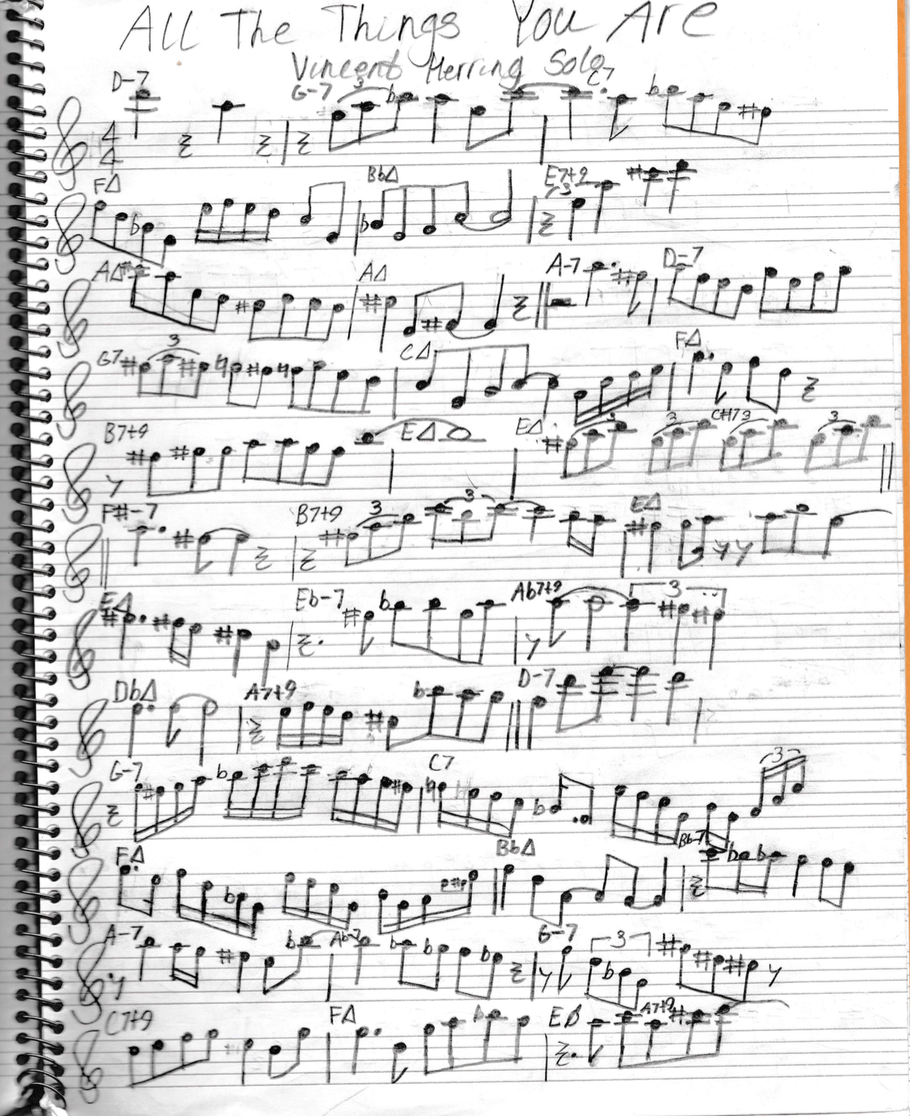 I asked Jack if he could play it with the recording and he gave it a shot.  He did really well and said he would continue to work on it.  Sure enough, two lesson later he had it completed. There were a few measures that he had a bit of trouble with that I took a crack at for the final version but you have to give props to Jack for tackling this monster for his very first transcription in 10th grade.  Wow!!

As far as the benefits of doing this, I think there are a multitude.  Jack improved his ear, he learned some cool new ideas that he immediately starting using in his solos, his phrasing sounded more mature, his sound became more confident and mature,  he started working on imitating some of Vincent Herring’s stylistic nuances (vibrato, bends, falls,etc……..), his intonation improved in the upper register and lastly, he gained confidence from tackling a very hard challenge and finishing it.  I would say that he has made huge strides forward in the 6 weeks leading up to the finished transcription as well as the weeks afterwards.

Now, before you write Jack off as just a supremely talented youth who could do this stuff blindfolded as he was leaving the womb,  I asked Jack how much he practiced everyday expecting him to say “I try to get an hour in a day” like most of my students.  Nope, Jack’s goal is 3-4 hours a day!!  I broke into a big grin when he told me that…….

I’m looking forward to seeing Jack continuing to advance in the years ahead.  He is already light years ahead of where I was in 10th grade that is for sure.  Well done Jack!  Keep up the great work!!  I promise I won’t move any farther away in the next four years.       Mr. Neff

All the Things You Are-Vincent Herring Alto Sax Solo Eb

Mr. Neff,  I want to thank you for sharing your God-given talents through your on-line lessons.  My husband, Michael, is blind, but he is a great sax player and he has been enjoying your lessons for quite some time now.  It’s not unusual for me to hear “Hey, babe, listen to THIS!” – and he will cut loose on his sax, just thrilled at what he learned during his session with you.  His excitement warms my heart!  You have no idea how much you have poured into my husband.  You have opened musical … END_OF_DOCUMENT_TOKEN_TO_BE_REPLACED

I’m an experienced player in the pop/soul/funk areas of music and, previously, classical.  Over the decades I’ve been playing, I’ve always felt that I could do what I needed in those styles of music.  However, recently I began to feel limited by my use of the same old licks. When I discovered Steve Neff’s website, and heard the audio examples based on the exercises in his books, I realized they were what I needed.  I purchased all of them and have been working on them since.  It’s very hard work… END_OF_DOCUMENT_TOKEN_TO_BE_REPLACED

Your material is great! I got your New Altissimo Lesson 6 months ago and I have learned more from that than in all my 44 years of playing! I appreciate your down to earth teaching method and I really appreciate the heart that you teach with. I have been a subscriber to your lessons for the past 6 months and I have learned a great deal. Over that period of time I have had some questions and you have never failed to respond. Thanks! I have already recommended your lessons to a number of players in… END_OF_DOCUMENT_TOKEN_TO_BE_REPLACED

Just a brief note to compliment you on your teaching skills and in particular for the honesty of your lessons.  I am a returning alto sax player in my 50’s and I was looking for a no nonsense, straight to the point kind of guidance. I had intended to email you with a few questions regarding the use of the bis key but then I noticed that there was a lesson on that specific topic and after viewing it,  all my questions were answered. I once took a group lesson with a well known professional sax … END_OF_DOCUMENT_TOKEN_TO_BE_REPLACED