Here’s a transcription that Steve Kortyka did of a Clay Pritchard solo over Cherokee on the video below.  You might not have heard of these guys yet but Steve Kortyka is a great New York player that plays with Lady Gaga among many others and Clay Pritchard was a semi-finalist from the 2013 Monk Competition.

Steve was nice enough to give permission for me to post this transcription here on the site.   I usually don’t post other transcriptions but I downloaded this one a few weeks ago and I was so impressed with Clay’s lines in this solo that I had to ask if I could share it.  There is tons of bebop vocabulary to pick through and some real gems within these lines.  I must of played through this solo about 20 times in a row this morning…… 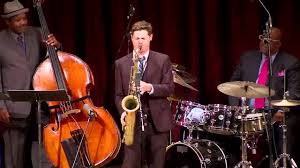 When you watch the video below, it might be hard to wrap you ears around the lines you are hearing because of the fast tempo.  I would encourage you to take a look at the transcription and try playing through it at a slow to medium tempo.  Try to break the lines down into smaller bites of vocabulary that you can learn and use in your own playing.  When you pick out a line or idea to work on, try to figure out how it is constructed in relation to the chord as you play it over and over.  Once you understand how it is constructed then try playing through Cherokee at a moderate tempo while using the new idea every place you can.

As an example, I really like the melodic idea used during the first four bars of the bridge on the second page.  I played it a few times until it was in my ear and I understood the line and then I tried to play it through the entire song on every chord.   You do this a few times and it will start to works it’s way into your vocabulary.

*Tip of the Day-I know with all the great transcriptions on this site it is hard to pick one idea to focus on but you would be much better off to focus on one thing and master it then to play through 20 solos and master nothing today.

Check out the video below and the transcription.     Enjoy!

Thanks again to Clay Pritchard for the great solo and Steve Kortyka for the transcription.  Keep an eye out for these two young players!!

I bought Steve’s dominant bebop book and took a couple of online lesson from him. I really appreciated Steve’s careful listening of what I wanted to get done in a lesson and his clear, concise ideas on next steps to improve my playing and musical interpretation.  His mastering  the Dominant Bebop Scale has lots of exercises to use a scale that addresses the largest percentage of chords I come across in pop/blues music. The dominant V7.  Needless say it has improved my playing.  I teach and a… END_OF_DOCUMENT_TOKEN_TO_BE_REPLACED