In todays modern world, you see new products popping up on the internet almost everyday.  About a month ago, I was on Facebook just browsing through friend’s posts when I came upon some beautiful pictures of some mouthpieces I had never seen before.  These were posted by Liu Shizhao who lives in Beijing, China and apparently makes saxophone mouthpieces.   Judging from the pictures I saw, these were masterfully made mouthpieces that looked beautiful!  Of course, with sax mouthpieces, looks are not everything…….the true test is in how they play.   I contacted Mr. Shizhao and asked if I could review some of his mouthpieces on Neffmusic.com and he graciously agreed. 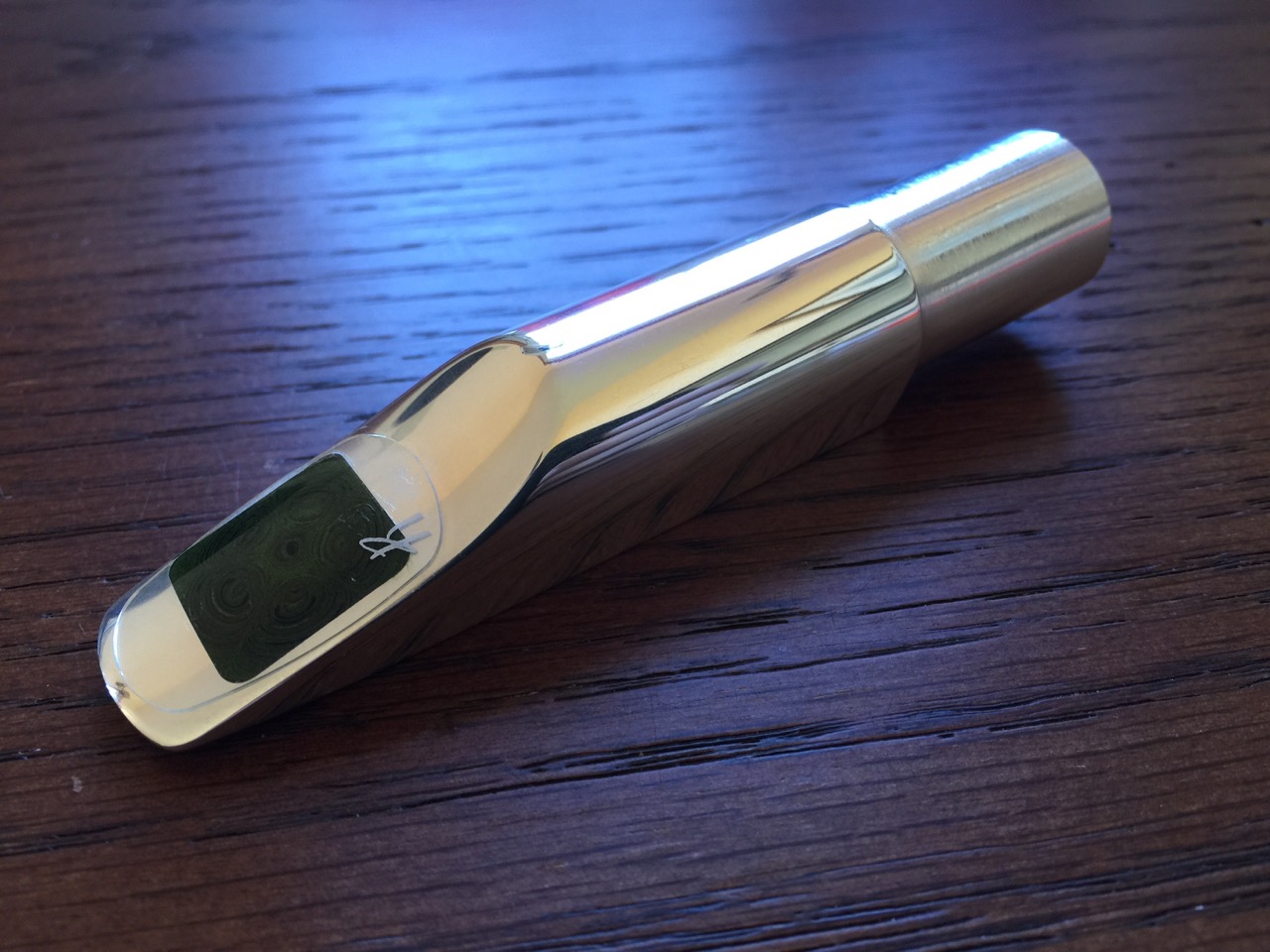 A few weeks later, I received a package in the mail from China.  I was very excited!  These mouthpieces looked beautiful and I was really hoping they played as good as they looked.  I opened up the package and inside were a carefully packed silver tenor mouthpiece and silver alto mouthpiece.  Today I am reviewing the tenor mouthpiece.   Mr. Shizhao calls this mouthpiece his MB prototype mouthpiece which I assumes refers to Michael Breckers Guardala mouthpiece that he played for so many years. 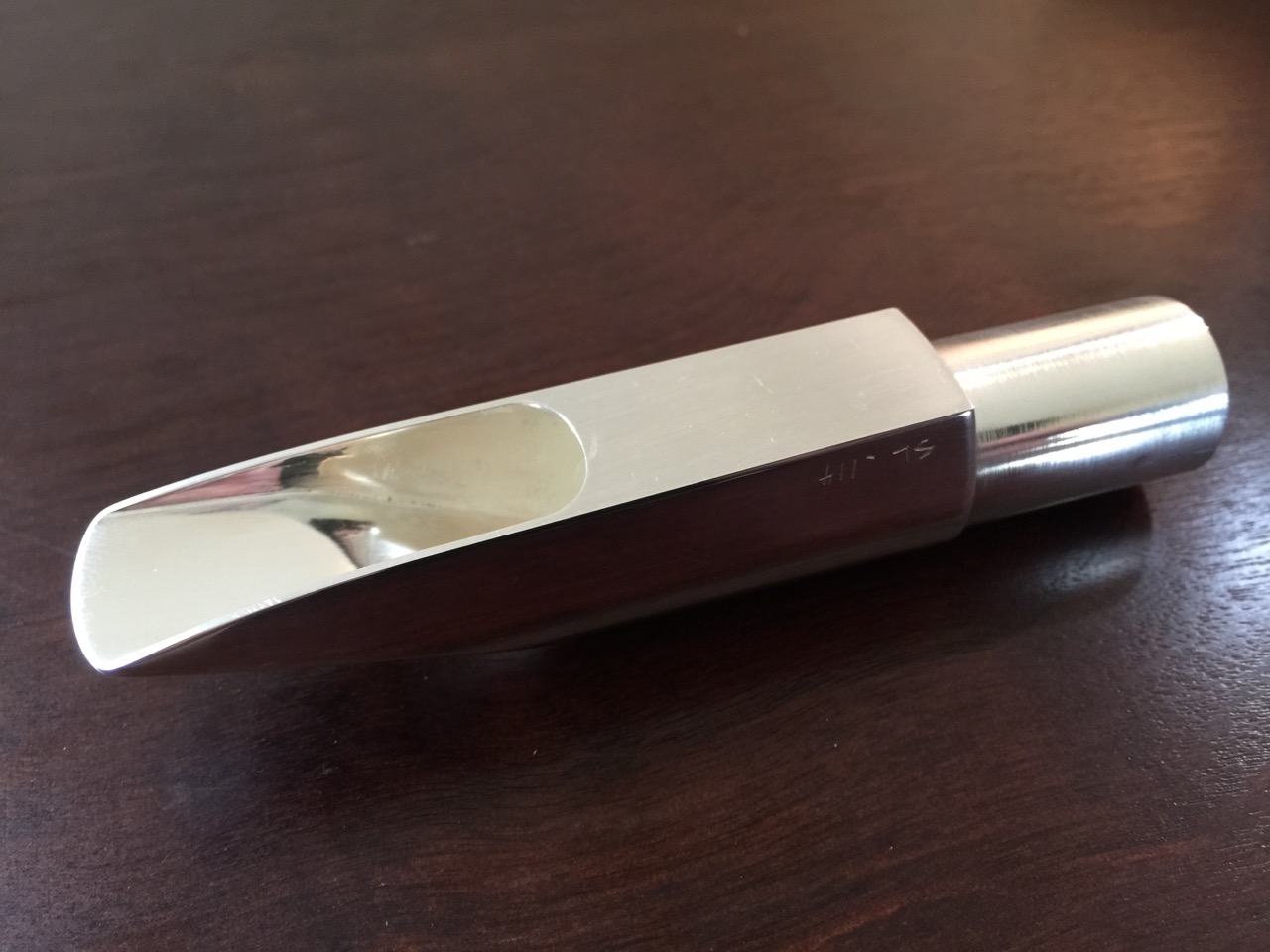 The Shizhao MB model looked great upon inspection. Although you can’t tell from the pictures, it has a beautifully designed dark green bite plate.  The craftmanship looks superb.  The rails are thin and even and the tip rail looks to match the shape of my reeds exactly.  The table looks to be exactly the width of the reed so the edges of the reed are even with the outside of the thin side rails. 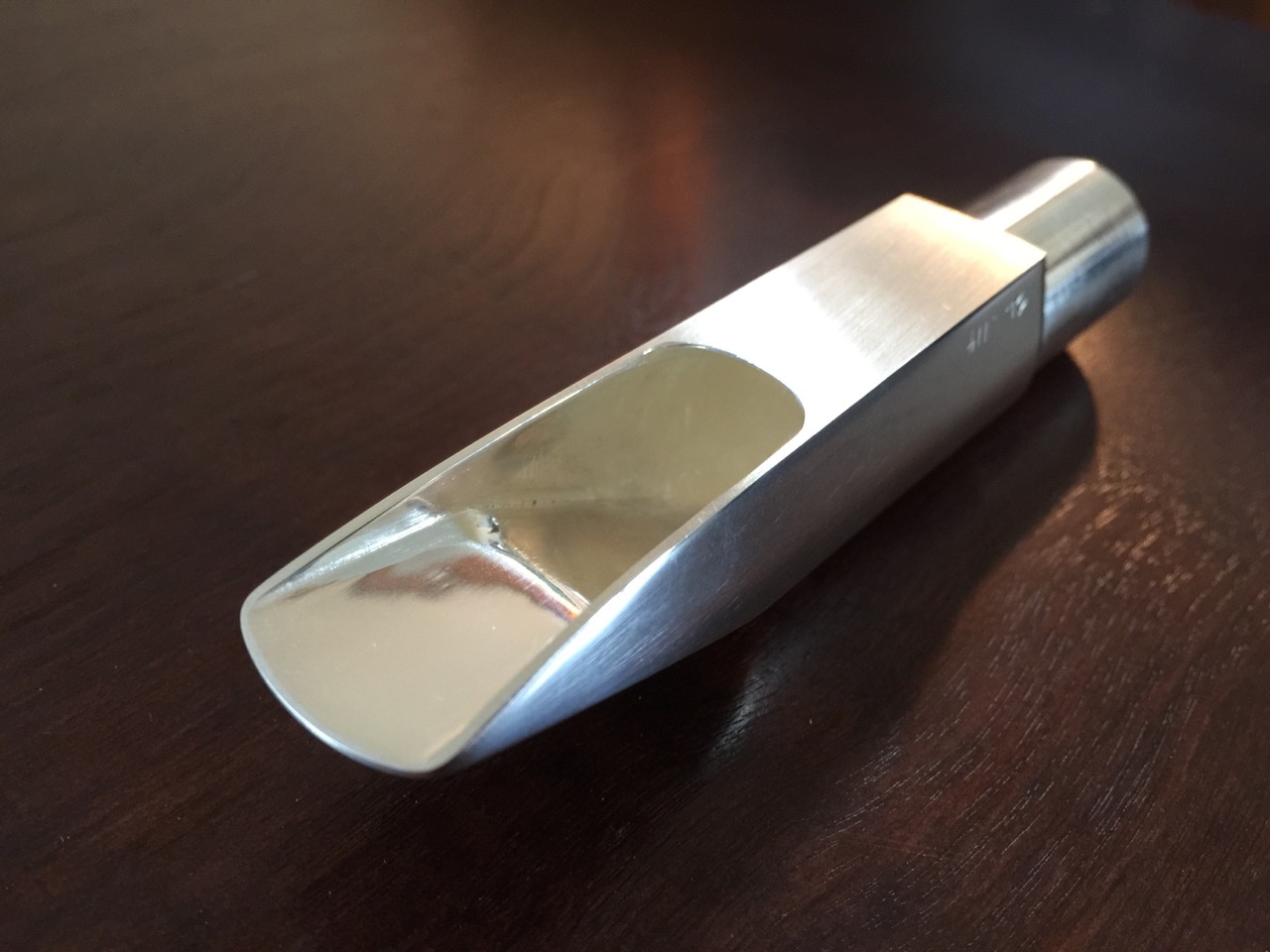 The sidewalls of the Shizhao MB mouthpiece are scooped out and the chamber looks pretty large to my eye.  On the side of the mouthpiece is engraved .114 which is the tip size.  I generally don’t like going over .110 tip openings but when a mouthpiece has a baffle of this length and height a tip of around .115 can still feel pretty comfortable for me.

I found Rigotti Gold reeds to be a bit too edgy for me on this mouthpiece but the Rico Select Jazz reeds worked perfectly with a 3S unfiled size.  I found that the RSJ reeds gave a bit more body and thickness to the tone and took away some of the edge that I got with the Rigotti reeds.  I tried a Rovner ligature on this piece also but I didn’t like it as much as a metal ligature.  The Rovner coupled with the Rico reeds just took too much of the highs out of the sound for my tastes but others might like the Rovner for a darker vibe. 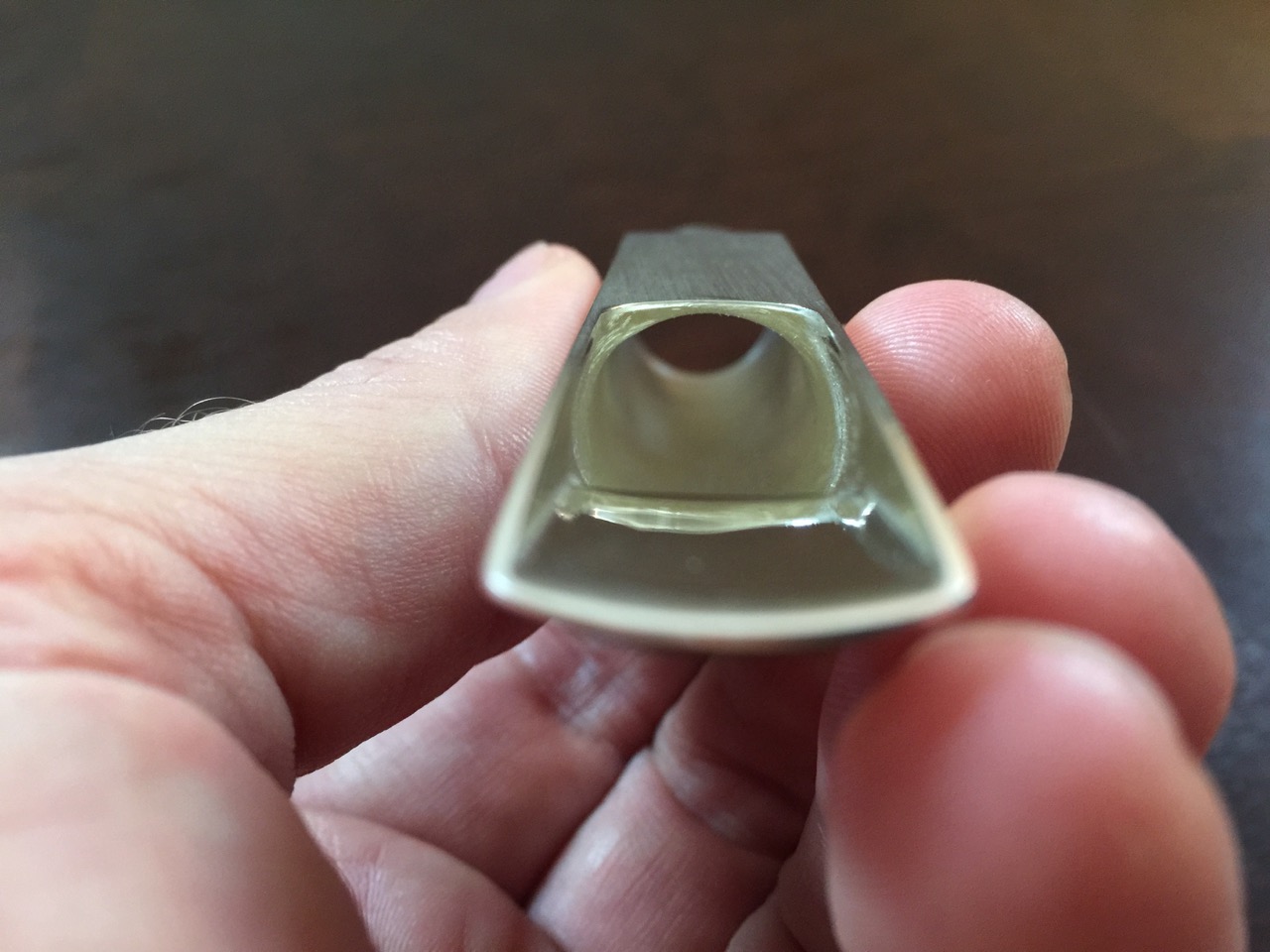 The Shizhao MB prototype played great for me. I’ve played a number of handmade Guardala mouthpieces as well as laser trimmed Guardalas and in my opinion this mouthpiece is in the same category as those. Liu actually emailed me and told me that he based this mouthpiece design off of a handmade Guardala that he owns. He did say that he changed the end of the baffle on the tenor piece as well as making the rails shape slightly different.  If I compare this piece to those Guardalas I have played I would say this piece is less edgy and fatter sounding than those mouthpieces although in my opinion, it still has that awesome core to the sound that players of these kind of mouthpieces love.  I always had a hard time playing standards on Guardalas but I taught for a few days with this piece on my tenor and had no problem laying back and playing a few jazz tunes on it.  You have to be careful not to blow full volume as the volume and brightness multiply exponentially.  Play laid back and it sounds great for jazz though.

To me the sound is full and fat with a ton of power available. Like most high baffle mouthpieces, the tone can get really bright and edgy if you don’t adjust your embouchure to balance that.  I found that making my lower lip fatter and more pillowy really helped fatten up the tone and take some of the edge away.  I’ve also found that the way I blow and focus my air has to be different than playing on a Link style mouthpiece. It usually takes me some time to readjust to a high baffle piece but once I do they can play and sound great!

I have  heard the complaint about laser trimmed Guardalas that they can sound too thin up in the palm keys.  I had the same experience with one years ago. I think Mr. Shizhao has taken some of the edge and thinness away from those high notes on his piece as I didn’t notice that at all while playing it. I wonder if the smooth rollover at the end of the baffle helps in that regard…………

The intonation on this mouthpiece was terrific in my opinion and the piece played really smooth and evenly throughout the range of the horn also. 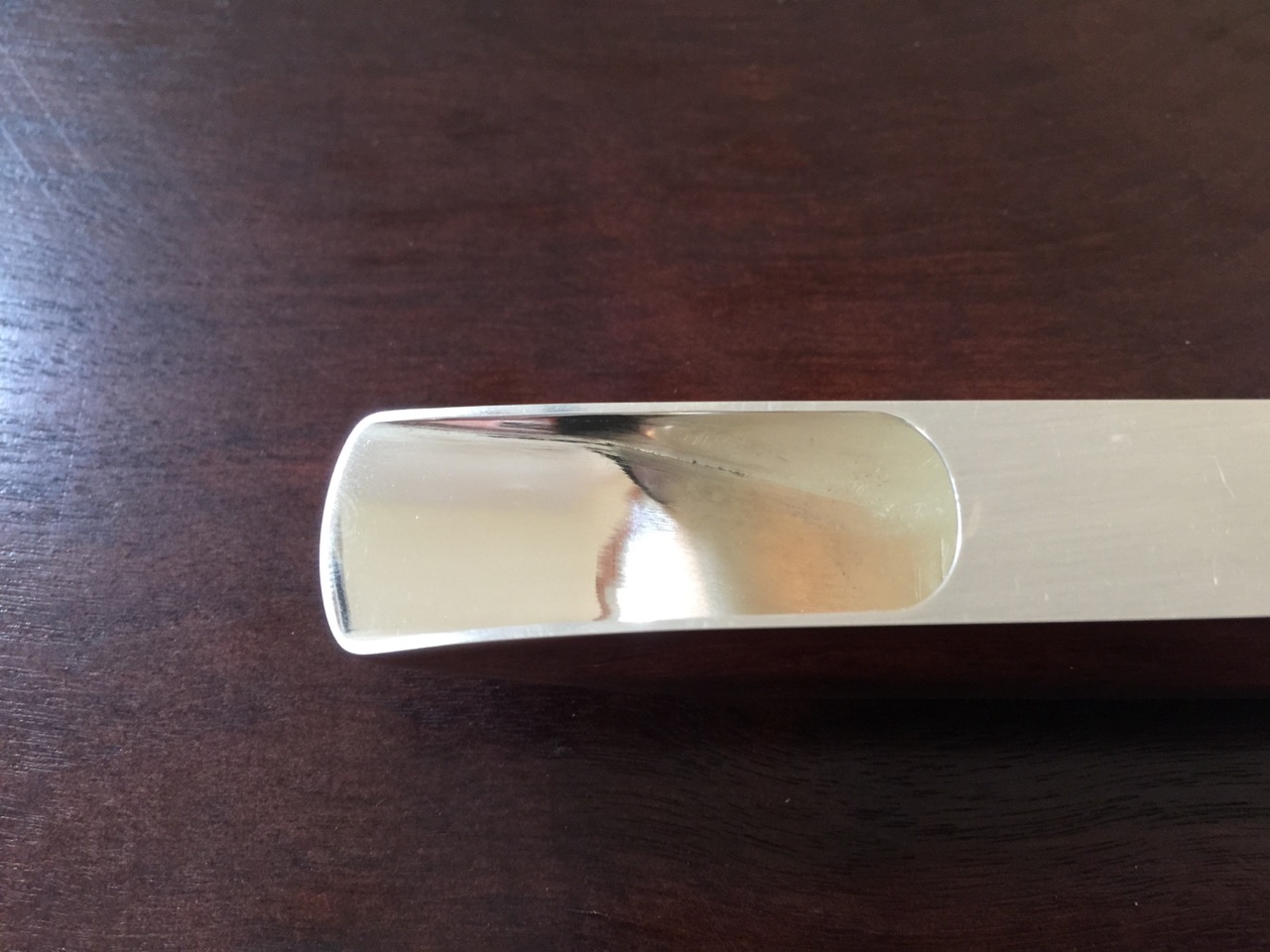 For many years, China has had a bad reputation for producing inferior products related to the saxophone but I’m seeing more and more saxophone related gear from China that is quite good!  The Shizhao MB prototype is right up there with some of the best high baffle tenor mouthpieces I have played. I am told that these tenor mouthpieces sell for 495.00 USD which I think is a great deal.  To order one you can contact Liu Shizhao by email at saxproshop@gmail.com.  If this tenor mouthpiece is the first  of many mouthpiece to be made by Mr. Shizhao I am excited to see what other mouthpieces he produces in the future!  Great Job!

I like so many other subscribers feel so encouraged by Steve’s learning techniques; you will enjoy reading the comments of praise others have left as you too will feel that you share a common view and path. I feel very lucky to have come across Neffmusic and that feeling will remain with you as you search through a treasure trove of learning materials on offer, you will quickly find the lessons that you are suited to. You will instantly recognize the unparalleled quality of Steve’s teaching … END_OF_DOCUMENT_TOKEN_TO_BE_REPLACED