Here’s another beautiful solo by the great tenor saxophone player, Joel Frahm.  Joel has commented on neffmusic.com quite a few times over the years and his passion for everything to do with the saxophone is very obvious.

This youtube video is one of my all time favorites.  It is the tune “Aguas De Março” (Waters of March)by Antônio Carlos Jobim and is performed by the Sant Andreu Jazz Band with guest soloist Joel Frahm.

Before I write about this amazing solo, let me just say that this recording and the Sant Andreau Jazz Band completely blew me away the first time I heard it.  The truth is that I have probably listened to this clip well over a hundred times by this point.  It is saved on my computer and whenever I feel bummed out or down for whatever reason,  I play it and by the end my sprits are lifted and I can get on with my day.  This morning was such a day.  I have been sick the last few days and when I woke up this morning I felt awful and just wanted to stay in bed.

Nevertheless, I fought my feelings, got a huge cup of coffee, trudged my way to my office and put on this youtube clip as I sipped my coffee.  By the end,  I felt much more hopeful, positive and determined.  With my new positive frame of mind, I decided to transcribe Joel Frahm’s beautiful solo on this tune.

Joel does an incredibly sensitive and beautiful job with this solo.  His tone and phrasing remind me a lot of Stan Getz.  I love how melodic and perfect it is.  If you are a fan of Joel Frahm, you know he could have torn this solo apart with 32nd notes, chord substitutions and “sheets of sound”.  Instead, he chose to be lyrical, musical and in the moment.   A young student might listen to this and think there is nothing impressive in this solo, but they would be wrong in my opinion.  What Joel is achieving here is one of the hardest endeavors to achieve in music.  A solo that is musical, sensitive and moves the listener in it’s beauty.  In my opinion, he has achieved that.

I believe the entire Sant Andreu Jazz Band and Joel have achieved that in fact.  I believe that because I have listened to this clip well over a hundred times and will probably listen to it another thousand times over the coarse of my lifetime.  It has lost none of it’s original beauty for me, I don’t think it ever will……. 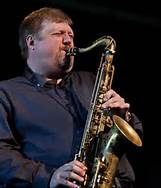 If you like Joel Frahm’s playing on this recording, make sure you check out Joel’s recordings!  I have most of them and they are terrific!  Also do yourself a favor and follow the Sant Andreau Jazz Band on Youtube!  I can’t believe how great they sound and how young they look.  I certainly don’t remember sounding that good in high school……….Wow!

Thanks again to the Sant Andreau Jazz Band and Joel Frahm for such a great performance! Also,  special thanks to Alba Armengou and Rita Payes who did such an amazing job singing this tune with such contagious joy!  Also, thanks to the director Joan Chamorro who must be the inspiration and direction behind this fabulous group.

Thank you so much for the great job you are doing to help further our jazz studies. Though I make my living as a repairer of musical instruments I am a student of jazz and have been fortunate enough to be involved with a big band and a combo for the last several years. As my children began to leave “the nest” I had decided to dedicate the next half of my life to a more serious study of the sax but I didn’t know exactly how I would go about doing this until a friend of mine turned me onto your si… END_OF_DOCUMENT_TOKEN_TO_BE_REPLACED

I want to say something about Steve Neff’s series of lessons, Beginner Jazz Improvisation. For a couple of years I tried many beginner lessons and my problem was that there was a gap between lessons that were fairly simple and ones that I was not quite ready for and my progress stalled out. That problem was solved with the series Beginner Jazz Improvisation. He guides you step by step along the way and builds a foundation for learning jazz and blues. He leaves no question about what to practice … END_OF_DOCUMENT_TOKEN_TO_BE_REPLACED