Today, I am reviewing a Matt Marantz Slant Legacy hard rubber tenor saxophone mouthpiece.  I have wanted to try one of these ever since I heard Joel Frahm play one on Youtube last year.  Matt Marantz was nice enough to send me one to try out for a few days and perhaps review, so here it is.

The Marantz Slant Legacy is advertized on Matt’s site as:

The Slant Legacy hard rubber mouthpiece is a recreation of the ever sought-after hard rubber mouthpiece of the 1960’s, the Slant Sig Link. Using the most up to date modern technologies and the absolute highest quality European rod rubber that can be bought in the world today. Matt Marantz spends up to 6 hours fine tuning the facings and hand finishing all the playing surfaces to create a tool for saxophonists that not only plays to the highest standards, but looks great too. Currently available in black hard rubber. Made in New York, NY. 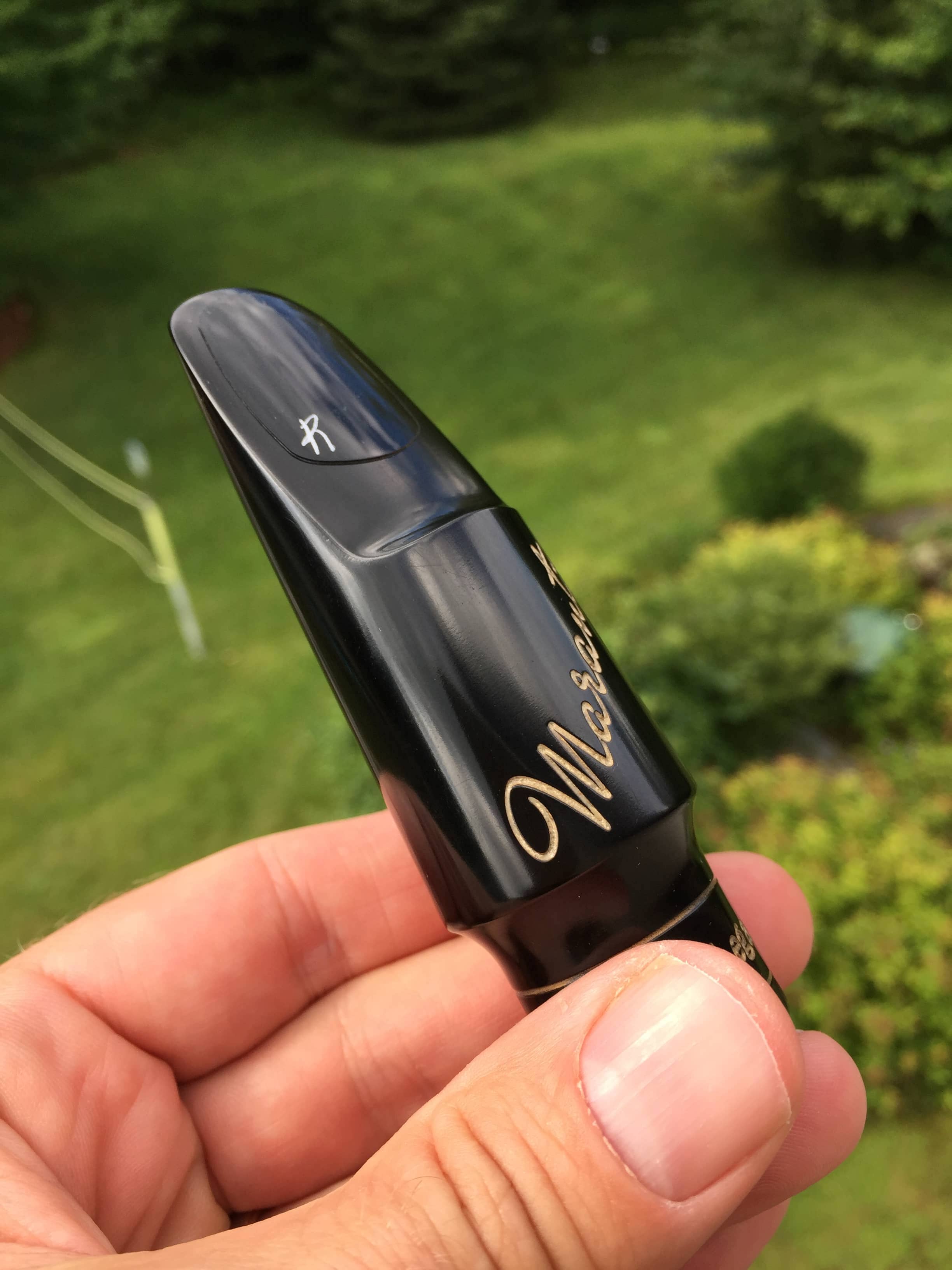 I knew I would only have a few days with this saxophone mouthpiece so as soon as I received it I opened up the package and started playing.  The mouthpiece that Matt sent me is his personal Slant Legacy that he has been playing for the last few months.  I was a bit nervous about playing his personal sax mouthpiece so I tried to be extra careful with it. (When taking the photos I found myself getting nervous that I would accidentally drop the mouthpiece off the deck……luckily I didn’t.)

The Marantz Slant Legacy tenor sax mouthpiece looked clean and beautiful. The table, rails, tip and baffle all looked perfect. Everything looked even and precise to the eye. The mouthpiece was a 7* tip opening which is a .105 tip opening.  I usually find Rigotti Gold 3L reeds to play easily out of the box on a 7* tip opening but the 3 Rigotti 3L’s I tried all felt a bit too soft for me. The Slant Legacy felt very free blowing and I decided to try a harder reed so I went with a Wood Stone 3 1/2 reed that I have.  The Wood Stone 3 1/2 reed played great on the Slant Legacy as did some harder Rigotti reeds I tried.  I decided to record a clip with the Wood Stone reed. 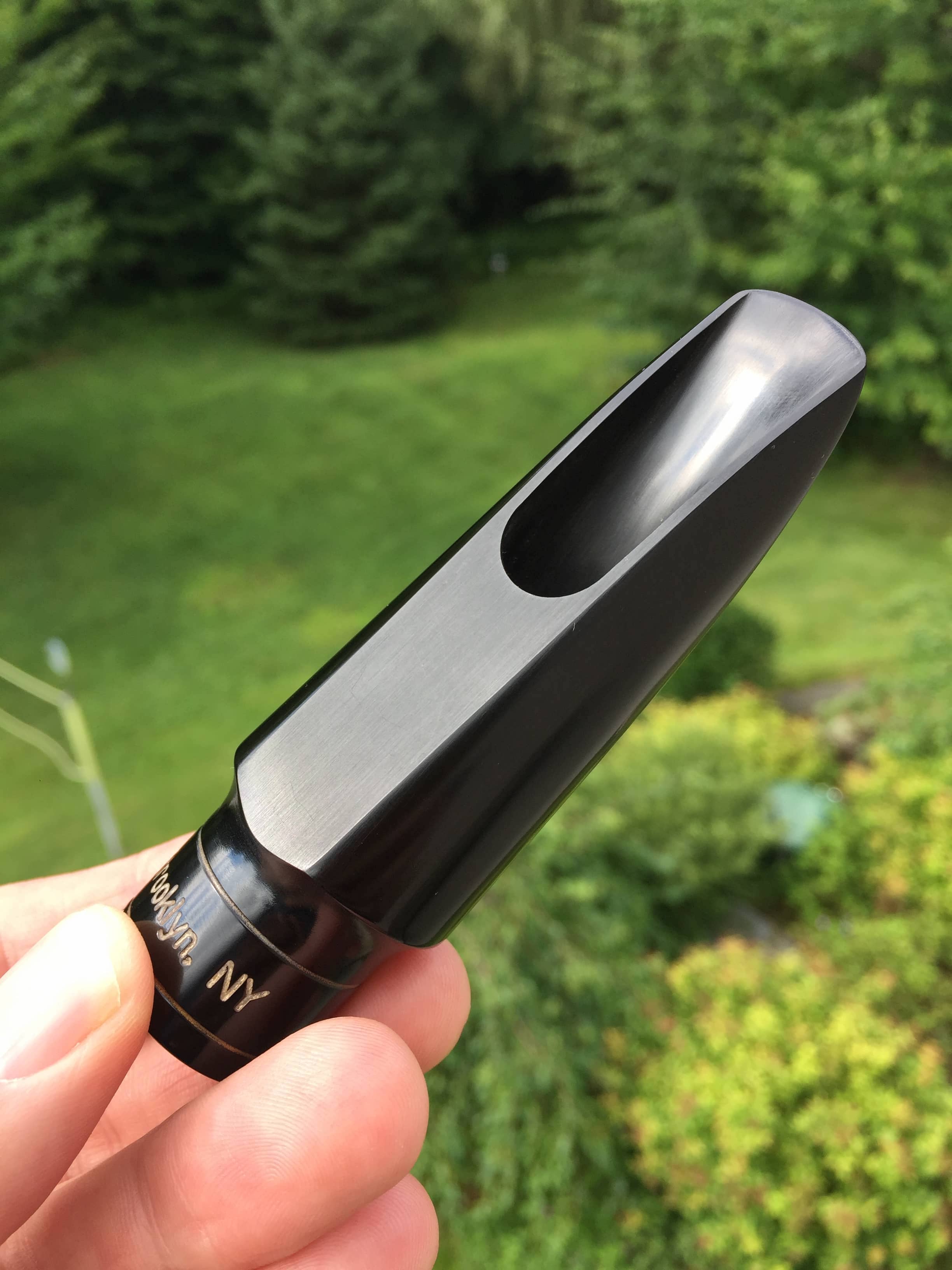 The Slant Legacy saxophone mouthpiece has a nice rollover baffle in it which then slopes down into the large chamber. The sidewalls are scooped out and the transition from the baffle to the chamber is smooth and even.  The tip of the mouthpiece matched the tip of my Rigotti and Wood Stone reeds perfectly.

The mouthpiece really does look beautiful as you look at it.  As I look at the mouthpiece it just looks like it was crafted by an artist that really loves what he is doing.  You can see it in the perfection and attention to detail. 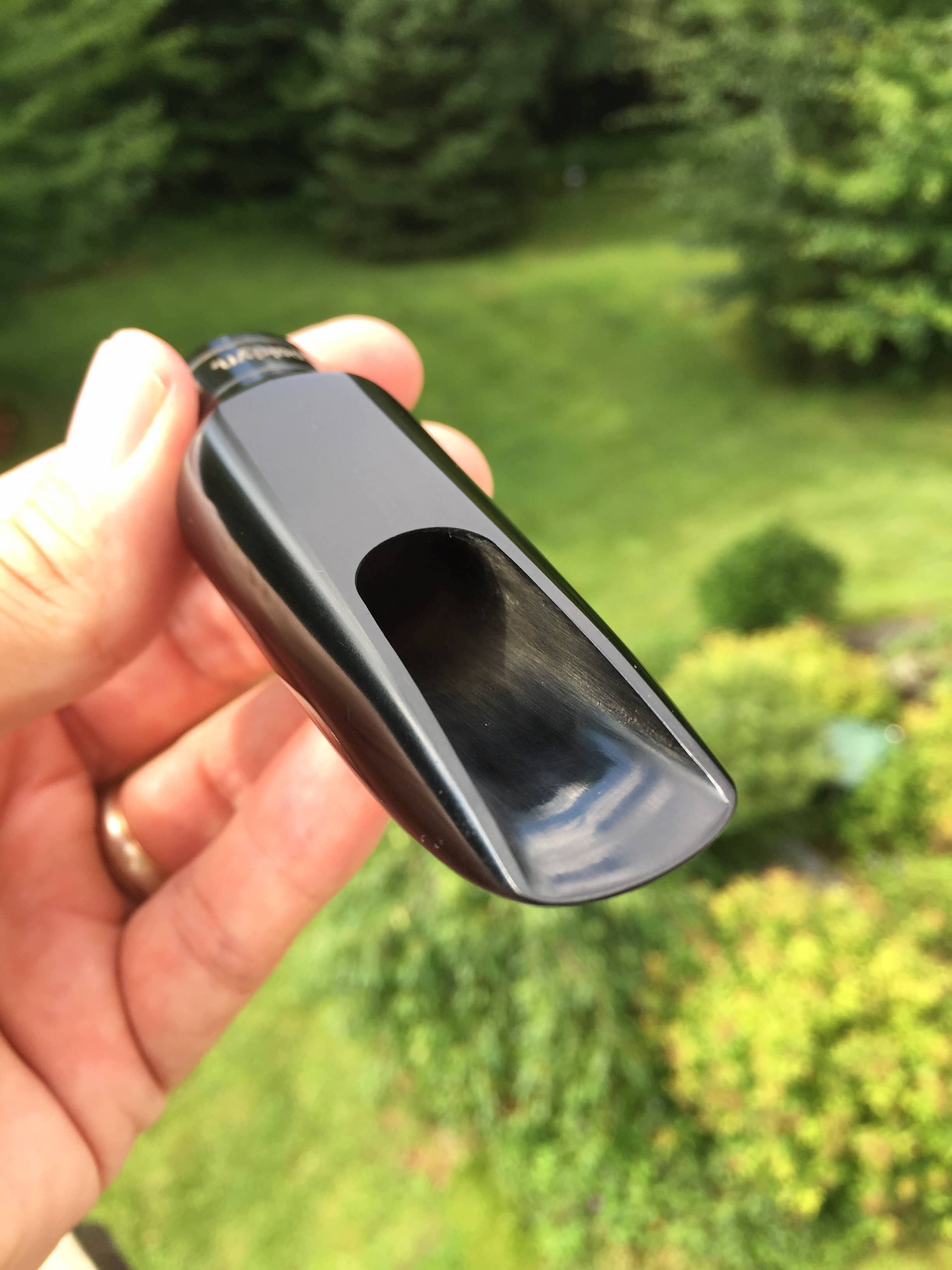 I played the Marantz Slant Legacy mouthpiece alongside my Early Babbitt Otto Link 7* that I have been told was made from the Slant Sig mold and the two mouthpieces played quite similarly.  Both had a big full tone that filled the room with rich overtones. The Slant Legacy was a bit more free blowing than the Link and I emailed Matt asking about that.  He said that he preferred a more free blowing curve on his personal mouthpieces but could adjust the curve to add more resistance if a player requested that also.

The Slant Legacy tenor mouthpiece has a thick rich tone with lots of character in the sound.  It played smooth and evenly throughout the range of the sax and the intonation was very good. 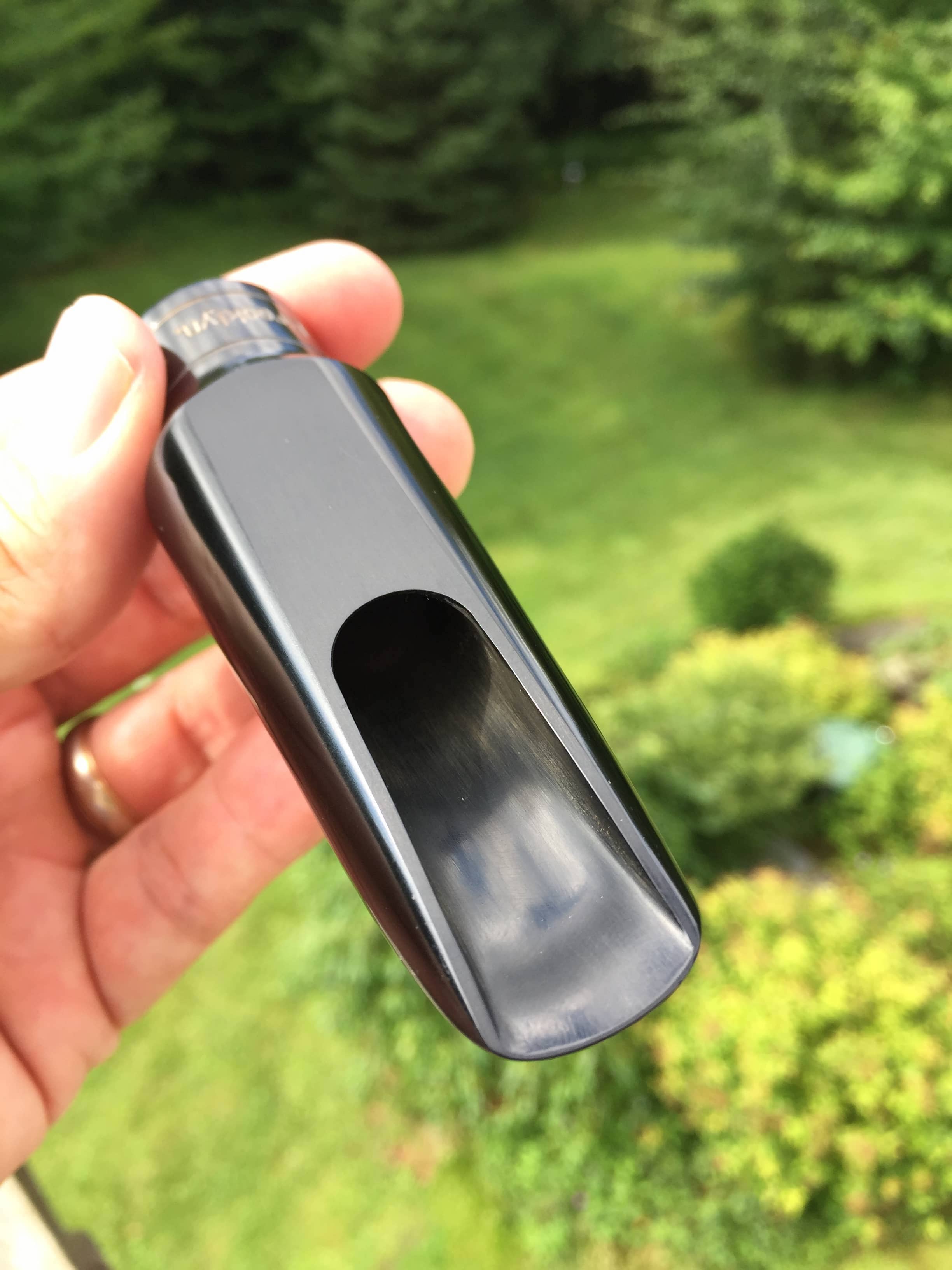 That altissimo on the Slant Legacy popped out nicely as you can hear on the clip. You can push the mouthpiece to play brighter also which is nice if you play different genres of music and need to go in that direction. The fast runs are smooth and flowing which is a sign to me that the mouthpiece plays evenly throughout the range of the horn.

The Marantz Slant Legacy is another great alternative to all of you out there that want a Slant Sig Otto Link but can’t afford that 1,000+ price tag that comes with a vintage mouthpiece. Even better, is that the Slant Legacy is worked on by hand by Matt as he works to craft the perfect mouthpiece for you.

If you dig the sound clip below and Joel Frahm’s youtube clip above you can contact Matt Marantz through his site at Marantz Custom Mouthpieces to try one for yourself.   Great job Matt!   Thanks for letting me review this great mouthpiece.

Disclosure: I did not receive any compensation or products at the time this review was written. I borrowed this mouthpiece from Matt who was kind enough to let me try it for a few days. After the review was finished, Matt offered to do a free refacing for me.  I took him up on his offer and sent him a hard rubber mouthpiece I had sitting in a drawer. Regardless, I only review mouthpieces and other saxophone related products that I enjoy and believe will be a good choice for other saxophone players to try also.    Steve Neff

It is so refreshing to have a great player, who can provide lessons and examples in a manner which is understandable to most any enthusiastic saxophonist who is ready to improve. not just the, do this, do that, memorize this, memorize that… while all that is absolutely necessary, you go on to give reasons and examples to explain and validate why you have to do all of these things, the benefits, if you will… that is the key for me, you tell, explain, demonstrate, explain some more, you give perso… END_OF_DOCUMENT_TOKEN_TO_BE_REPLACED

I bought Steve’s dominant bebop book and took a couple of online lesson from him. I really appreciated Steve’s careful listening of what I wanted to get done in a lesson and his clear, concise ideas on next steps to improve my playing and musical interpretation.  His mastering  the Dominant Bebop Scale has lots of exercises to use a scale that addresses the largest percentage of chords I come across in pop/blues music. The dominant V7.  Needless say it has improved my playing.  I teach and a… END_OF_DOCUMENT_TOKEN_TO_BE_REPLACED

Steve’s monthly lessons are entirely valuable. Without brow beating, he tells you all the stuff you deep down know you really should be working on, instead of just relying on the same old patterns. In spite of the fact that you’re taking a video lesson, Steve’s presentation is comfortable and “real”. In a little more than a year, he’s developed a library of lessons that seem to offer any player a lifetime’s worth of practice material. I’m just glad I stumbled upon it.… END_OF_DOCUMENT_TOKEN_TO_BE_REPLACED

Just a brief note to compliment you on your teaching skills and in particular for the honesty of your lessons.  I am a returning alto sax player in my 50’s and I was looking for a no nonsense, straight to the point kind of guidance. I had intended to email you with a few questions regarding the use of the bis key but then I noticed that there was a lesson on that specific topic and after viewing it,  all my questions were answered. I once took a group lesson with a well known professional sax … END_OF_DOCUMENT_TOKEN_TO_BE_REPLACED

I’ve been having ‘ online’  lessons with Steve for a few months now. Being a teacher myself I had had some reservations with the idea at first and the practicalities of it .  Let me just say that my playing has taken a huge leaps forward while studying with Steve and continues to do so.Steve studied with some renowned player/teachers such as Bergonzi and Garzone– this in itself is invaluable but Steve teaches from his own books, which cover a a vast amount of  jazz language. Steve h… END_OF_DOCUMENT_TOKEN_TO_BE_REPLACED