Phil emailed me a few months ago and said he was working on a new mouthpiece for players that couldn’t afford to pay three hundred plus dollars on a mouthpiece. If you have been to my site before and researched some of the mouthpieces I have reviewed,  you might have noticed that finding a mouthpiece under three hundred dollars is getting harder and harder to find these days.  Especially when you are looking for something that is custom made,  faced to exact measurements by hand and play tested before it leaves the shop. 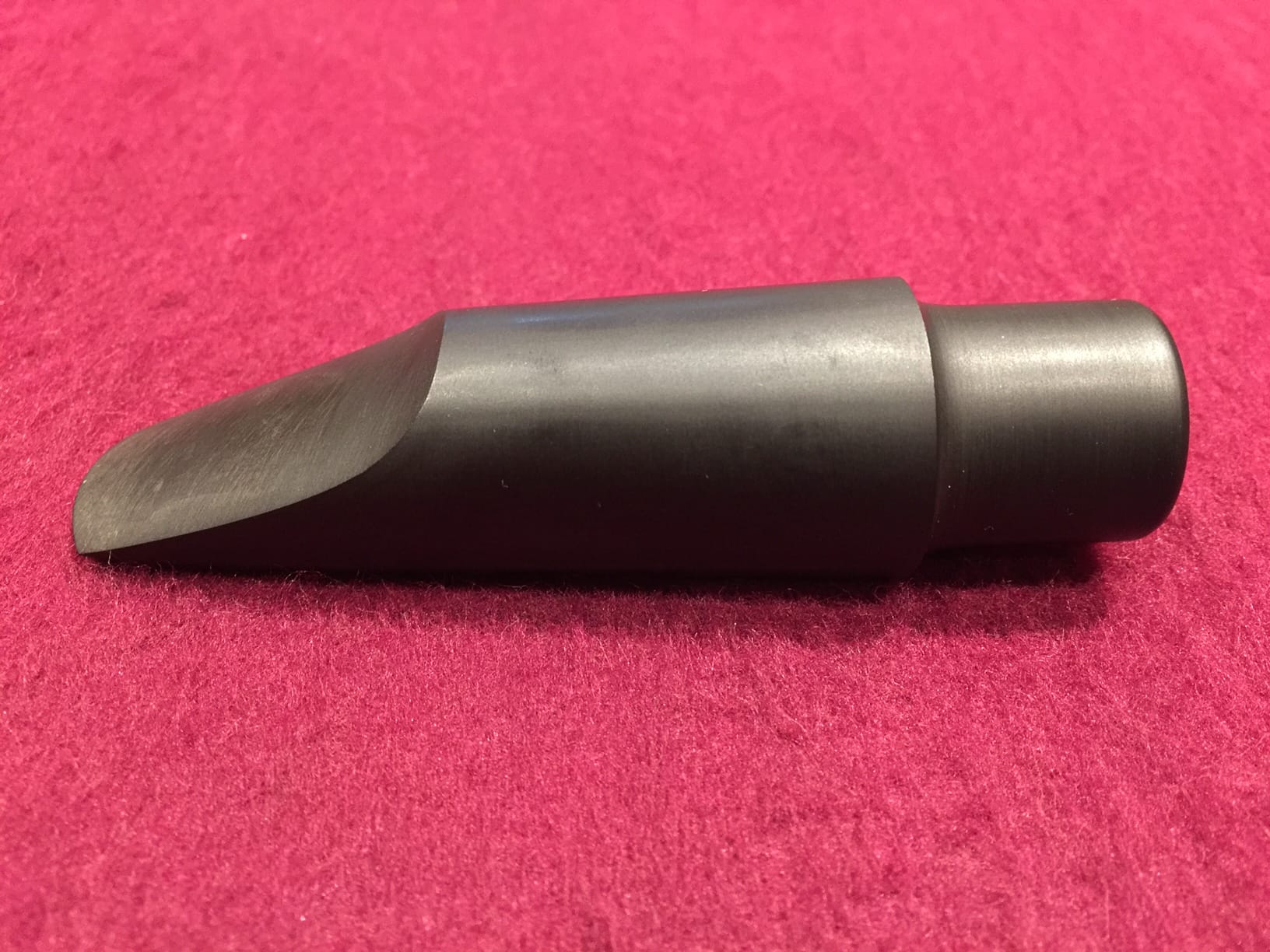 As a teacher, it can be really difficult to  suggest a mouthpiece for a budding high school sax player.  I can’t tell you the number of times a student wants a new mouthpiece and asks “What are you playing Mr. Neff?”  “Well Johnny,  this mouthpiece is very good but it is 300-800 dollars and if I tell your parents to get it they will have a heart attack.”  Usually, I talk about getting an Otto Link, Meyer or hard rubber Vandoren V16 mouthpiece but always with the ominous stipulation of  “You have to try a few out and make sure you get one that is good?”  Today, with fewer and fewer local music stores that can be next to impossible for many students.   It’s kind of a pain to deal with if you really want the best for your students.  Because of all this, when Phil told me about this project of his, I was very curious to try and wanted to try these out and perhaps review them.  Phil was nice enough to send me a free sample of the JZ tenor mouthpiece and the JZ alto mouthpiece to review for all of you. 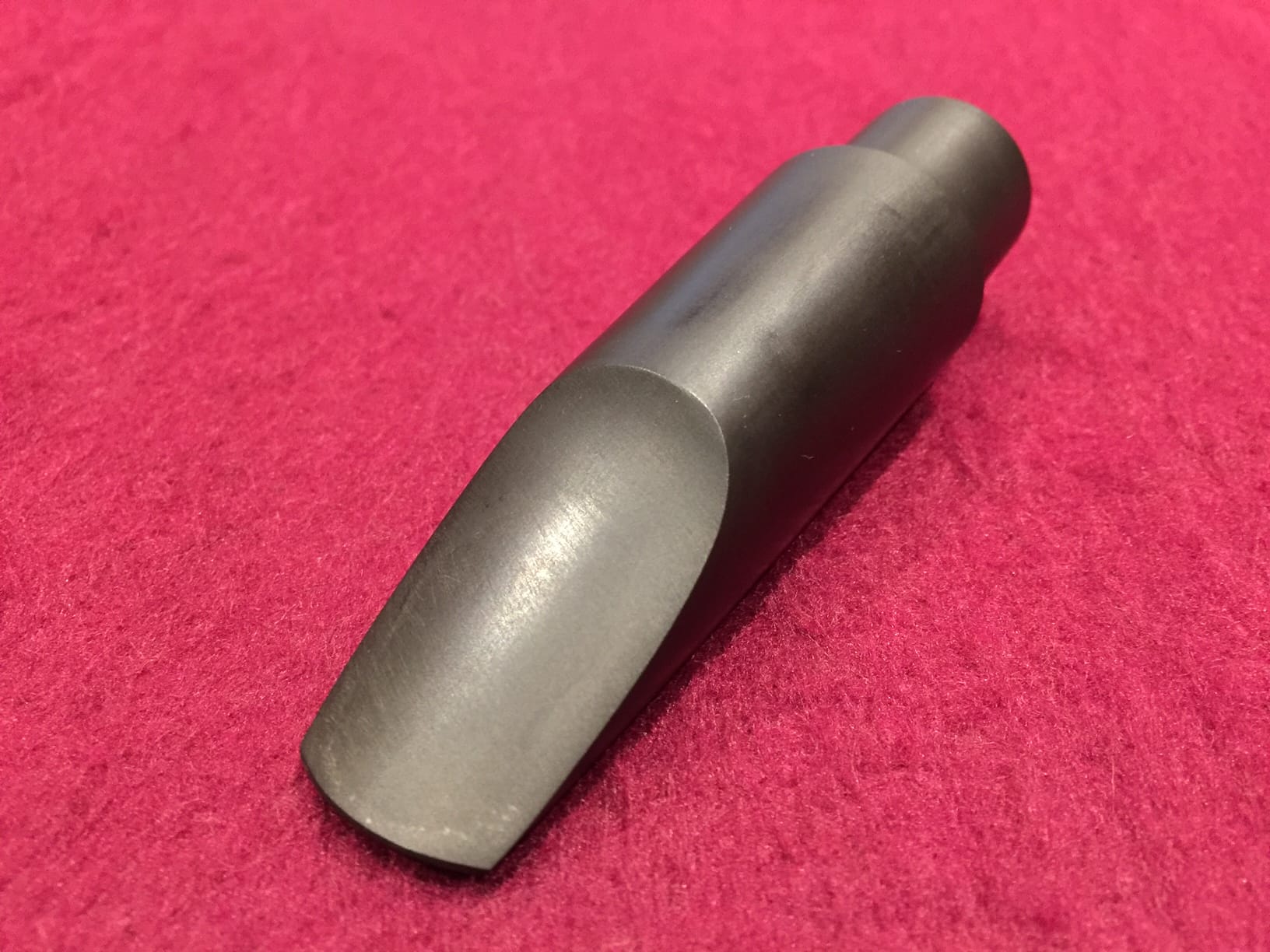 When I received the package from Phil and opened it up, my first thought was that the mouthpiece looked pretty “bare bones”.  Nothing special to entice the eye. No 14 karat gold engraving, no sparkling jewels or bite plate made from a Javan Rhinoceros horn.  None of that.  Not even any engraving or other identification to be had except for a lightly written “Phil-tone” on the lower side of the body. Just a bare bones hard rubber tenor mouthpiece.

As has become my custom,  the first thing I do after looking at a hard rubber mouthpiece is…………I smell it! (Don’t judge…….)  Don’t know why I do this but I have grown to really love that hard rubber smell.  My nose is so good that I can actually smell if a mouthpiece will be good or not……….(ok, I’m joking about that part…….)  The JZ Series tenor sax mouthpiece had that authentic hard rubber scent to it in case you’re wondering. 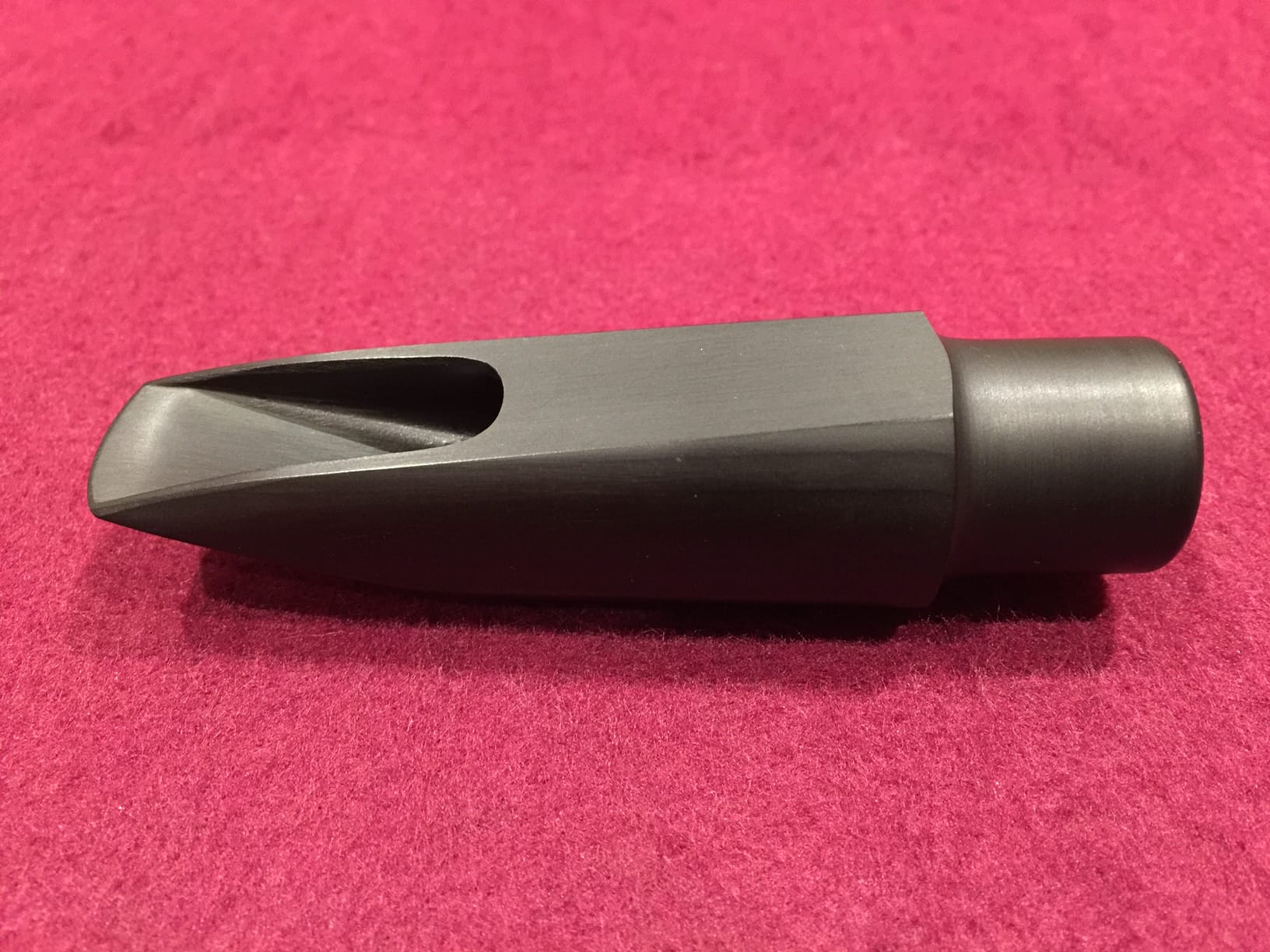 The JZ model sax mouthpiece looks to have great rails, table, tip and baffle.  Nothing out of the ordinary or out of whack.  The tip rail matches my Rigotti Gold reeds pretty closely.  It has a short rollover baffle that quickly rolls over and shoots straight down into the chamber.  The straight fall goes all the way to the back of the chamber area as opposed to ending at the beginning of the chamber.  The side rails are scooped out slightly.  The chamber looks very similar to a typical hard rubber Otto Link size chamber to my eyes.  The hard rubber is polished to a satin sheen and is very smooth to the touch.  (Be careful you don’t drop it!) 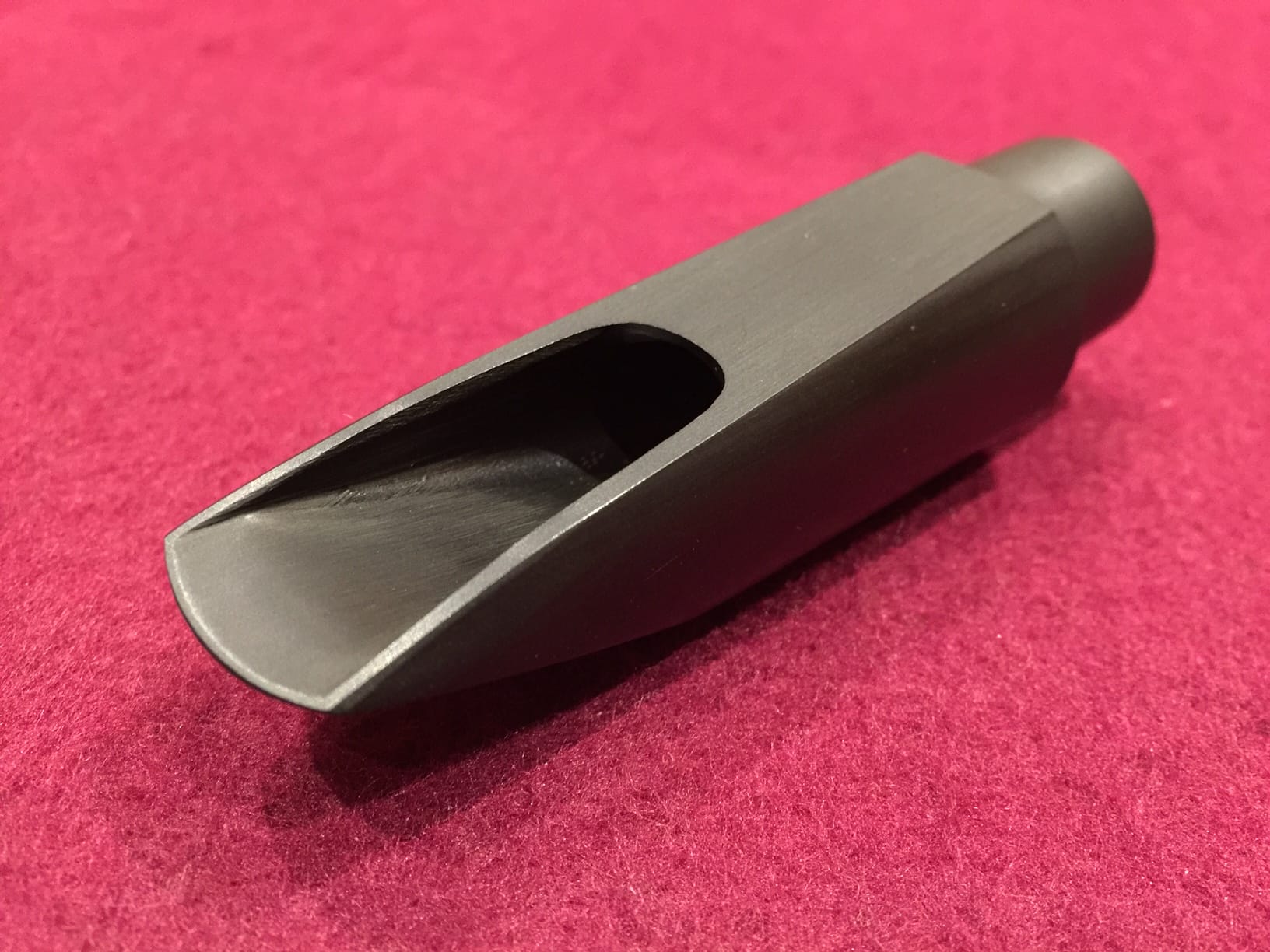 I have to admit that I didn’t have high expectations for the Phil-tone JZ model.  Don’t get me wrong, Phil does great work and I have tried enough of his pieces to know,  but when someone comes out with a cheaper model I automatically think “This won’t be as good as the expensive model…..”.   Maybe it’s human nature, I don’t think I’m the only one who thinks this right? That was my preconceived idea before even blowing a note. (I know Phil is getting nervous reading this at this point……..)

However, I have to say that I was very surprised by the Phil-tone JZ tenor mouthpiece.  I played it with a 3 medium Rigotti Gold reed the other day and recorded a clip with it.  Full thick tone with lot’s to love in the low end.  There is a nice rich character to the tone that I really loved.  I was ready to call it a day and post this review but then this morning I decided to try a 3 1/2 light Rigotti Gold on it also.  The 3 medium Rigotti played very well and it didn’t feel too soft but it didn’t really require too much effort to dial it up.  I thought the 3 1/2 would be interesting to try and I’m glad I did………

I loved the 3 1/2 reed even more.  It’s a different sound that is for sure.  Sounds even richer and has more character to my ears.  Much more power when you push it that is for sure.  I played it for a few Skype lessons today, recorded another sound clip and then about 2-3 hours afterwards.  The sign that I really like a mouthpiece is when I keep playing it long after I’ve recorded the sound clip.  I was just playing, having fun and enjoying the sound! 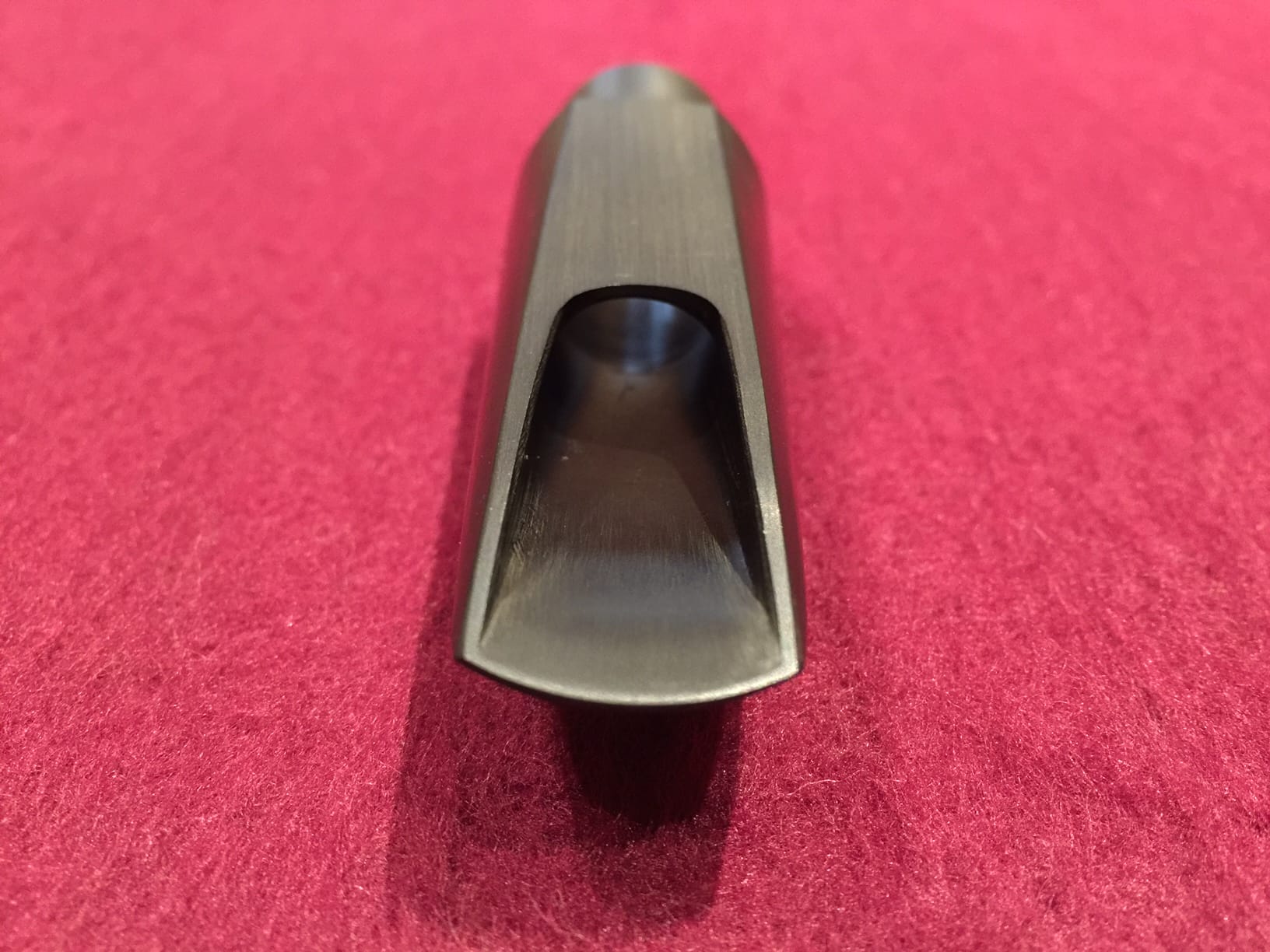 I purposefully played the melody of Body and Soul on the start of both clips just to compare the sound of the JZ  with both strength saxophone reeds.  I also make an effort to go up into the altissimo on both clips as well as play a few overtones on one clip which I don’t think I have ever done before.  I’d be curious of your impression if you care to comment below.  I didn’t add a clip with reverb just because I didn’t think it needed it but certainly could if you would like to hear it.  Let me know if that is the case.

The Phil-Tone JZ Series tenor saxophone mouthpiece was a complete joy to play and I’m glad I have had a chance  review it.  If you like the sound of the clip below and the mouthpiece catches your interest then give it a try.  Right now, Phil is selling this mouthpiece for 199.00.

Now, before you start complaining about that price, remember that many of the mass produced mouthpieces out there are selling in the 120-180 dollar range.  For a few dollars more, you are getting a piece that is handmade to exact measurements and play tested.  It doesn’t come off a conveyor belt and put in a box for you to play test it after you buy it.   If you are into a shiny gold mouthpiece then this isn’t the mouthpiece for you, but if you don’t care about that and you want a more affordable mouthpiece that plays great, the JZ tenor mouthpiece is a great option to consider.

You can contact Phil on his website at www.phil-tone.com.  I don’t see the JZ model on his website yet but if you send him an email I’m sure he can hook you up with one.  Tell him Steve sent you………….Great work Phil!!   I’m waiting for the Beyonce Series to be released………….

Your material is great! I got your New Altissimo Lesson 6 months ago and I have learned more from that than in all my 44 years of playing! I appreciate your down to earth teaching method and I really appreciate the heart that you teach with. I have been a subscriber to your lessons for the past 6 months and I have learned a great deal. Over that period of time I have had some questions and you have never failed to respond. Thanks! I have already recommended your lessons to a number of players in… END_OF_DOCUMENT_TOKEN_TO_BE_REPLACED

I like so many other subscribers feel so encouraged by Steve’s learning techniques; you will enjoy reading the comments of praise others have left as you too will feel that you share a common view and path. I feel very lucky to have come across Neffmusic and that feeling will remain with you as you search through a treasure trove of learning materials on offer, you will quickly find the lessons that you are suited to. You will instantly recognize the unparalleled quality of Steve’s teaching … END_OF_DOCUMENT_TOKEN_TO_BE_REPLACED

By the way, BIG COMPLIMENTS to you, Steve! Not only are you a great player, you are also a great teacher! I, too, am a woodwinds player/teacher. I have new inspiration to play and teach because of you. The concepts and “thinking” is similar to what I already learned in College, but hearing you explain and PLAY the concepts REALLY MAKES THE DIFFERENCE! Also, your written patterns are more interesting than other books I have seen! Keep up the good work. I will be recommending your sit… END_OF_DOCUMENT_TOKEN_TO_BE_REPLACED