Here’s another great David Mann transcription that was sent to me from Mark Sepinuck. John Blevins did all the hard work of transcribing this one. He’s braver than I am to tackle the cadenza at the end of this solo………..Thanks for transcribing this John! 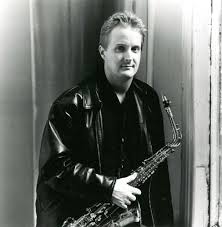 Here’s a short bio of Dave that I found on the internet:

Fresh out of the New England Conservatory of Music and new on the New York scene, David launched his solo career in the formative days of contemporary Jazz with the popular “Games” (1987) and “Insight” (1989) on the Island/Antilles label. Along with his brother, bassist Ned Mann, came the 1993 release of The Mann Brothers “Mann to Mann” on DMP Records. In 2001, David released “Touch” on N-Coded Music, which showcased his full range of abilities as a composer, producer, programmer, and of course as a saxophonist. Named “one of the best albums of the year” and “debut artist of the year” by Jazztrax, “Touch” finds David in fine company, teaming up with Bob James, Chris Botti, Chuck Loeb and Chieli Minuchi. Along with working on his own albums, David has become an increasingly accomplished composer and producer, working with such artists as Wayman Tisdale, Nelson Rangell, Steve Cole, Kim Waters, Point of Grace, and Rachel Z. In 2001 alone, David scored two #1 NAC singles (with Wayman Tisdale and Steve Cole).

David Mann is using the 10mFan Robusto hard rubber tenor mouthpiece on this clip.  I think he sounds amazing on this mouthpiece.  It’s the perfect blend of a full fat tenor sound mixed with some edge and brightness to give a modern sound to his tone.  The mouthpiece doesn’t sound thin or too edgy at all to my ears but perfect when Dave is playing it……….

If you are interested in the Robusto mouthpiece you can contact  Mark Sepinuck on his website at 10mfan.com.  Mark is a great guy to deal with and can steer you in the right direction.  Thanks again to John Blevins who transcribed this one.    Steve

I’ve been a member of Steve’s site for about six months now and the difference it has made to my playing is immeasurable. The (many) benefits of this membership are that you can have lessons at time convenient to you, they work out A LOT cheaper than face-to-face lessons with a teacher of the same calibre and you can replay them ad infinitum. I don’t know how many times have I had lessons in the past where I’ve ended up covering the same concepts when really a ‘replay’ of the last lesson would h… END_OF_DOCUMENT_TOKEN_TO_BE_REPLACED

By the way, BIG COMPLIMENTS to you, Steve! Not only are you a great player, you are also a great teacher! I, too, am a woodwinds player/teacher. I have new inspiration to play and teach because of you. The concepts and “thinking” is similar to what I already learned in College, but hearing you explain and PLAY the concepts REALLY MAKES THE DIFFERENCE! Also, your written patterns are more interesting than other books I have seen! Keep up the good work. I will be recommending your sit… END_OF_DOCUMENT_TOKEN_TO_BE_REPLACED

I just started looking at my lessons and I have to say, dude you are awesome.  I ABSOLUTELY will learn from you!  I started the tenor about 1 ½ yrs ago and have since picked up an alto, and more recently a soprano.  I spend most of the time on the tenor, followed by soprano, and have only gotten to the alto a few times.  I think I’ll be sticking with tenor.  I’m having a great time and hope one day to play well enough to get regular gigs.  I’ve been playing keys for about 35 years (… END_OF_DOCUMENT_TOKEN_TO_BE_REPLACED