Today, I am reviewing a Fred Lamberson F Major alto saxophone mouthpiece. Fred Lamberson has been making great mouthpieces for years. He hasn’t been making as many in recent years so they are harder to find recently. Most of the sax players who have one seem to be hanging on to them, as you don’t see them for sale very often. This is a testament to how good they are. The Lamberson mouthpieces I have played have all been excellent mouthpieces! 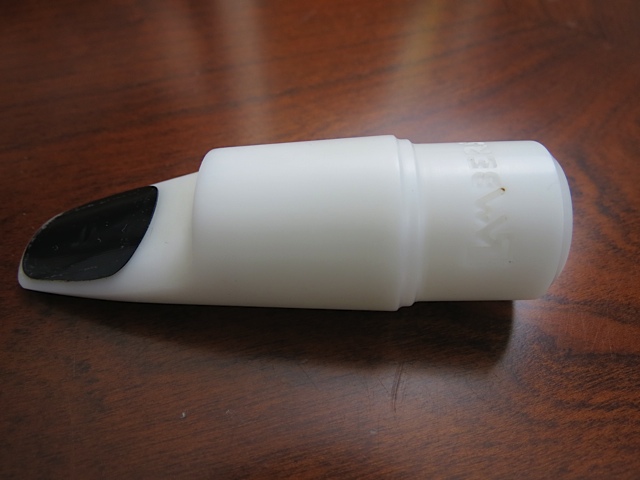 This F Major alto mouthpiece is made out of Delrin, also called acetal. This is what Fred says about it on his website:

“I am now making mouthpieces from acetal. This is a type of nylon that has a translucent milky white color and it has it’s own unique sound. It’s a hard, very tough material and is louder and stronger than rubber, just not as warm. Even though it is pure plastic, it has a lot of the warmth and playing characteristics of rubber. I think this is so because it is flexible and vibrates freely like rubber. It’s not a brittle material at all and it’s so tough you could drive a truck over it.”

The F Major alto mouthpiece is described as having little to no baffle on The Lamberson website. Contrary to that description, this mouthpieces has what I would consider a medium baffle in it and is quite a bit brighter and crisper in tone than the other F Majors I have played. It doesn’t have a high rollover baffle at the tip but the baffle gently slopes to a medium height at the chamber and then drops into the chamber at that point. The tip and rails look perfect and the mouthpiece played very easily with a Woodstone #3 reed. The Delrin material, although really hard, has a very soft and smooth texture to it. 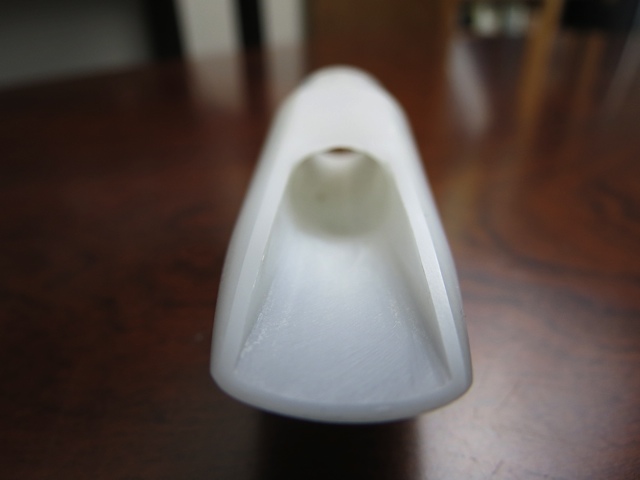 The tone of this mouthpiece was brighter in comparison to other F Major alto mouthpieces I have played before. It has a strong centered core to the tone. My first thought when I played this mouthpiece, was that it has a killer lead alto tone. The tone has a enough brightness and power that I believe it could be heard over a sax section easily. Even though the tone is brighter, it is still jazzy and would sound great playing bebop type lines. If you wanted you could easily morph into a Sanborn type sound on this mouthpiece also.

If you are interested in a mouthpiece like this, you’ll have to keep your eyes peeled for one. They are not very common. You could try contacting Fred Lamberson and get on his waiting list but that could take a while. In the meantime, check ebay a lot. This mouthpiece is actually for sale on ebay by the owner even as I type this so if your quick…………….

Thanks again to Fred Lamberson for his service to the saxophone community. He is a true artist when it comes to making mouthpieces and has helped many saxophone players find their perfect mouthpiece. 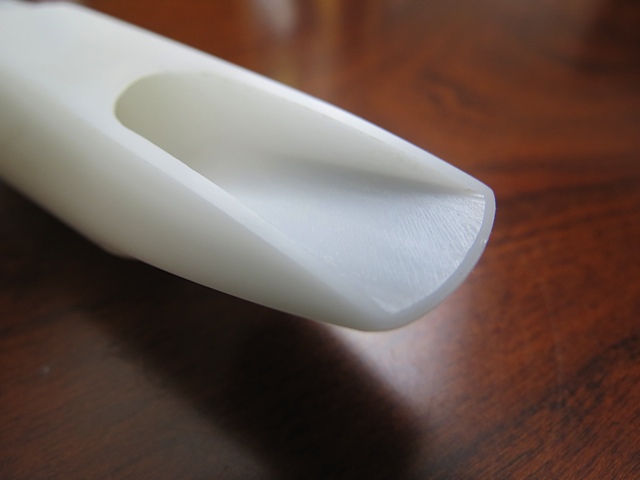 By the way, BIG COMPLIMENTS to you, Steve! Not only are you a great player, you are also a great teacher! I, too, am a woodwinds player/teacher. I have new inspiration to play and teach because of you. The concepts and “thinking” is similar to what I already learned in College, but hearing you explain and PLAY the concepts REALLY MAKES THE DIFFERENCE! Also, your written patterns are more interesting than other books I have seen! Keep up the good work. I will be recommending your sit… END_OF_DOCUMENT_TOKEN_TO_BE_REPLACED

Steve’s monthly lessons are entirely valuable. Without brow beating, he tells you all the stuff you deep down know you really should be working on, instead of just relying on the same old patterns. In spite of the fact that you’re taking a video lesson, Steve’s presentation is comfortable and “real”. In a little more than a year, he’s developed a library of lessons that seem to offer any player a lifetime’s worth of practice material. I’m just glad I stumbled upon it.… END_OF_DOCUMENT_TOKEN_TO_BE_REPLACED

Mr. Neff,  I want to thank you for sharing your God-given talents through your on-line lessons.  My husband, Michael, is blind, but he is a great sax player and he has been enjoying your lessons for quite some time now.  It’s not unusual for me to hear “Hey, babe, listen to THIS!” – and he will cut loose on his sax, just thrilled at what he learned during his session with you.  His excitement warms my heart!  You have no idea how much you have poured into my husband.  You have opened musical … END_OF_DOCUMENT_TOKEN_TO_BE_REPLACED

It is so refreshing to have a great player, who can provide lessons and examples in a manner which is understandable to most any enthusiastic saxophonist who is ready to improve. not just the, do this, do that, memorize this, memorize that… while all that is absolutely necessary, you go on to give reasons and examples to explain and validate why you have to do all of these things, the benefits, if you will… that is the key for me, you tell, explain, demonstrate, explain some more, you give perso… END_OF_DOCUMENT_TOKEN_TO_BE_REPLACED

I bought Steve’s dominant bebop book and took a couple of online lesson from him. I really appreciated Steve’s careful listening of what I wanted to get done in a lesson and his clear, concise ideas on next steps to improve my playing and musical interpretation.  His mastering  the Dominant Bebop Scale has lots of exercises to use a scale that addresses the largest percentage of chords I come across in pop/blues music. The dominant V7.  Needless say it has improved my playing.  I teach and a… END_OF_DOCUMENT_TOKEN_TO_BE_REPLACED

Two years later I began a search for a sax teacher and happened to come across Steve Neff when I was searching YouTube for sax teachers.  I went to neffmusic.com and was very impressed with the lessons Steve Neff was offering.  The concept of selecting lessons was an approach that I thought was unique and purchased a few lessons.  I liked the lessons so much that I signed-up for a 6 month package. I was very happy with all the lessons I selected.  I also purchased Steve’s book Mastering the B… END_OF_DOCUMENT_TOKEN_TO_BE_REPLACED