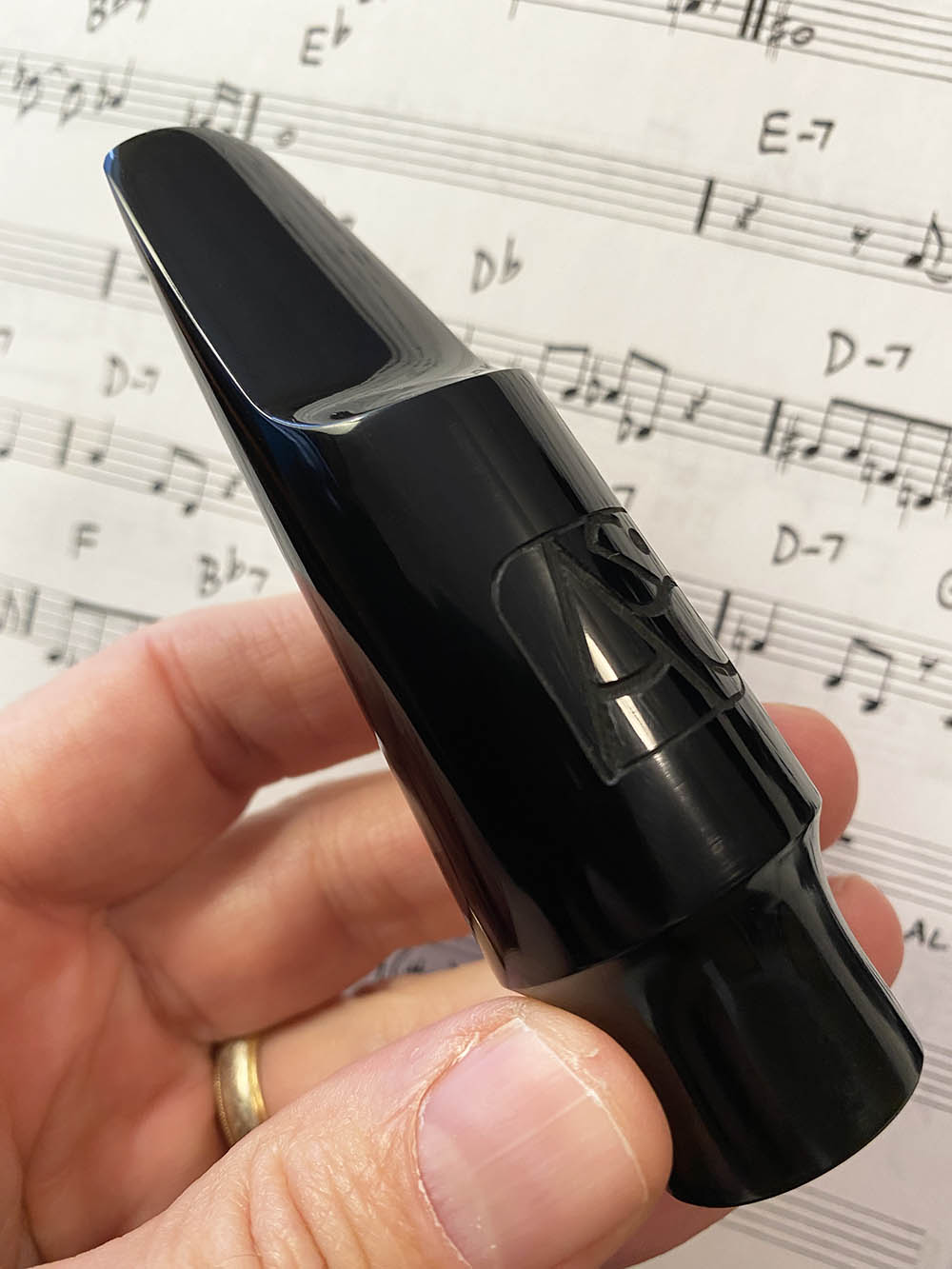 The Foehn is a dry, warm, down-slope wind blowing in the Alps.

This hard rubber piece has a medium-large round chamber and a customizable rollover baffle. It is a crossover between a Slant Sig and an EB. It has a medium sound with lush lows and powerful highs. This piece is fitted with a very responsive facing curve for projection and the right amount of resistance to push against for better control of the altissimo register. This piece is at ease in a variety of situations from big band to pop music.

Yeah, if you are like me, you probably don’t know what to do with the “The Foehn is a dry, warm, down-slope wind blowing in the Alps.”  Let’s just skip over that part of the description to the part sax players understand; hard rubber, medium-large round chamber, rollover baffle, lush lows and powerful highs, very responsive facing curve, etc…….. 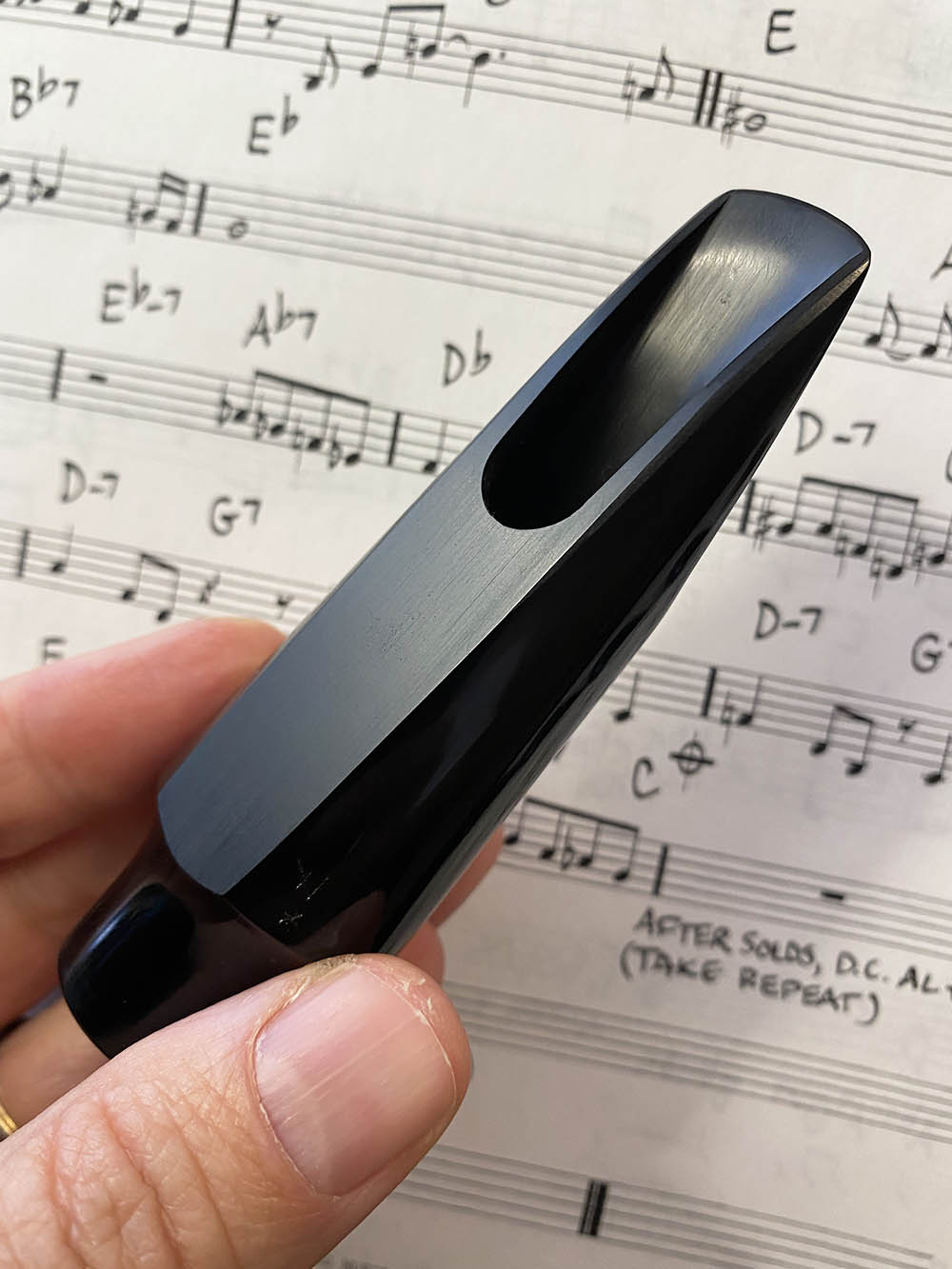 The ASC Foehn mouthpiece tip, rails, table and baffle all look great.  The tip rail is thin and even and the tip matches up with my tenor saxophone reeds nicely.  The side rails are thin and even as well.  The sidewalls on either side of the baffle look to be straight for about an inch and then are scooped out as they near the chamber of the mouthpiece. 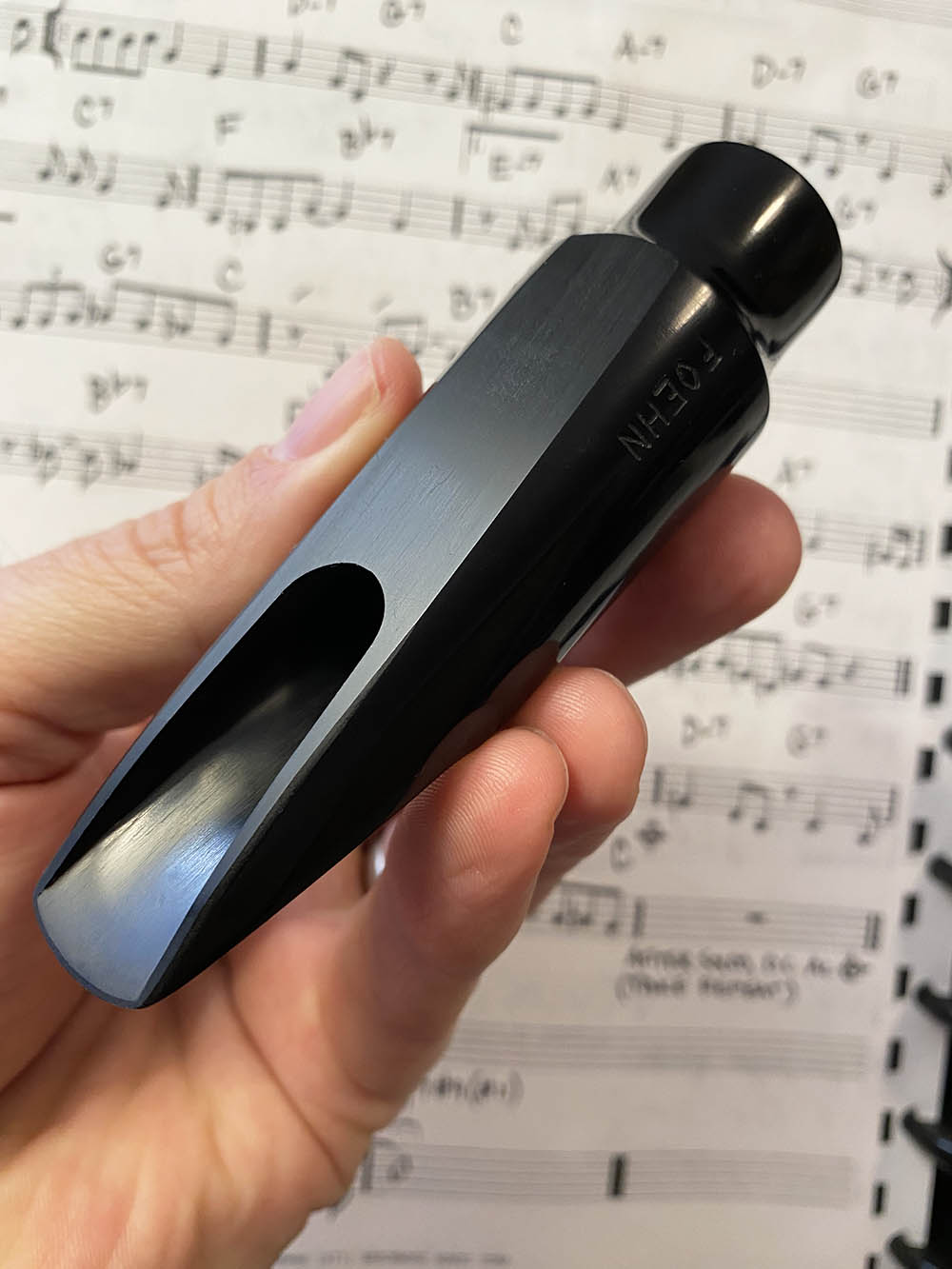 The baffle of the ASC Foehn tenor saxophone mouthpiece is a pretty substantial rollover baffle.  The baffle travels at a medium high height for about an inch before it scoops down into the chamber.  For comparison, the baffle of the Foehn mouthpiece is higher and longer than a couple of Otto Link Early Babbitt Connoisseur tenor mouthpieces I have sitting on my desk right now.  The baffle is scooped from side to side as it travels down to the mouthpiece chamber.  Just from inspecting the generous baffle, my guess is that the ASC Foehn tenor sax mouthpiece would play with a nice amount of brightness and power. 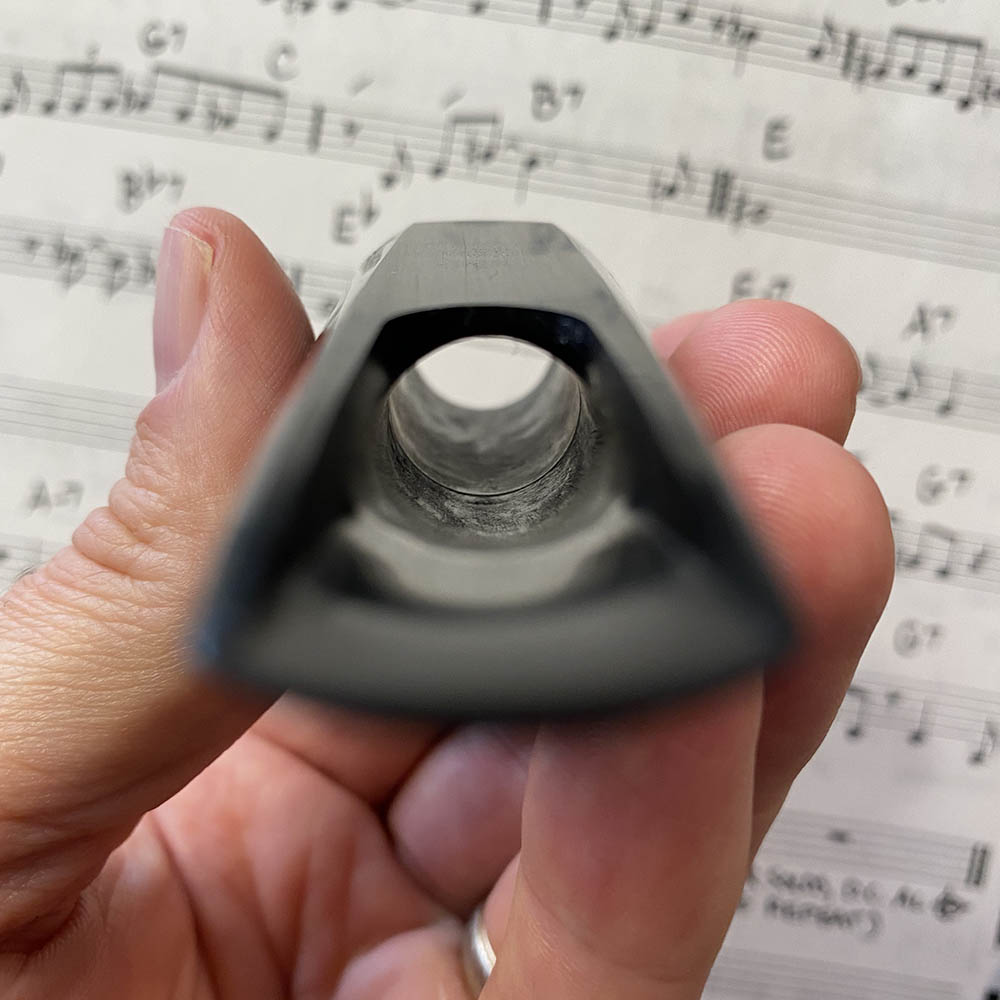 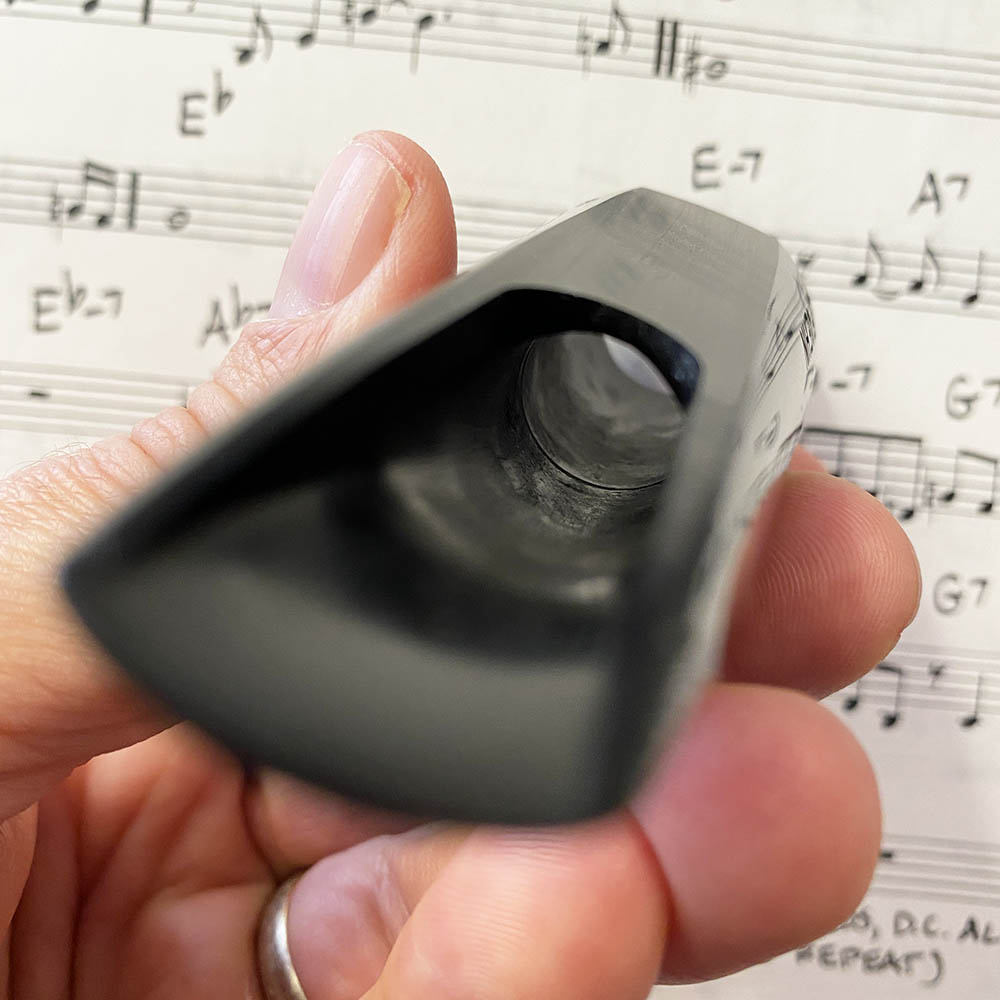 The mouthpiece beak of the Avel Sound Concept Foehn tenor sax mouthpiece has a low profile to it that I really liked.  It feels very comfortable for me when compared to how a hard rubber tenor sax mouthpiece with a high beak profile feels.   Something about a lower beak profile on a hard rubber mouthpiece always makes me feel like the tone is a bit brighter and more powerful.  I believe this is because the vibrations more easily travel from the mouthpiece, through the narrow beak, and to my teeth and then ear. 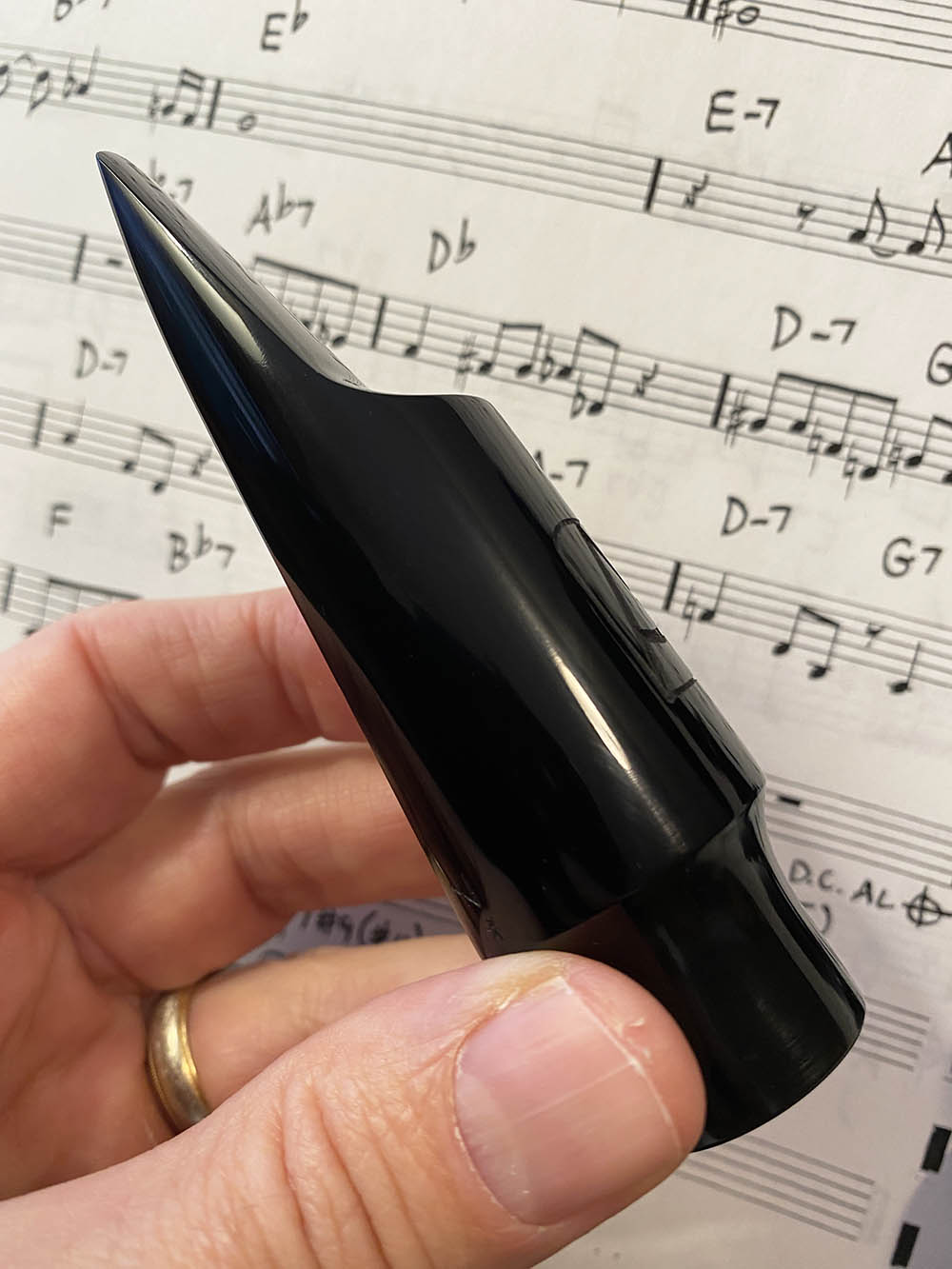 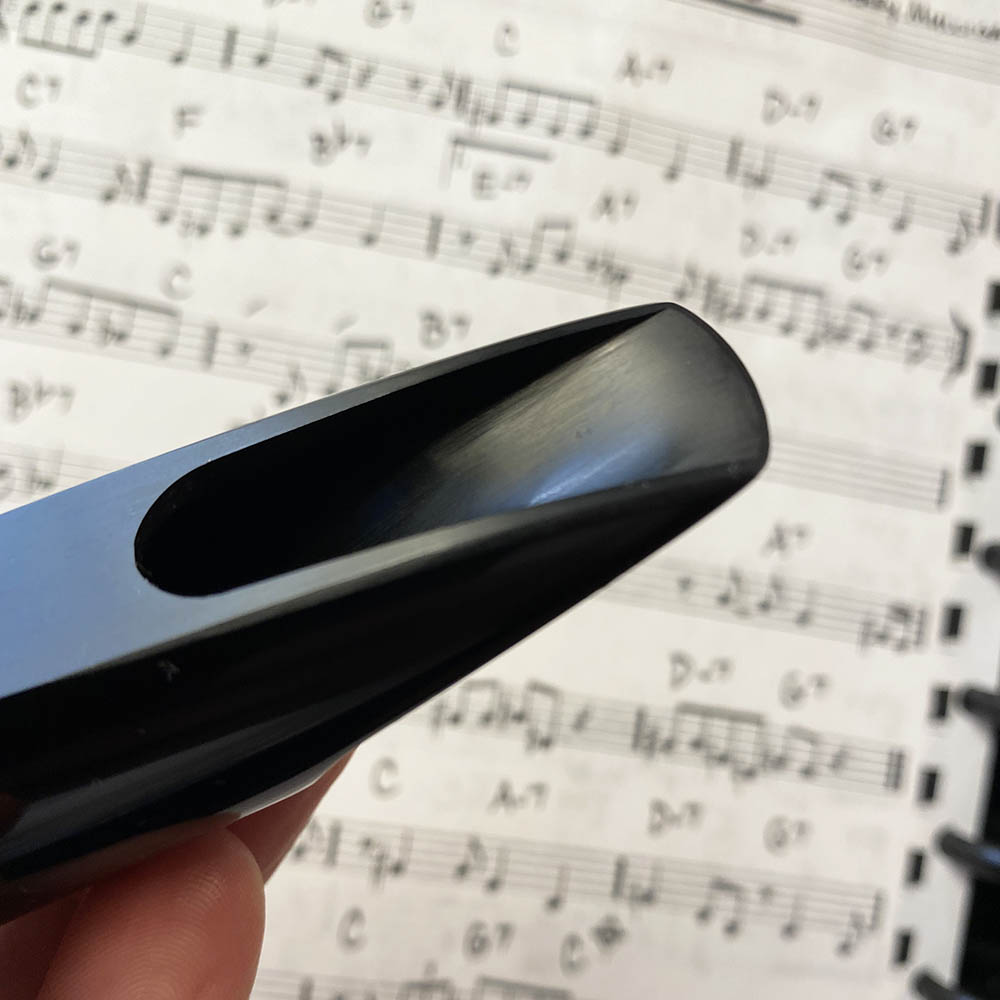 The Avel Sound Concept Foehn tenor saxophone mouthpiece played great for me. I found the ASC Foehn mouthpiece to have a beautiful brightness to the core sound that gave the high register a ringing and singing quality to the notes. I assume this brightness in the sound is the effect of the high rollover baffle and medium chamber.

The ASC Foehn mouthpiece had plenty of power and brightness when pushed as you can hear in the louder parts of the sound clip where I play more aggressively.  I believe some of the brightness and crispness is due to the ability to use a softer reed on the Foehn’s shorter facing curve.  The softer reed sounds crisp and the shorter curve gives it enough resistance so it doesn’t sound like a wet noodle like on other tenor mouthpieces with a longer facing curve on them.

Sometimes, like on my JVW Otto Link, the shorter facing curve can make the low register not as lush and thick sounding as it might with a longer facing curve but the ASC Foehn seems well balanced in that the low notes sound thick and full.  You can hear how the Foehn sounds so good playing on a ballad or laid back jazz tune.  The soft reed allows the low notes to have a lush and fat quality to them that makes them sound great to my ears.

The intonation of the Foehn tenor mouthpiece was excellent and the scale and range of the saxophone sounded smooth and even to me as I played.    The altissimo register was easy to play and I found the ASC Foehn mouthpiece to be expressive and easy to control.

I have included a long sound clip below with no effects and another short clip with reverb added so you can hear how the ASC Foehn tenor sax mouthpiece might sound on a live gig in a big hall or with reverb added to it while recording. 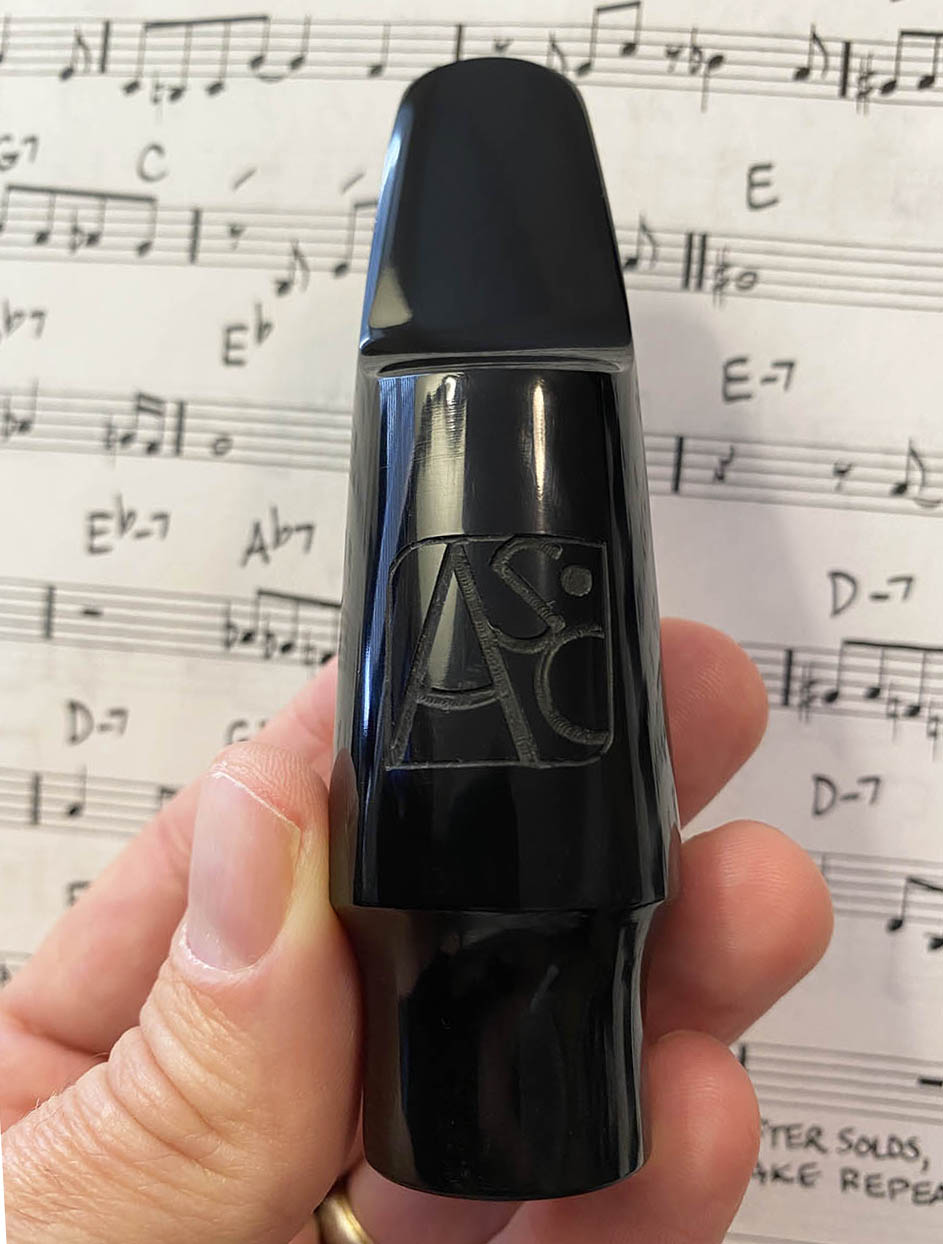 If you are lucky enough to play a Avel Sound Concept Foehn tenor saxophone mouthpiece or have any other thoughts or comments, I would love to hear what you think in the comments below.  Thanks,  Steve

I just started looking at my lessons and I have to say, dude you are awesome.  I ABSOLUTELY will learn from you!  I started the tenor about 1 ½ yrs ago and have since picked up an alto, and more recently a soprano.  I spend most of the time on the tenor, followed by soprano, and have only gotten to the alto a few times.  I think I’ll be sticking with tenor.  I’m having a great time and hope one day to play well enough to get regular gigs.  I’ve been playing keys for about 35 years (… END_OF_DOCUMENT_TOKEN_TO_BE_REPLACED

I’m an experienced player in the pop/soul/funk areas of music and, previously, classical.  Over the decades I’ve been playing, I’ve always felt that I could do what I needed in those styles of music.  However, recently I began to feel limited by my use of the same old licks. When I discovered Steve Neff’s website, and heard the audio examples based on the exercises in his books, I realized they were what I needed.  I purchased all of them and have been working on them since.  It’s very hard work… END_OF_DOCUMENT_TOKEN_TO_BE_REPLACED

By the way, BIG COMPLIMENTS to you, Steve! Not only are you a great player, you are also a great teacher! I, too, am a woodwinds player/teacher. I have new inspiration to play and teach because of you. The concepts and “thinking” is similar to what I already learned in College, but hearing you explain and PLAY the concepts REALLY MAKES THE DIFFERENCE! Also, your written patterns are more interesting than other books I have seen! Keep up the good work. I will be recommending your sit… END_OF_DOCUMENT_TOKEN_TO_BE_REPLACED