You are here: Home / Reviews / Saxophone Stuff / Do Mouthpiece Patches and Beak Height Make a Difference to the Sound of a Saxophone?

Today, I am posting a personal experiment of mine to answer some questions I have about the discernible differences a mouthpiece patch and the mouthpiece beak height make to the sound of the saxophone.  I know many of you out there will perhaps think this is foolish but I am doing this to satisfy my own personnel curiosity. 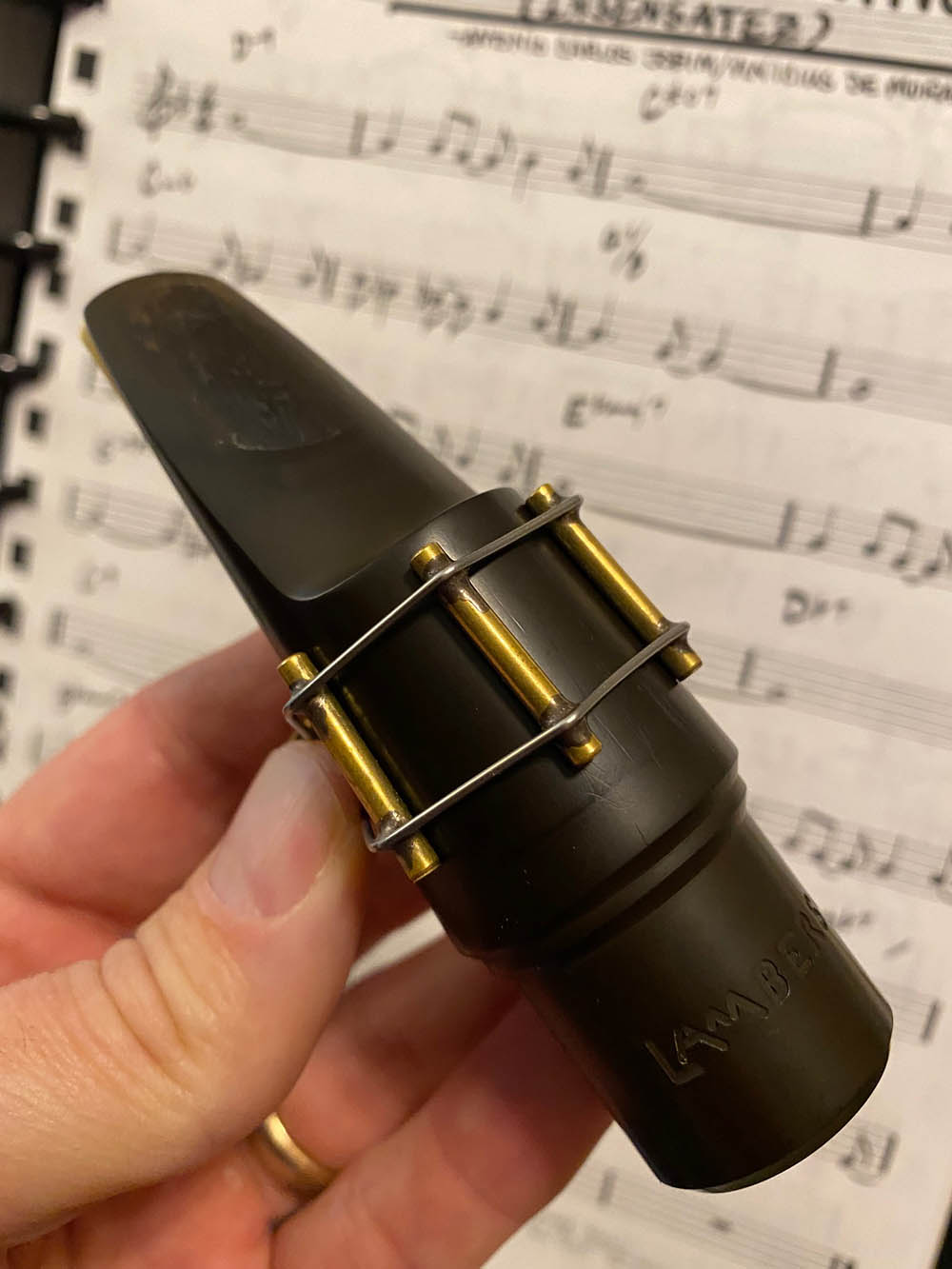 These questions of mine started a long time ago when I was playing the saxophone in college.  I  remember my sax teacher at the time telling me that I could put a mouthpiece patch of some tape or rubber onto the beak of my sax mouthpiece to prevent the deep teeth marks I was putting in my saxophone mouthpieces at the time.

This was good news for me because every mouthpiece I had played had deep teeth gouges worn into the beak of each mouthpiece.  I know, I know, we are not supposed to bite like that while playing the saxophone, but I was a young energetic alto sax player trying to sound like Dave Sanborn and Mark Russo and biting just seemed to get me closer to that goal at the time.  I apologize for not being a good saxophone playing role model in my younger years……..

Upon trying a patch on my mouthpiece back then, I noticed an immediate change in my saxophone sound.  For classical music, this change was fine but for my jazz playing, I felt like the patch really effected my tone in a negative way.  The mouthpiece patch seemed to dull the tone and take some of the highs and brights that I loved in my sound away.  At least that was my impression as I played my saxophone with a patch on my mouthpiece.

The sound I was used to hearing through my ears and inside my head while playing was completely changed and I did not like that.  I was at a point where I was really starting to dig that sound I was producing and hearing while I played, the last thing I wanted to do was to change what I was hearing while playing. 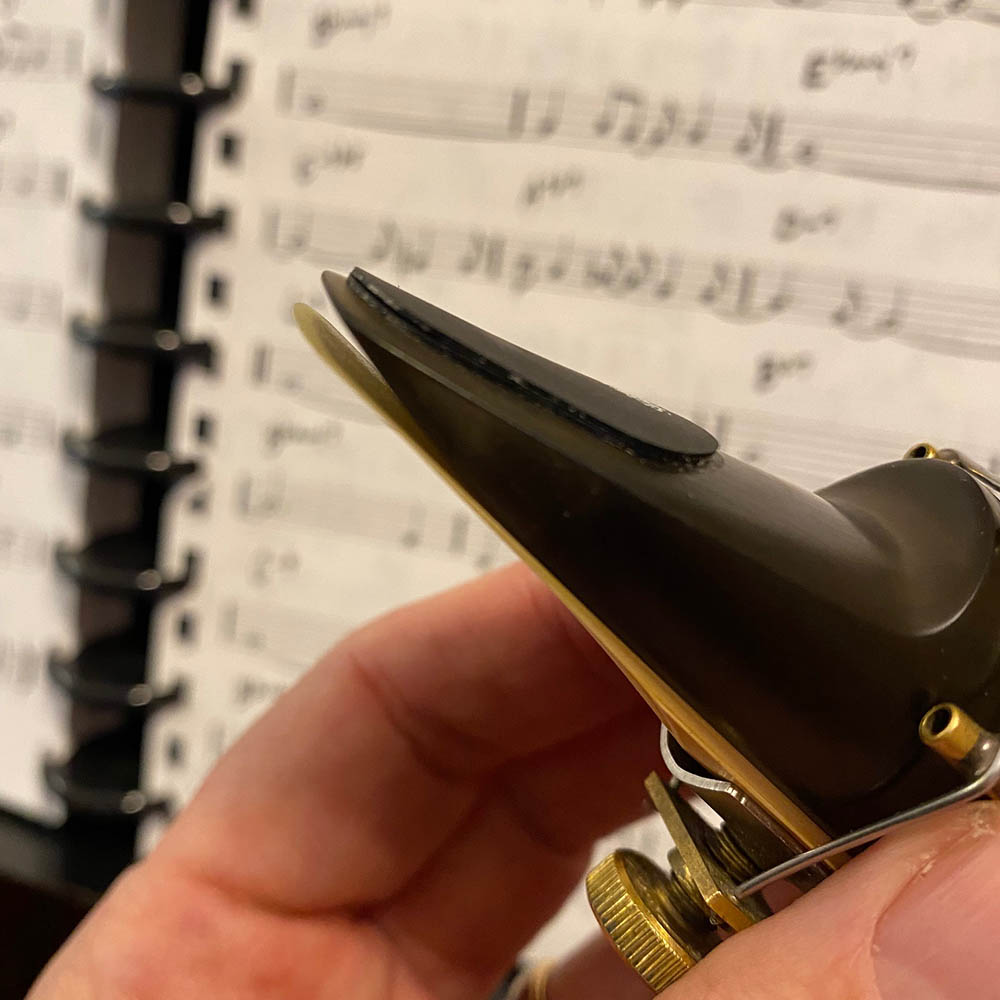 Years later, when I started trying out different saxophone mouthpieces, I would revisit mouthpiece patches again and I have been using them ever since on my mouthpieces to protect them.  But still, even today, I find myself wondering what, if any, perceivable difference a mouthpiece patch makes to the saxophone tone from the perspective of the listener.

I have read many views and opinions on this subject on the internet over the years that say a mouthpiece patch can make a difference in sound to the player because it dulls the vibrations traveling through the mouthpiece, into the teeth, up the jaw and to the ears of the player, but the difference to the audience is insignificant and negligible.  Some have written that there is no difference to the listener whatsoever.   Still, how could such a drastic change in tone be so obvious to me the player, but the listener hears no difference whatsoever? 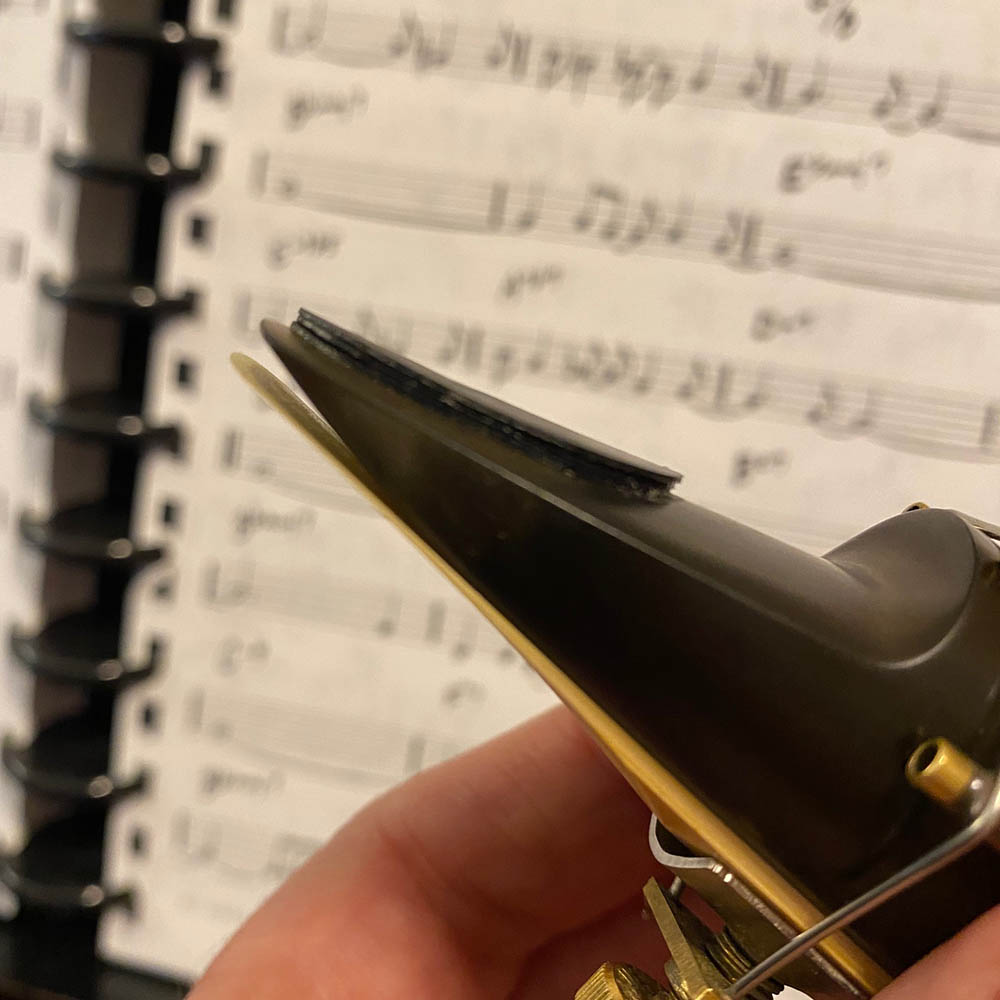 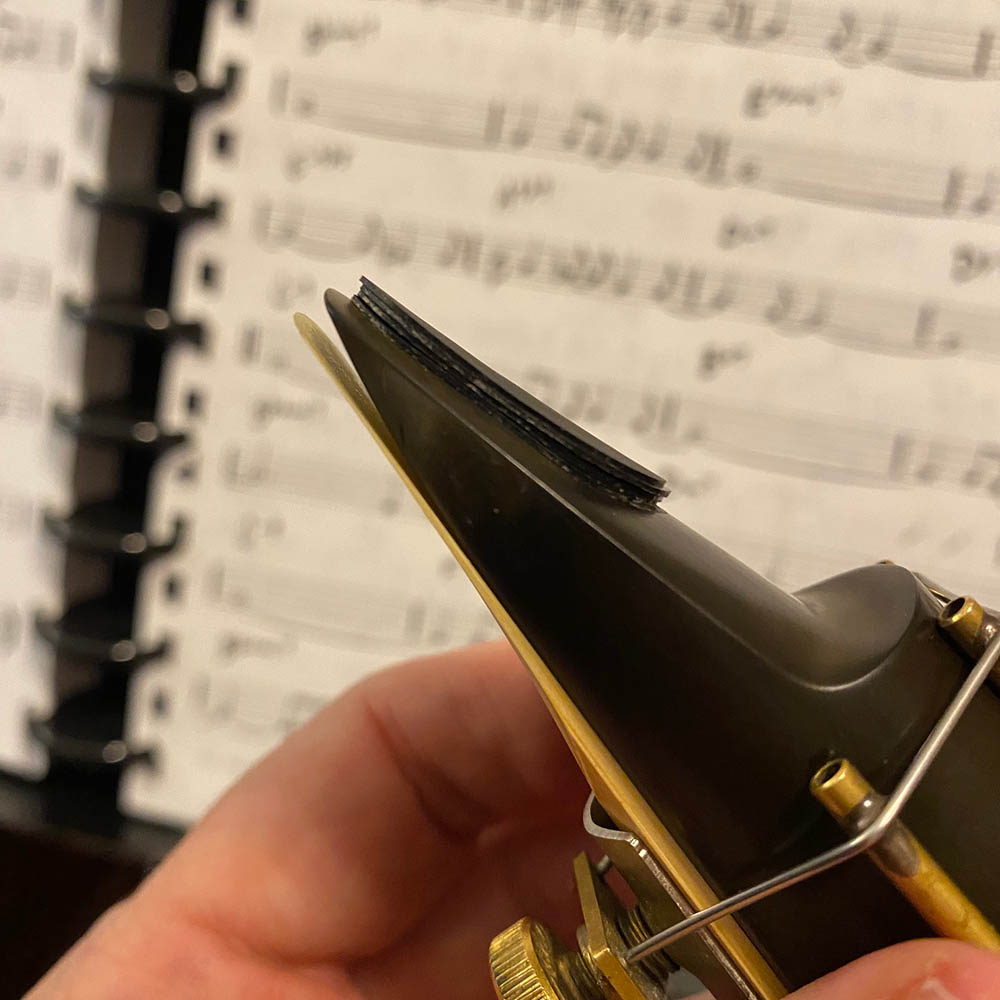 Please keep in mind that everything I have stated so far in this article has been based on my subjective impressions, experiences, opinions and random stuff I have read on the internet.  The point of this article was to record some clips of me playing the same thing with a different variety of mouthpiece patches on my mouthpiece and to see if the differences I hear in my head are at all perceivable on the recordings. 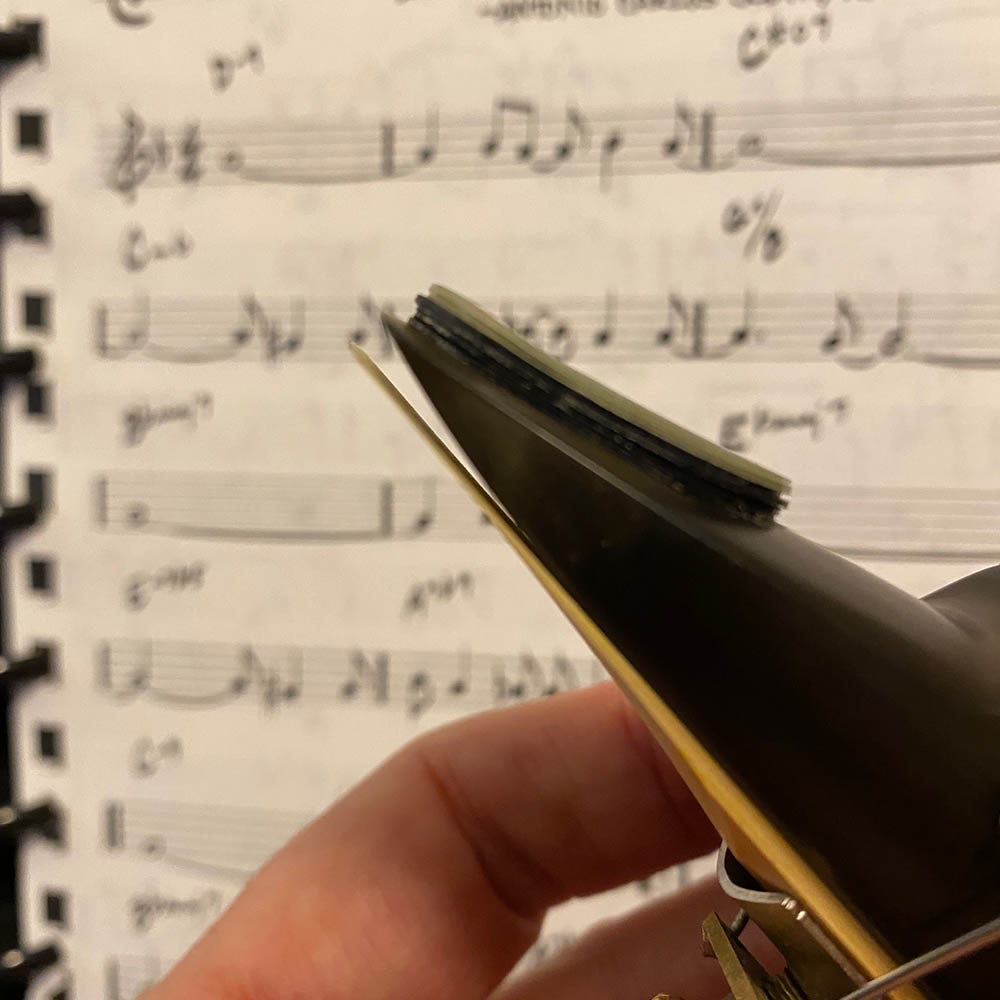 On the seven clips below, I play the beginning melody to “My One and Only Love” on the tenor saxophone with a Lamberson J7 tenor saxophone mouthpiece.  The first clip is with no mouthpiece patch and my front teeth are just sitting on the hard rubber.  I honestly have not attempted to play without a patch like this in over 15 years I think.

In my head and ears, playing this first clip was almost unbearable!  The tone was incredibly loud, bright and edgy.   The sound in my head sounded so loud and bright that it felt like if I played like that all the time, I would probably lose the last of my hearing in my one good ear that is left.

The second clip is how I usually play with one mouthpiece patch on the mouthpiece. The volume in my head was more “under control” and was no longer unbearable.  The highs and brights also seemed to be less which to my ear was a good difference and change.

For the sake of this article, I wanted to experiment with thicker patches to reproduce the feel of a higher mouthpiece beak profile for the sound clips.  I recorded a clip with 2, 3, 4 and 6 mouthpiece patches piled on top of each other. 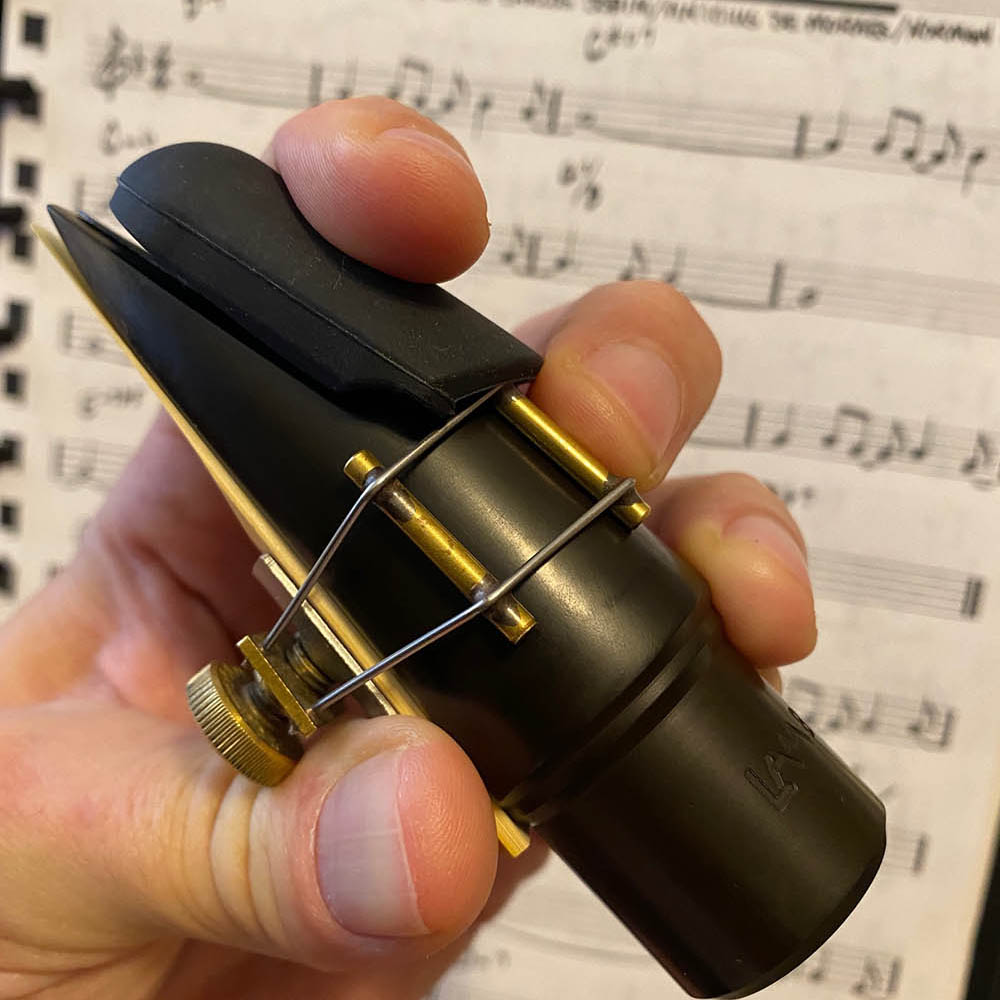 Lastly,  just for the heck of it, I decided to try playing with a thick piece of rubber between my top teeth and the mouthpiece (as seen in the photo above).  I used a rubber SYOS mouthpiece cap for this experiment and it was definitely not easy or comfortable but I wanted to see if that simulated higher beak profile would indeed make a difference in the perceived sound to the listener.  I had difficulty tonguing from this higher beak position and did not tongue the beginning notes of the melody like I did in the rest of the clips.

Listen to the sound clips below and let me know what you think in the comments below.  I found it helpful to listen to one segment of a clip and then play the same segment on the next clip and so on.   If you hear no difference whatsoever, that is fine, let me know.   If you do hear a difference between any of the clips, let me know that as well.  I tried to keep the clips as similar as possible but there are indeed some differences between the clips as far as my playing (it’s so hard to make someone who loves to improvise play the same exact thing over and over again…….)

Thanks for taking the time to listen.  Let me know what you think in the comments below.    Steve

*Please keep in mind that the better your speakers and sound system are, the more details you will hear in these clips.  Listening on your old iPhone while you ride the subway will probably not give you optimal results……….

*The sound clips below are lossless wave files for the most realistic sound and best quality.

PS. I swear I can hear a slight difference between the first note of each clip but is this my mind playing games on me or does the mouthpiece patch make a difference?  Does the first clip sound more vibrant?  I swear it does but then again, my brain might be hearing what it expects to hear.  Could I pick out this difference if the tracks were mixed up and it was a blind test?  Now that would be hard……..  You decide for yourself………

I want to say something about Steve Neff’s series of lessons, Beginner Jazz Improvisation. For a couple of years I tried many beginner lessons and my problem was that there was a gap between lessons that were fairly simple and ones that I was not quite ready for and my progress stalled out. That problem was solved with the series Beginner Jazz Improvisation. He guides you step by step along the way and builds a foundation for learning jazz and blues. He leaves no question about what to practice … END_OF_DOCUMENT_TOKEN_TO_BE_REPLACED

By the way, BIG COMPLIMENTS to you, Steve! Not only are you a great player, you are also a great teacher! I, too, am a woodwinds player/teacher. I have new inspiration to play and teach because of you. The concepts and “thinking” is similar to what I already learned in College, but hearing you explain and PLAY the concepts REALLY MAKES THE DIFFERENCE! Also, your written patterns are more interesting than other books I have seen! Keep up the good work. I will be recommending your sit… END_OF_DOCUMENT_TOKEN_TO_BE_REPLACED

Your major diatonic patterns book is great. I”m studying the first twenty patterns (first twenty pages) each day with different articulation each day and slowly increasing the tempo each week or so.  There is a noticeable improvement in finger coordination across all keys and its amazing how much more secure I feel on the difficult keys when attempting to play pieces with 5+ flats/sharps. I’m able to sort out the fingerings for these pieces now much more quickly than before, often in one or two … END_OF_DOCUMENT_TOKEN_TO_BE_REPLACED

I can see from your instructional videos that you are a fantastic teacher – one that can truly relate to all ages – humble yet very positive in approach – never coming across as superior and yet so totally capable of demonstrating the principles and techniques that you seek to impart to the students. I have gained so much confidence in my playing from “pouring over” time and again these invaluable lessons. Invaluable not only in musical content, but also in human interaction content. I am absolu… END_OF_DOCUMENT_TOKEN_TO_BE_REPLACED

Two years later I began a search for a sax teacher and happened to come across Steve Neff when I was searching YouTube for sax teachers.  I went to neffmusic.com and was very impressed with the lessons Steve Neff was offering.  The concept of selecting lessons was an approach that I thought was unique and purchased a few lessons.  I liked the lessons so much that I signed-up for a 6 month package. I was very happy with all the lessons I selected.  I also purchased Steve’s book Mastering the B… END_OF_DOCUMENT_TOKEN_TO_BE_REPLACED