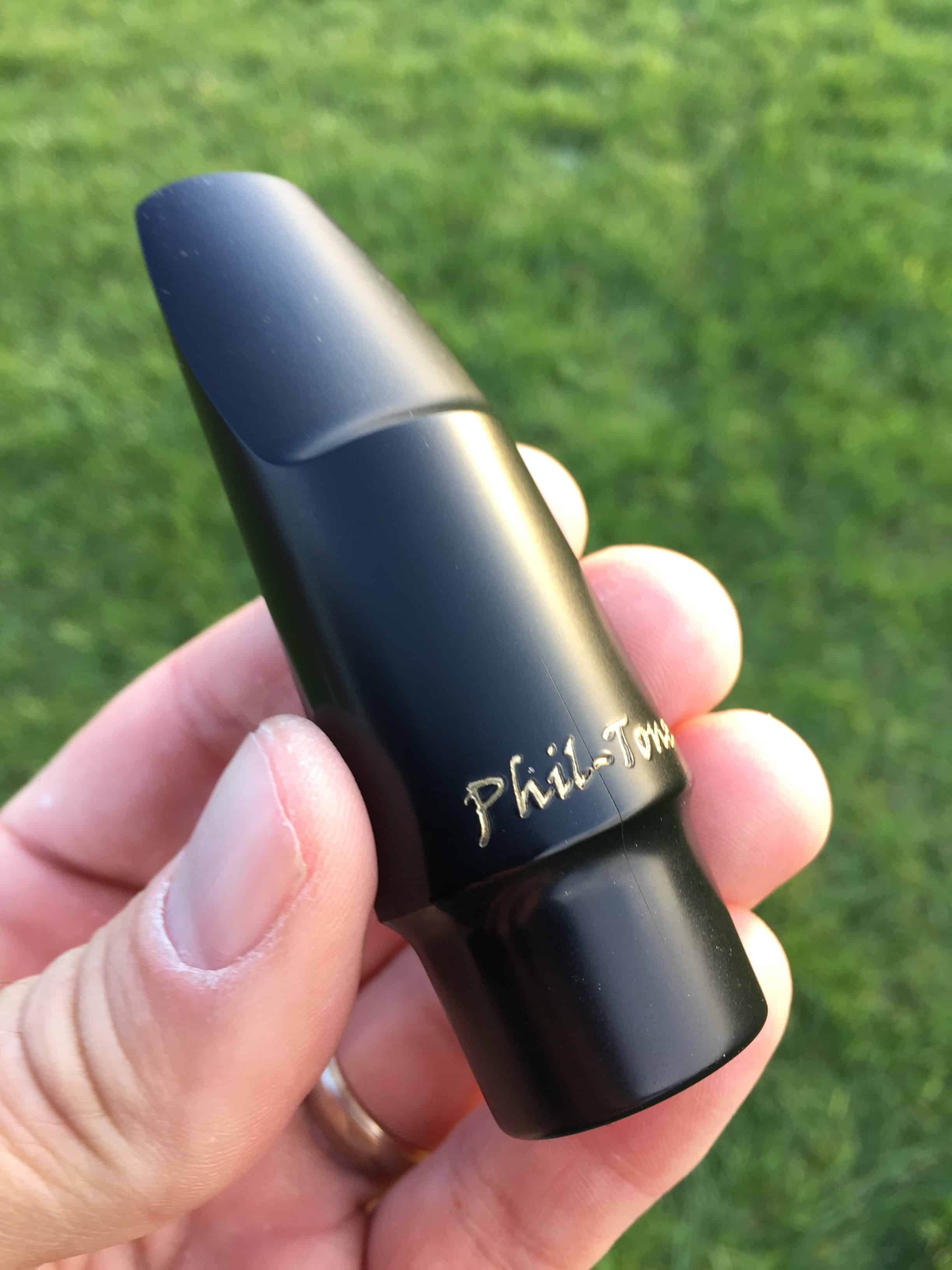 Here’s a quote from Phil about the new Orion alto sax mouthpiece from his website:

The Orion alto sax mouthpiece is a professional piece at an intermediate price. It achieves what no other mouthpiece can. Handmade precision and play tested adjustments for a price point of machine made pieces. The Orion is based on the old Brilly pieces…think Charlie Parker. It has the same chamber but with the response and accuracy you would expect from Phil-Tone. -Phil Engleman 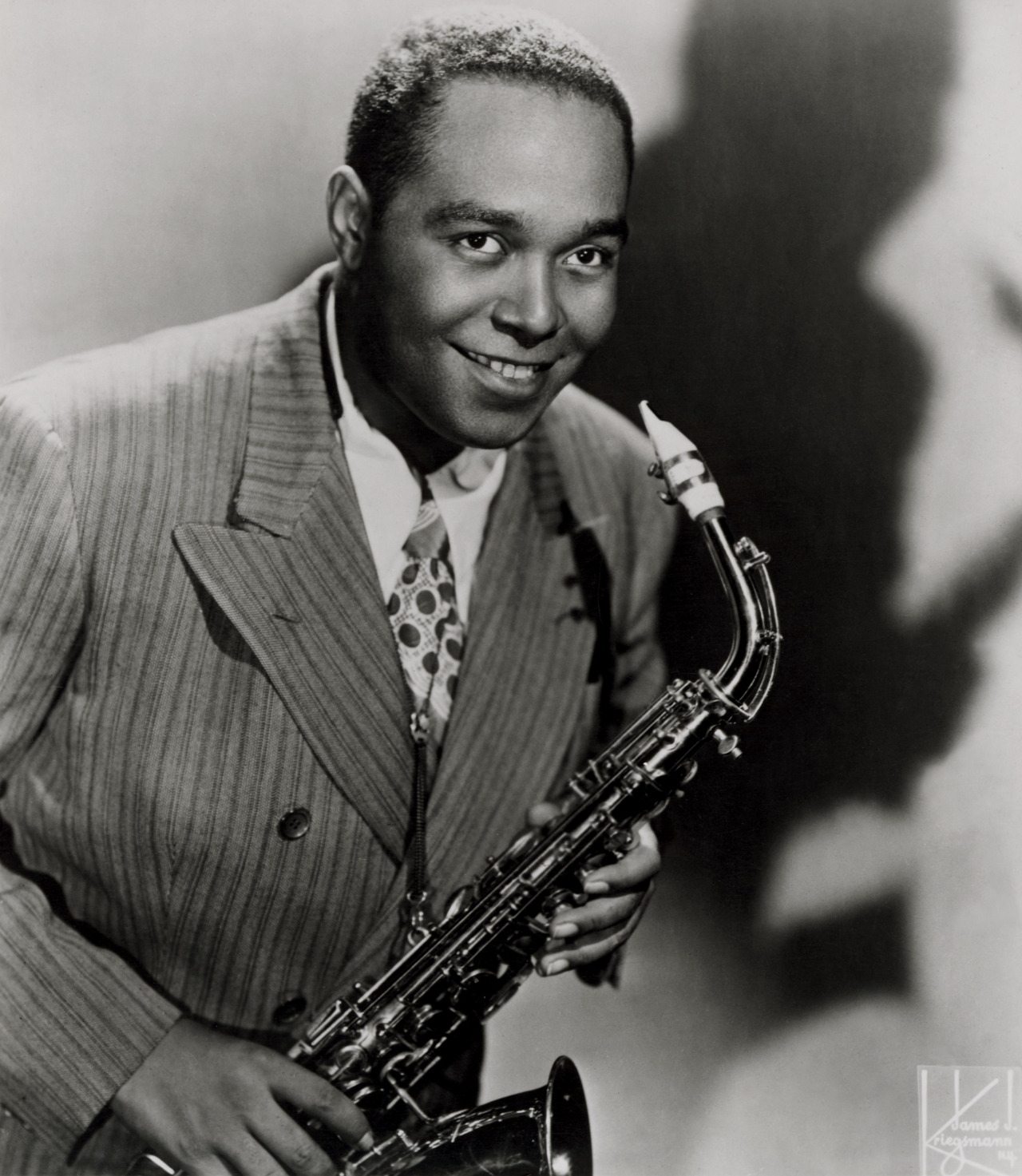 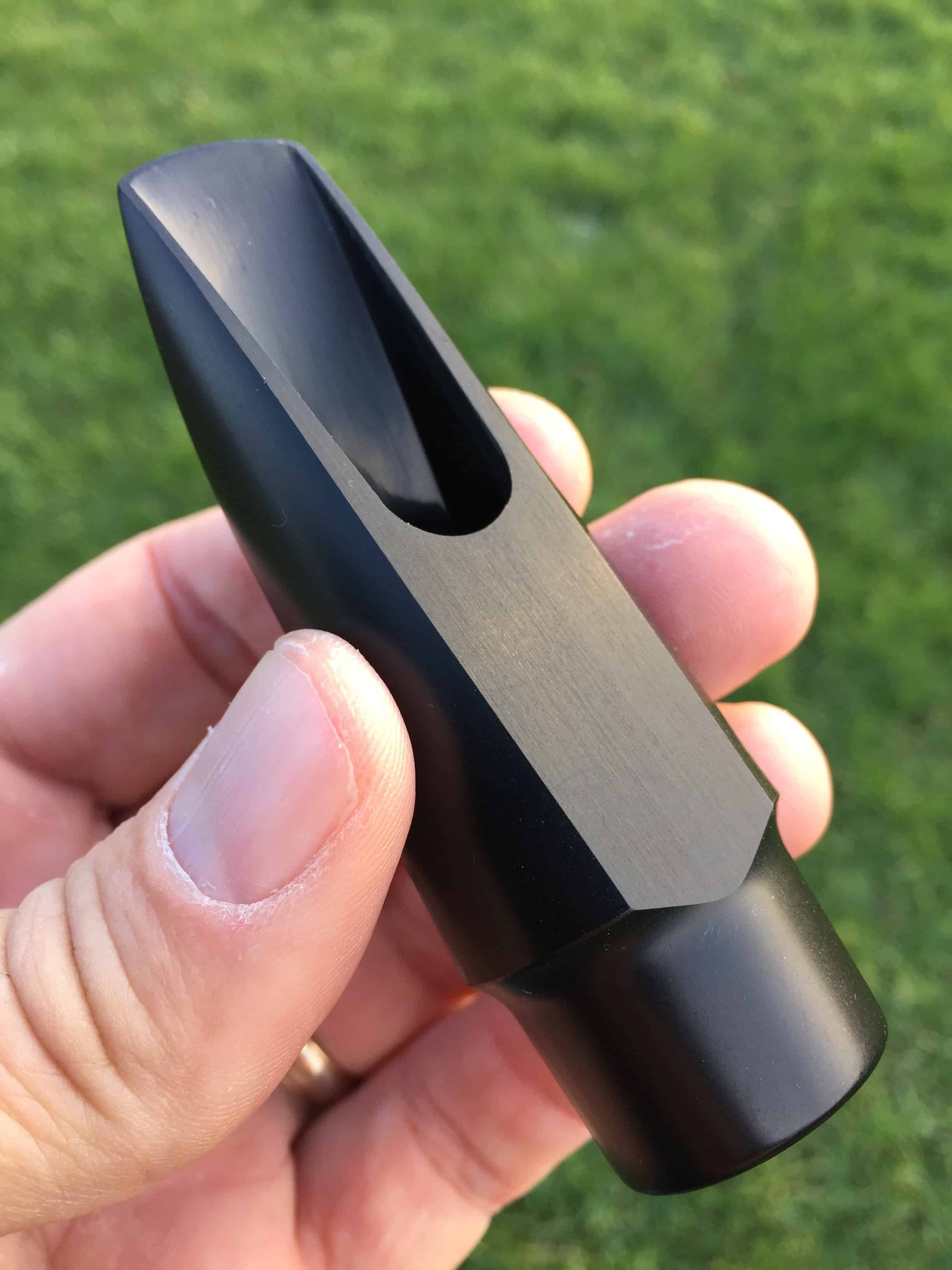 The mouthpiece tip rail is very close in shape to all of my alto sax reeds and the table and rails look even and well made as they are on all of the Phil-Tone mouthpieces.  The baffle has a nice medium rollover to it and then the baffle heads down at a curve into the chamber area.  After the baffle rolls over, the descending slope of the baffle looks to have a side to side curve to it where the outside edges are a little higher than the center. The sidewalls are straight and look to angle inward slightly as they approach the chamber area. 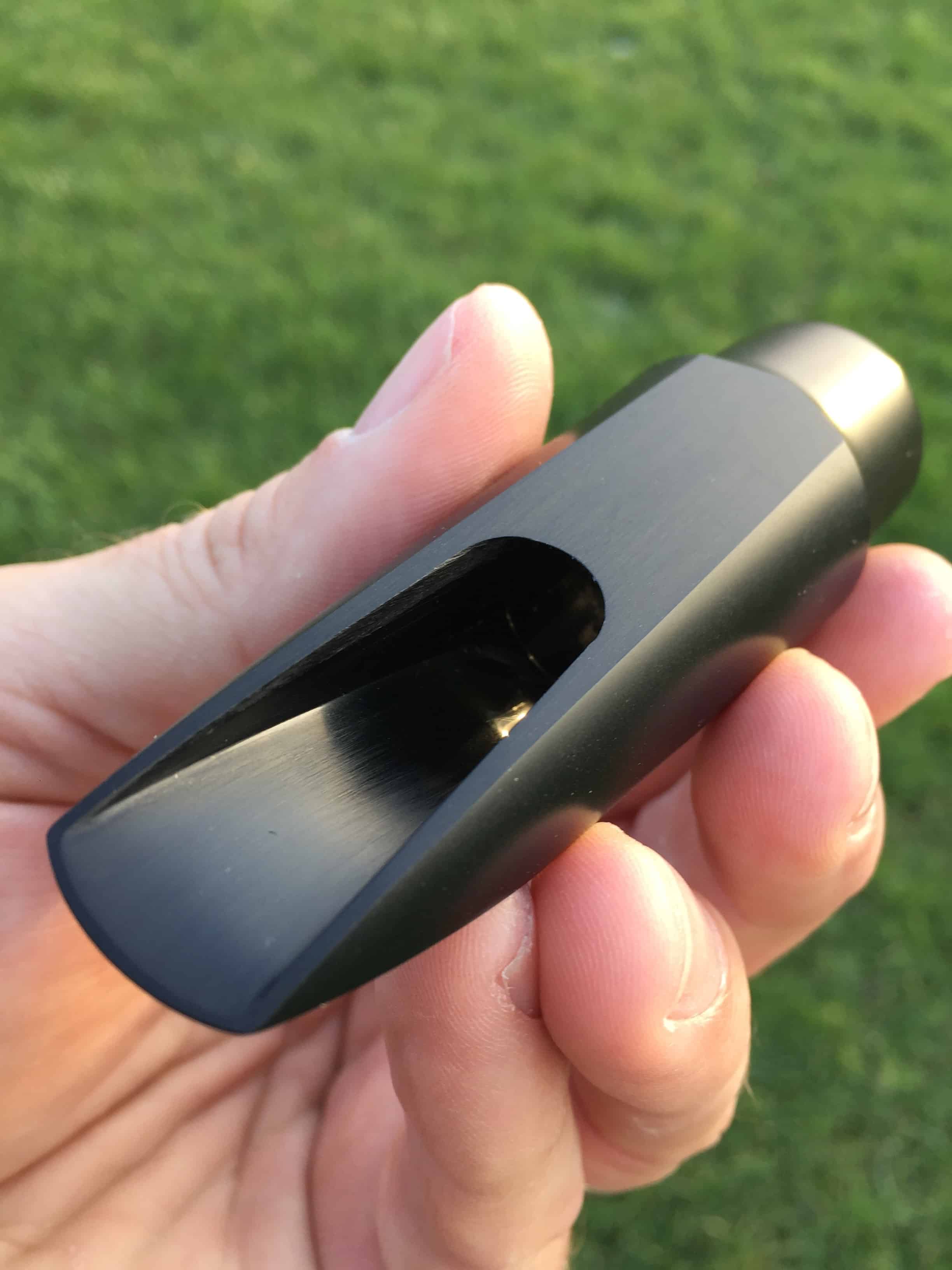 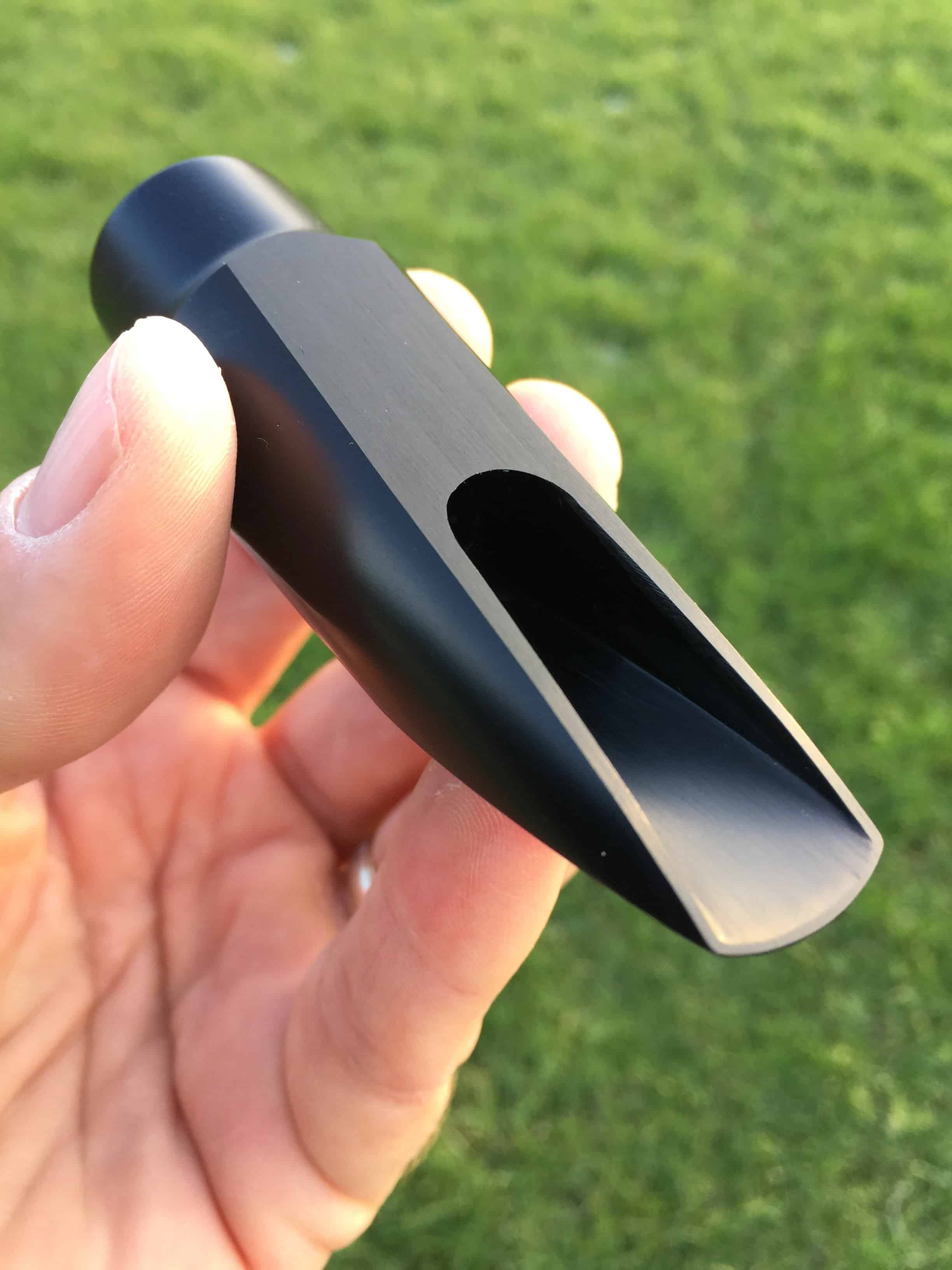 The Phil-Tone Orion alto saxophone mouthpiece played incredibly well with every reed I tried on it.  It was very reed friendly!  I ended up recording with a Lupifaro Evo 3 reed that Lupifaro sent me to try out but my Rigotti Gold and Boston Sax Shop alto sax reeds played equally as well on it. 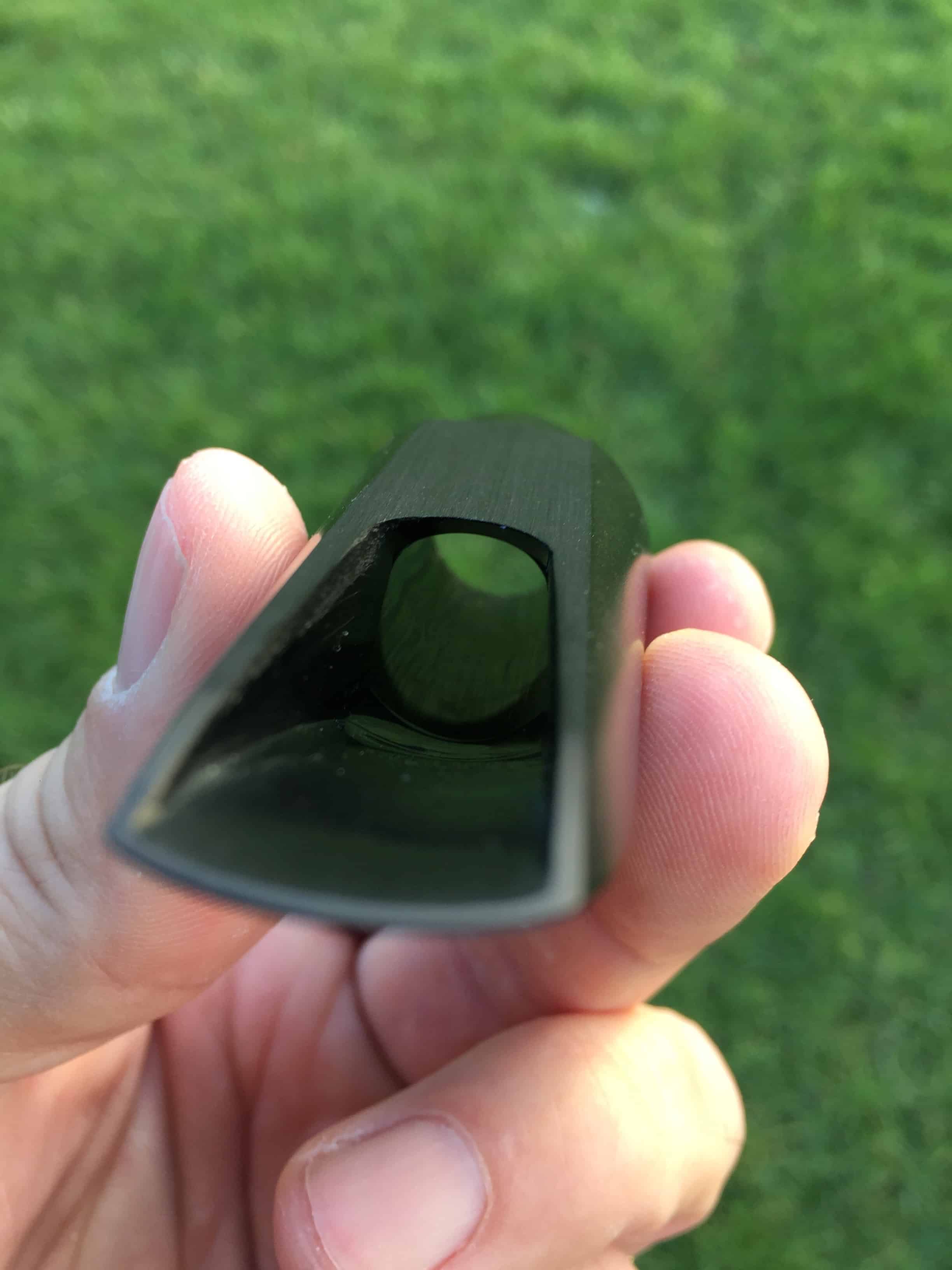 The .076 tip opening felt very comfortable for me and the mouthpiece had a clear, pure and focused tone to it that I would classify as medium bright.

At the beginning of the sound clip I start with a little of “There is No Greater Love”.  The Orion has a a nice crisp bop sound to it that really sings in the upper register.  The tone sounds light and beautiful to me.

I then go into my usual “The Summer Knows” melody that I have been playing on all of my recent alto saxophone mouthpiece reviews. I love this melody and I especially love how it sounds with the Orion alto mouthpiece!   (Also, check out the clip with a little bit of reverb added which is the second sound clip.)

I have been playing many of the same melodies and lines on my reviews lately so that listeners can more easily compare the sound clips and hear how the same lines and melodies compare to each other from mouthpiece to mouthpiece. 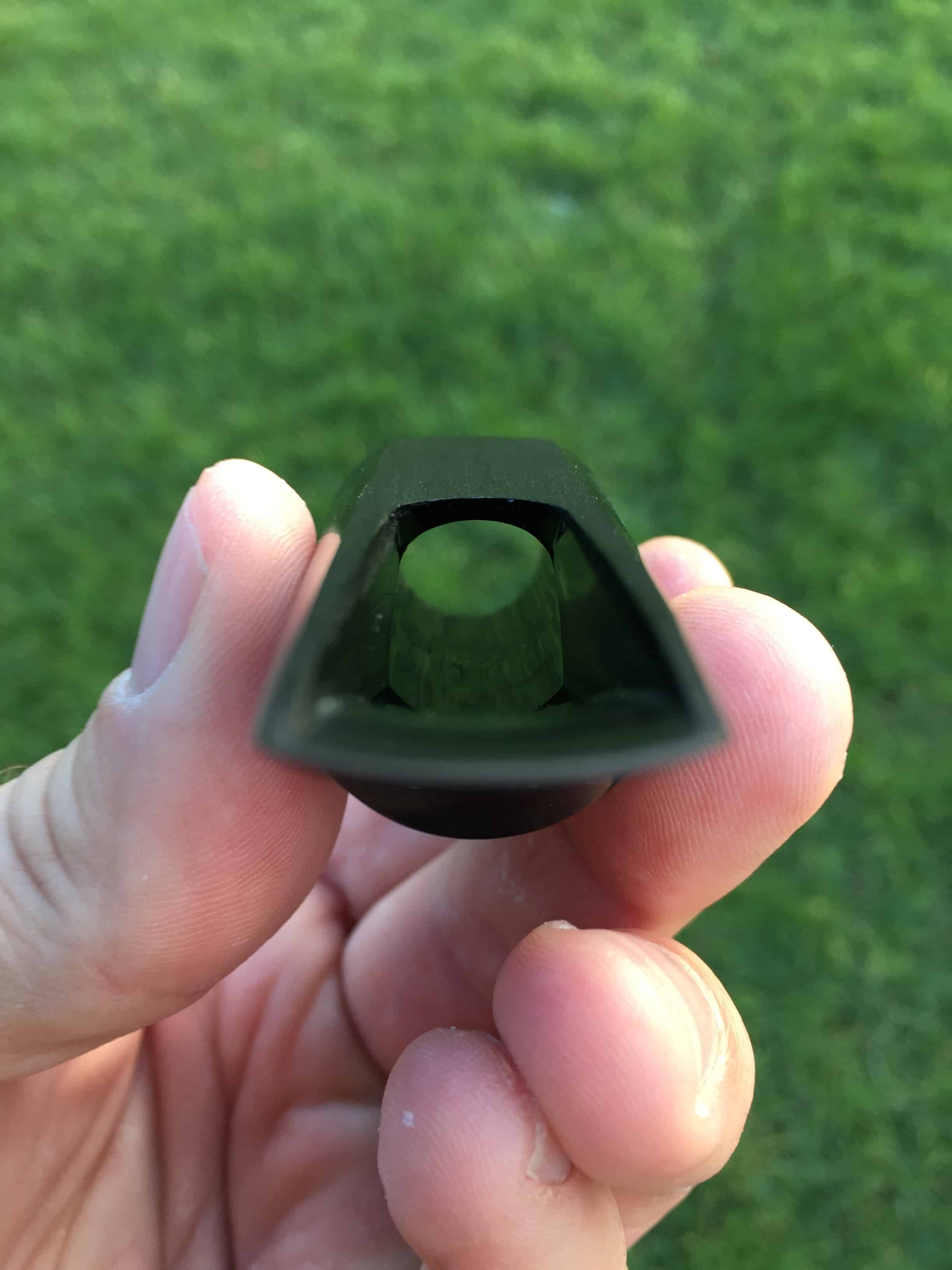 The Phil-Tone Orion’s chamber and straight sidewalls seems to give it a crisp focus of tone.  That crisp focus also makes it fun to play straight ahead lines because the crisp brightness of the tone seems to make the jazz articulation and accents “pop” a bit more in my opinion.

The Orion alto sax mouthpiece played smoothly and evenly throughout the range of the horn and the intonation was excellent.  The articulation was clean and efficient also.

I would say the Orion would rate at 7 if I was to rate it 1-10 as far as volume. It does get a bit brighter when really pushed but, as you can hear in the sound clips, I didn’t go into my usual “Sanborn” type licks.  I guess I could have, but the Orion alto mouthpiece seems more at home to me with sweet melodies and bop lines.  I was inclined to think more of Charlie Parker, Paul Desmond and Phil Woods while playing the Orion mouthpiece. 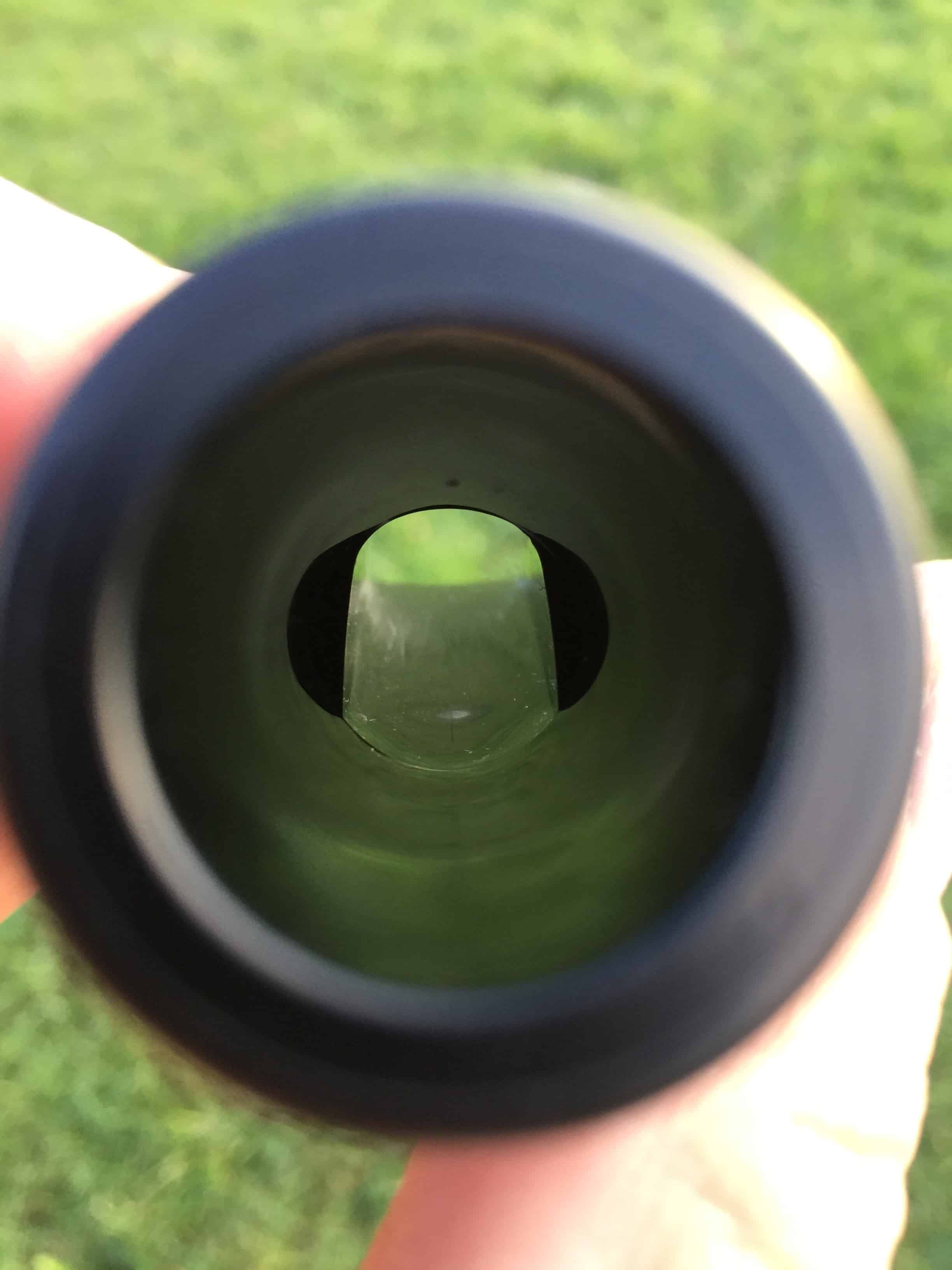 Phil has told me that he has created the Phil-Tone Orion to be a great playing alto saxophone mouthpiece at a great price.  I would have no reservations in suggesting this mouthpiece to an alto sax  student, whether young or old, who was looking to step up to a more professional mouthpiece.  In the past, I have suggested refaced Meyer mouthpieces for students but the Orion is in that same price range while giving the student a different direction and sound in my opinion.

Disclosure: I received the sample mouthpiece reviewed above for free in the hope that I would try it and perhaps review it on my blog. Regardless, I only review sax mouthpieces that I enjoy playing and believe will be good for other saxophone players to try also. Steve

Mr. Neff,  I want to thank you for sharing your God-given talents through your on-line lessons.  My husband, Michael, is blind, but he is a great sax player and he has been enjoying your lessons for quite some time now.  It’s not unusual for me to hear “Hey, babe, listen to THIS!” – and he will cut loose on his sax, just thrilled at what he learned during his session with you.  His excitement warms my heart!  You have no idea how much you have poured into my husband.  You have opened musical … END_OF_DOCUMENT_TOKEN_TO_BE_REPLACED

I’m an experienced player in the pop/soul/funk areas of music and, previously, classical.  Over the decades I’ve been playing, I’ve always felt that I could do what I needed in those styles of music.  However, recently I began to feel limited by my use of the same old licks. When I discovered Steve Neff’s website, and heard the audio examples based on the exercises in his books, I realized they were what I needed.  I purchased all of them and have been working on them since.  It’s very hard work… END_OF_DOCUMENT_TOKEN_TO_BE_REPLACED

Your material is great! I got your New Altissimo Lesson 6 months ago and I have learned more from that than in all my 44 years of playing! I appreciate your down to earth teaching method and I really appreciate the heart that you teach with. I have been a subscriber to your lessons for the past 6 months and I have learned a great deal. Over that period of time I have had some questions and you have never failed to respond. Thanks! I have already recommended your lessons to a number of players in… END_OF_DOCUMENT_TOKEN_TO_BE_REPLACED

Just a brief note to compliment you on your teaching skills and in particular for the honesty of your lessons.  I am a returning alto sax player in my 50’s and I was looking for a no nonsense, straight to the point kind of guidance. I had intended to email you with a few questions regarding the use of the bis key but then I noticed that there was a lesson on that specific topic and after viewing it,  all my questions were answered. I once took a group lesson with a well known professional sax … END_OF_DOCUMENT_TOKEN_TO_BE_REPLACED