Today, I am reviewing the new Tenor Madness EBII hard rubber tenor mouthpiece.  Randy Jones over at Tenor Madness caused quite a stir in the saxophone world when he came out with a “new” EB (Early Babbitt) version of the Otto Link tenor mouthpiece a number of years ago which I reviewed here.  At the time, there were lots of players that were really digging these new hard rubber EB mouthpieces that were being produced. 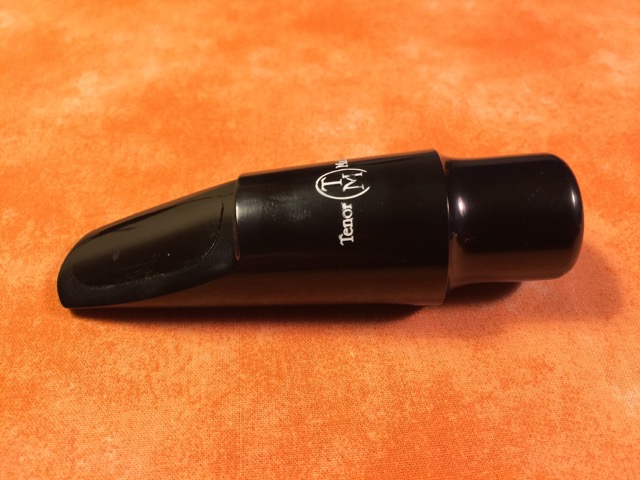 “We took everything we liked about the original TMEBs, including the slimmer, more comfortable beak, and used that as a launching point to see if we could make something even more special. Crafting and refining the dimensions of the original core was a painstaking process, but well worth it in the end. This new mouthpiece is the culmination of a 4-year journey to improve upon the original TMEB mouthpieces.

The new Tenor Madness mouthpieces are made from vulcanized rubber. These are not cut from premade bar stock and there is absolutely no CNC machining involved. Every mouthpiece is finished by hand. In our experience, mouthpieces made from molded and baked hard rubber have a unique character that you don’t find in those made from bar stock. Each one comes out of the oven with its own personality.

Our original concept has evolved into a new mouthpiece that has a clean, focused sound and excellent articulation. They are free-blowing with a quick and even response; every bit as fun to play as they are expressive. It was also a must for the mouthpiece to have some power! We wanted to provide players with something that has a clear and centered voice at fff as well as at a sub-tone. There’s a definition to the front of the note that creates a sense of excitement and momentum for line-playing. The tonal color varies, though they are generally just on the brighter side of neutral. We are happy to pick one out to suit your preferences.”

Drew at Tenor Madness was kind enough to send me 3 TMEBII 7*  mouthpieces to try.  All 3 were excellent but each had it’s own character and response to it. I had a heck of a time trying to choose the one to play for the review and honestly spent hours going back and forth between all three.  They sent me a .098 tip, a .101 tip and a .105 tipped piece.  I ended up loving the .101 and the .105 because I was most comfortable with those tip openings. I ended up choosing the .101 to review but the .105 was killin’ also.

As you can see from the pictures, Tenor Madness has changed the design of this mouthpiece from the Otto Link logo to a new Tenor Madness logo.  The rails on the one I have start a bit wider near the opening of the window get progressively thinner as they head towards the tip and then right before the tip they look to fatten up a bit as they flare out slightly.  The tip rail is very close to the shape of the tip of my Rigotti Gold reeds that I use. 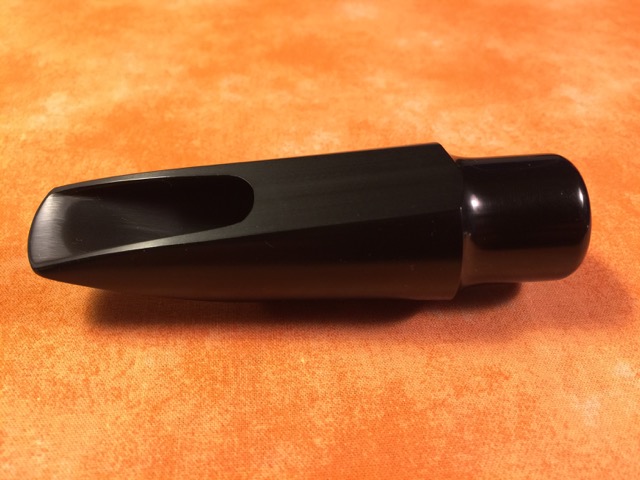 The TMEBII has a substantial rollover baffle to it just like the old EB Otto Links had.  The baffle then angles down into a  large chamber.  The descent of the baffle has a side to side curve to it as you can see from the picture of the chamber below.  The baffle looks to be a bit higher on the right hand side than the left also. I know some guys that are fanatical about evenness and perfect symmetry but  that is not so important to me.   What is important to me is how a mouthpiece plays!  (My favorite JVW Link metal mouthpiece with an added baffle also has a baffle that is higher on the right side……….) The side rails are scooped out nicely.

The other thing that struck me about the TMEBII is that it must have a very efficient facing curve.  While teaching a Skype lesson the other day, I showed a student how to do the suction test with the reed and the mouthpiece and was very surprised how long the reed stuck to the mouthpiece. I swear it was 10 to 15 seconds which is a record for me………. 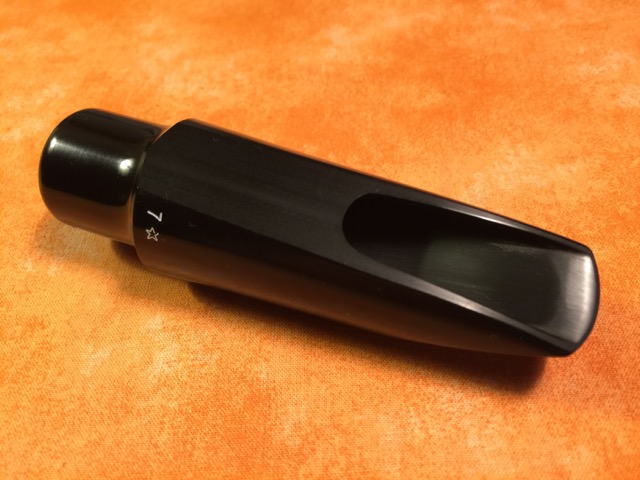 The EBII seemed to really like harder reeds for me.  I hardly ever go up to 3 1/2 reeds these days but a Rigotti Gold 3 1/2 Light reed just felt great on this mouthpiece.  It was responsive and gave a nice resistance to blow against.  The harder reed gave the tone a bit more substance and character I think. 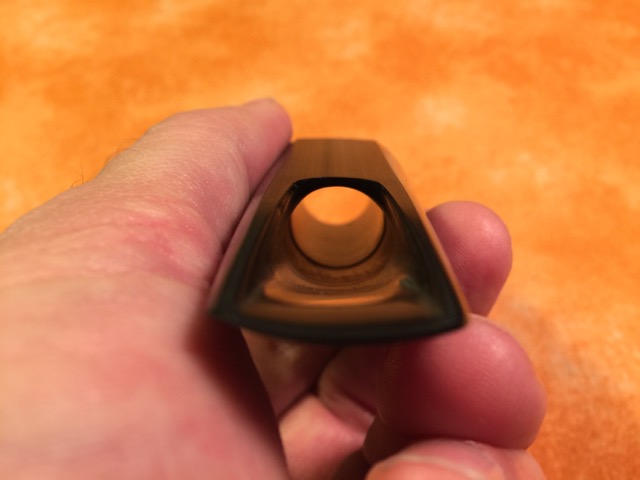 The Tenor Madness EBII was smooth throughout the range of the horn. I felt like the tone was thick and rich and did lean slightly to the brighter side.  The high notes felt round and full sounding.  Even though I could play loud with this mouthpiece I never felt like the notes in the upper register got harsh or edgy which I really liked.

I know the question will be asked “How does this compare to the first TMEB mouthpiece?” It is certainly in the same ballpark sound wise and I feel it plays and responds in a similar way as the first TMEB.  To be honest,  it is really hard to give an opinion on how they compare without having a first run TMEB here to compare side by side with the TMEBII.  All I can say is that I loved the first TMEB and I also love this new TMEBII. 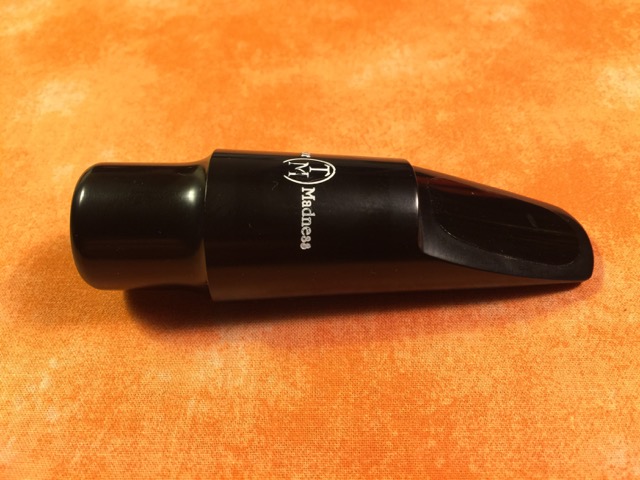 If you read this review, listen to the clip and want to try the Tenor Madness New EBII Tenor saxophone mouthpiece you can contact Tenor Madness at this link to order one or you can call  (319)234-3561 or send an email to drew@tenormadness.com. As of this review, they are offering a 7 day trial of the EBII with no restocking fee which is awesome!  Great job Randy Jones, Drew and everyone else at Tenor Madness!

I ended up recording 3 clips for this mouthpiece.   I think clip # 3 sounds the best with more highs in the sound because of the position of the mic in the room.

Clip # 1-Recorded this with too high a gain setting.

*I received a message from a fan of the site that the sound clip above was clipping in a number of places on the recording and the recording seemed to be midrange heavy to his ears.  I think I probably recorded with to high a gain by accident on this one so I will try another recording early next week.  Stay tuned…….

I recorded two more clips a week later with a lower gain to give more samples of how the mouthpiece sounds.

Clip #3-Recorded with the mic in the middle of the room.  (Clip 1 & 2 were recorded on a desk with a wall behind the mic) This clip seems brighter to me because of the different mic position.

I think with all 3 of these clips you can get a good sense of how the mouthpiece sounds for me. Steve

I just started looking at my lessons and I have to say, dude you are awesome.  I ABSOLUTELY will learn from you!  I started the tenor about 1 ½ yrs ago and have since picked up an alto, and more recently a soprano.  I spend most of the time on the tenor, followed by soprano, and have only gotten to the alto a few times.  I think I’ll be sticking with tenor.  I’m having a great time and hope one day to play well enough to get regular gigs.  I’ve been playing keys for about 35 years (… END_OF_DOCUMENT_TOKEN_TO_BE_REPLACED